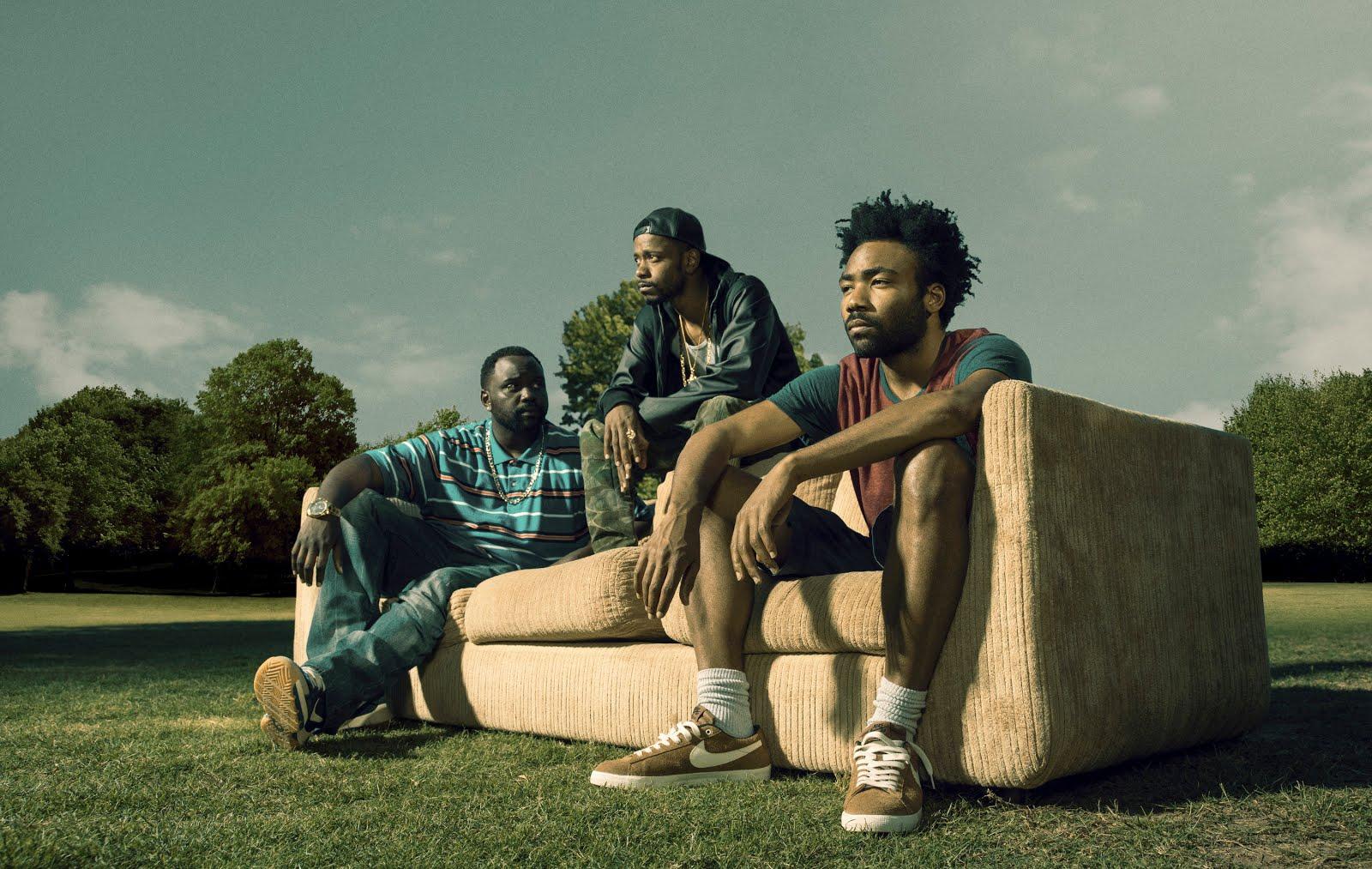 Invisible cars, kids in white face and a black Justin Bieber. Amidst scenes of shootings, prison and vicious drug deals, “Atlanta,” Donald Glover’s alternative, dreamy think piece on the state of race in America is saved from the dark depths of depression and gloom by a vibrant collection of odd moments and paradoxical characters.

The compelling trio that is the main cast features Princeton-dropout Earn, his drug dealer cousin, Alfred Miles (Brian Tyree Henry) and Alfred’s chronically-stoned associate, Darius (Keith Stanfield). Viewers follow Earn as he tries his hand in the music industry, hoping to guide Alfred in the world of hip hop and launch his career as a rapper under the stage name Paper Boi. However, their hustling quest is more of an afterthought, as the primary focus of the show is on the personal lives of the characters, with Darius offering comic relief in the form of baked epiphanies.

“Atlanta” is exactly what you’d expect from the multi-talented, quirky producer Glover. With lots of offbeat humor and an indie-film vibe, it’s full of Glover’s eccentricity — a black version of “Twin Peaks,” as described by Glover himself. In an interview with National Public Radio, Glover said that “Atlanta” depicts the “surreal nature of the human experience.”

From stand-up comedy, to a writing job for “30 Rock,” to the role of the nerdy football player as Troy Barnes in Community, to a brief appearance in Lena Dunham’s “Girls” and of course, as rapper Childish Gambino, Glover has solidified his presence in many niches of creative expression. For “Atlanta,” he worked together with an all-black team of writers, including his brother Stephen, (who recorded the “Paper Boi” track that makes Alfred famous in the show,) and director Hiro Murai, who shot many of Childish Gambino’s music videos.

Earn and Alfred’s intentional juxtaposition epitomizes the two “types” of African-American men. Earn is Ivy-educated, proper English speaker, and is accepted by American society; Alfred is a gangster rapper who sells drugs and is the victim of systemic racism. This point is made clear in Episode five: “Nobody Beats the Biebs,” when a reporter tells Alfred: “They want you to be the a**hole. You’re a rapper. That’s your job.”

As the season unfolds, the complexity and nuances of the characters are revealed. Alfred puts on a tough thug persona, but we start to see his vulnerability through his insecurity and self-doubt as he grapples with the odd encounters that come with Paper Boi’s fame.

In another scene, Alfred and Darius are smoking weed in Alfred’s car in the parking lot of a liquor store when Alfred hollers at a young woman, exclaiming, “Ay girl, that’s me on the radio.” However, he is immediately admonished by the woman in the lot.  Though Alfred hurls a sharp remark back to the woman, the viewer sees through his tough facade and comes face to face with Alfred’s insecurity. There is also some comical irony in Alfred’s inadequacy as a drug dealer due to his fearful nature.

Although partially educated at Princeton, Earn is basically homeless and struggles to make money. We see him as he tries to hustle as Paper Boi’s manager and indulges in the fast lifestyle, having one-night stands, smoking and drinking heavily. He simultaneously tries to be a good father to his baby daughter and mend a confusing relationship with his girlfriend Van (Zazie Beetz).

In crisp 30-minute episodes, the show manages to lay out hard-hitting social issues in an approachable way by presenting them under unconventional spotlights. In “Streets on Lock,” Earn waits in jail for his case to be read. While he’s waiting, he witnesses the prison workers violently beating a man with an obvious mental illness. In another harrowing scene in “Go for Broke,” Darius and Alfred carry out a drug deal in the middle of the woods where they witness someone being held captive, and later shot as he tries to get away. Despite this traumatizing event, the mood of the episode isn’t dark. Dark themes like police brutality, incarceration, shootings and drug deals could coagulate into an oppressive, depressing gloom, but “Atlanta” manages to weave in humor and bizarre moments to avoid depressing and demoralizing viewers.

Then there are episodes that aren’t dark, but merely strange. In “Juneteenth,” Van and Earn attend a Juneteenth celebration in a high-class neighborhood in an effort to network to secure Van a high-paying job. The white husband of the interracial couple that Van and Earn meet is obsessed with black culture and makes several uncomfortable attempts to connect with Earn. We watch his failed casual handshake when they first meet, then his insistence that Earn must visit Africa to connect back to his roots, then him making Earn sit front row while he performed a spoken word beginning with “Jim Crow has the name of a man, but is a ghost, but Jim Crow is haunting me.” In this episode, Glover tries to suggest to the audience that no matter how hard white people try or how good their intentions are, they can never truly empathize with African-Americans or know what it’s like to be African-American.

The most creative, thematically-layered and thought-provoking episode is the seventh: “B.A.N.” The whole half-hour is made to look like a real talk show, mixed with satirical commercials that almost seem real. In one memorable commercial, a kid’s cereal much like Trix or Cookie Crisp is being advertised. But then, the cartoon character, something resembling a wolf or wild dog, tries to steal the kids’ cereal and is wrestled to the ground and handcuffed. While the animal is being arrested, the children are trying to convince the officer that the animal can have their cereal, but he ignores them. This depiction of police brutality is in such an unorthodox place that only Glover could have thought it up.

The “talk show” features Paper Boi arguing about racial and gender identity with another guest, a fictional white, liberal feminist named Deborah Holt. Holt tries to warp Paper Boi’s words to portray him as a transphobic, ignorant and objectifying rapper. But at the end, much to the host Franklin Montague’s dismay, the two make amends.

Interestingly, the last episode of the season does not feature a lot of the dry humor and jokes, which creates a somber effect. When dark things happen, like when Alfred, Earn and Darius see someone get shot, the mood remains heavy, the scene lacking an offbeat joke or weird spiritual observation from Darius.

In the final scene, as the parties, club scenes and banter between the three are stripped away, Earn is left sleeping on a makeshift bed in his storage unit with his headphones in. It is obvious that Paper Boi did not become hugely successful, but Earn’s relationship with Van is stable, and there’s a sense of acceptance of his state in the world as he sifts through two crisp Benjamins from Paper Boi’s profits.

“Atlanta” adds to the conversation about race in weird, unconventional ways and portrays an authentic version of African-American culture. Each shot, each image, each mannerism of even the most peripheral characters is methodical. Glover’s heavy-handed sureness and presence imbues startlingly human emotion in “Atlanta,” which lends the show a depth and relatability that allows the audience to profoundly understand Earn and each character.