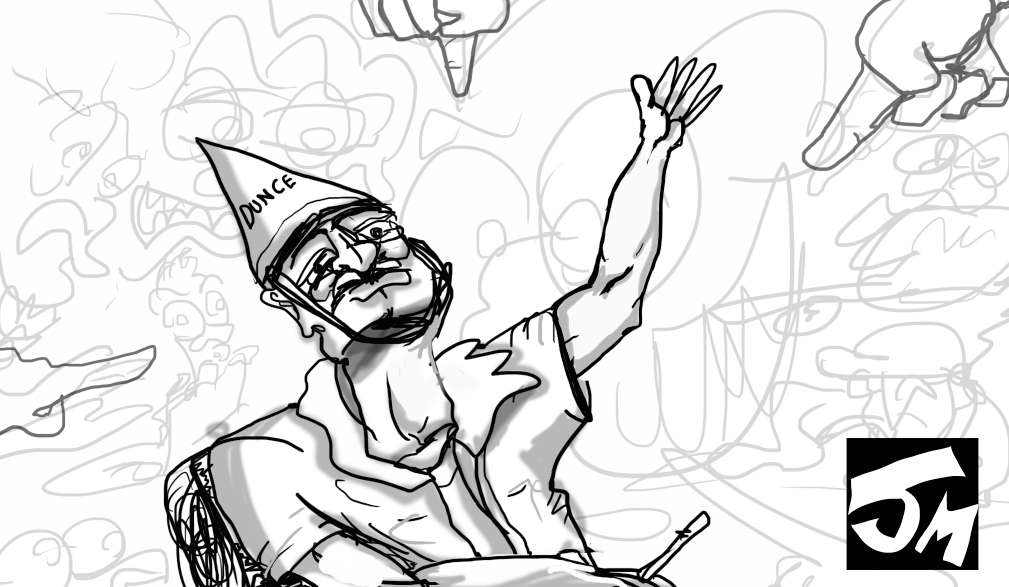 In the classroom, questions must go without judgement

Joseph Yang
Opinion
November 16, 2016
When I was in chemistry class two years ago, my teacher, Mr. Bowditch, dispensed one of the most nuanced truisms that I’ve ever heard: “compared to me, you guys basically know next to nothing.” The class’s reaction was pretty much, “no duh, you have a Ph.D. in organic chemistry” and the rest of my fellow classmates continued about their business titrating hydrogen peroxide with who knows what.

For me, however, those words struck a chord about an issue that I have been considering for quite some time: knowledge. Compared to professionals and even graduate school students, even the most intelligent of high schoolers know little compared to the expertise of seasoned academics. And yet, sometimes we get carried away with a class structure that emphasizes status over talent.

Growing up in Palo Alto, many of us are imbued with the perception that somehow Silicon Valley and its denizens are superior to the citizens of other areas in the country and, indeed, the world. Articles from prominent newspapers with titles such as, “The tech hub that weathered the financial crisis,” “The White House looks to the Silicon Valley as a model for the technology industry” and “How the Silicon Valley came to dominate the tech industry,” to name a few, reaffirm this image of class and pride.

In truth, Silicon Valley is indeed one of the innovative and prominent tech centers in the world. And yes, it is deserving of some pretty high praise. Whether any of us do is an entirely other matter. However, we are fundamentally students, not social critics. If overall socioeconomic trends prove valid, the vast majority of Paly students are only at the beginning stages of their lives.

And yet, somehow there exists the tendency for us to own up to the accomplishments of our fathers and forefathers as if those achievements were our own. In many ways, the identity of the region we live in has become a reflection of how we behave and interact towards others, which is not necessarily a bad thing. Having a sense of regional pride can be laudable, especially if you live in Chicago and have waited for the Cubs to win the World Series for over 100 years.

But there is a difference between using regional pride as an individualizing agent and using pride as a judgemental one. All of us, have yet to prove our stripes, and deserve to live with that sort of asphyxiation on superiority.

Life hasn’t molded us to the point where we have the right to be so judgemental towards our peers, regardless of whether or not we received an A in chemistry.

Just ask any graduate school student in physics and it is clear that the difference between an excellent AP Physics student and a bad one is negligible.

Besides motivation to succeed, there is little to no difference between someone who does well in school and someone who does well throughout their lifetime.  The one theme that somehow appears over and over again in the mainstream media is success after failure or even failure after success.

The paradox of the child prodigy (child prodigies that are disproportionately less successful than their less talented peers) and the non-caring genius must be tropes that exist in American society for some reason.

Perhaps, hundreds of years of human history are incorrect and school is the single path to a person’s success in life. Perhaps, a person’s potential and indeed, their entire legacy, banks on whether the grade they get in U.S. History is a C.

Perhaps we could stand up to Mr. Blackburn in a debate about macroeconomics. Perhaps. But seriously, when have humans had that much foresight or intelligence?