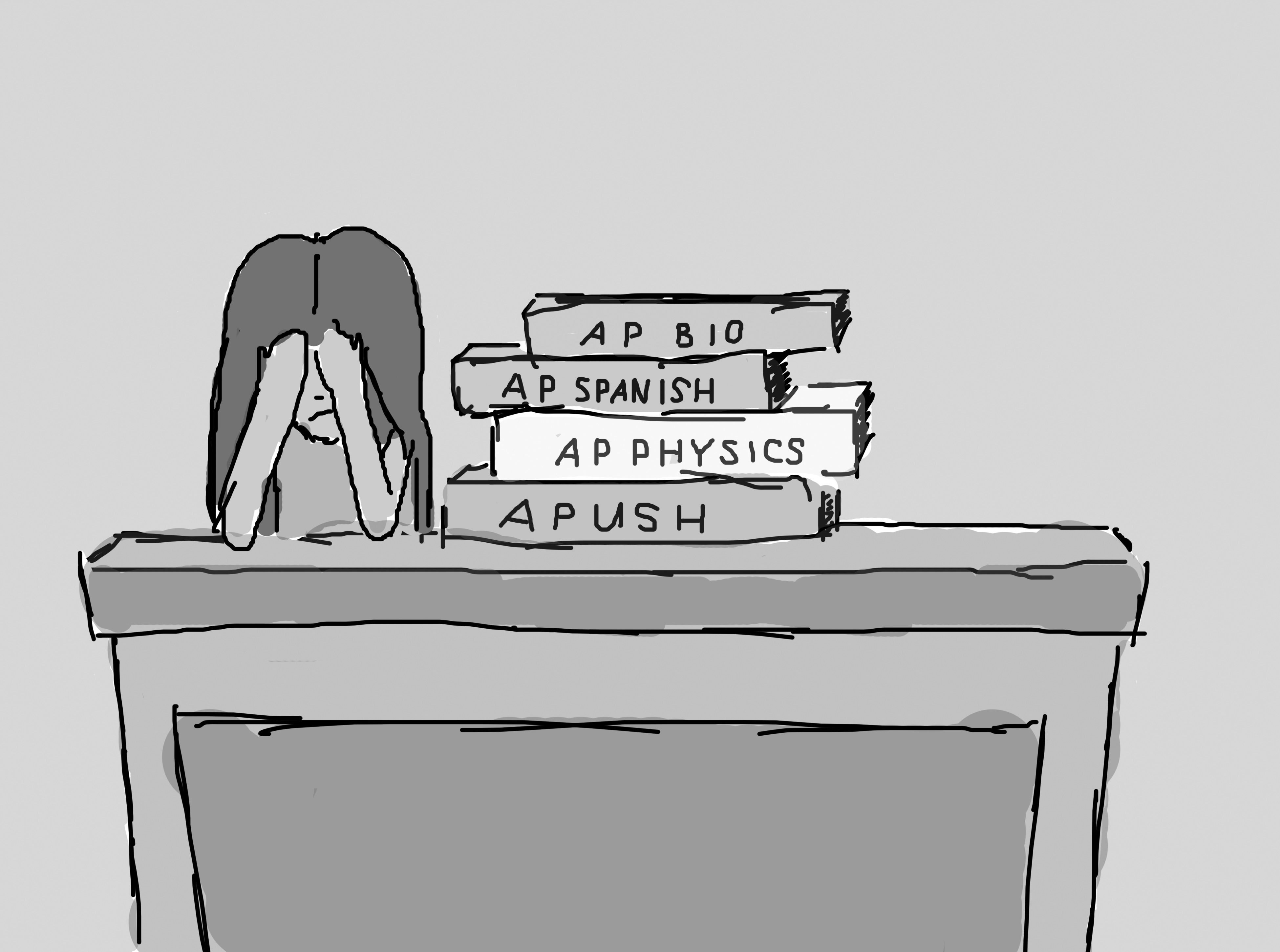 Limiting number of APs students can take will decrease stress

Jared Stanley
Opinion
November 16, 2016
We all know that stereotypical Palo Alto High School student who takes five or more Advanced Placement (AP) classes and strives to go to college across the street. Many students take on the burden of AP classes with the idea that the more AP classes they take, the more likely they are to be able to attend a more prestigious college. In an interview, one student even admitted he only took certain AP classes because they “look good” on a college transcript. Some students have no interest in learning in their AP classes and only take these courses in order to boost their grade point average (GPA). For these reasons, Palo Alto High School should put a hard limit on the number of AP classes any student can take, or do away with AP classes completely.

Given Paly’s intense competitive environment, it is essential that our school system provides more structure for high school students in choosing classes. For many students, “their ambitions are simply bigger than their abilities.” By limiting the amount of AP a student can take, they are more inclined to take classes that they find interesting rather than taking classes to get AP credit. If a limit on the number of AP was put in place, Paly students would no longer feel the need to load up on these advanced classes and therefore decreasing the competitive environment within Paly. With the notion that students take advanced placement classes to look better on a college application, a hard limit would help decrease this pressure. By placing a hard limit of three AP classes per student, Paly ensures that its enrollees can both challenge themselves and be looked upon by admissions officers as taking equally rigorous course loads as all their peers. Many other prestigious public schools such as Scarsdale High School in New York have recognized the advantage of limiting the number of AP classes a student can take and have even gone through measure to completely rid their school of AP classes. Even though they no longer offer AP classes, students are still able to take AP tests at the end of the School year.  In 2007, Scarsdale was named the most prominent school district in the nation to phase out AP courses according to the New York Times. Ever since the school got rid of their AP classes, they have seen impressive results. According to the New York Times, “49 percent of the 2008 graduating class are attending the nation’s most competitive colleges — a group of about 80 schools identified by Barron’s Profiles of American Colleges that includes the Ivy League — compared with 45 percent in 2007.” Instead of offering AP classes, the school now offers Advanced Topic classes — similar to honors or advanced classes at Paly –— whose curriculum is similar to that of the AP curriculum however additional study is needed in order to prepare for the AP exam.

Given the intense competitive environment, it is essential that our school system provides more structure for high school students in choosing classes.

The school was seen an increase in the average scores of five AP test subjects and a decrease in just two subjects. Finally, limiting or even getting rid of AP classes would allow students to study what they are truly passionate about. By placing such a strong emphasis on how many AP classes a student takes at Paly, we single out those students who find their passion in art, dance or even journalism. The positive results yielded from Scarsdale should act as a precedent for what should be done at Paly. Many students and parents may say that AP classes allow high school students to get college credit, but many prestigious schools such as MIT do not even allow AP credits at their school. The Social Justice Pathway at Paly is a step in the direction that we as a school should be heading.