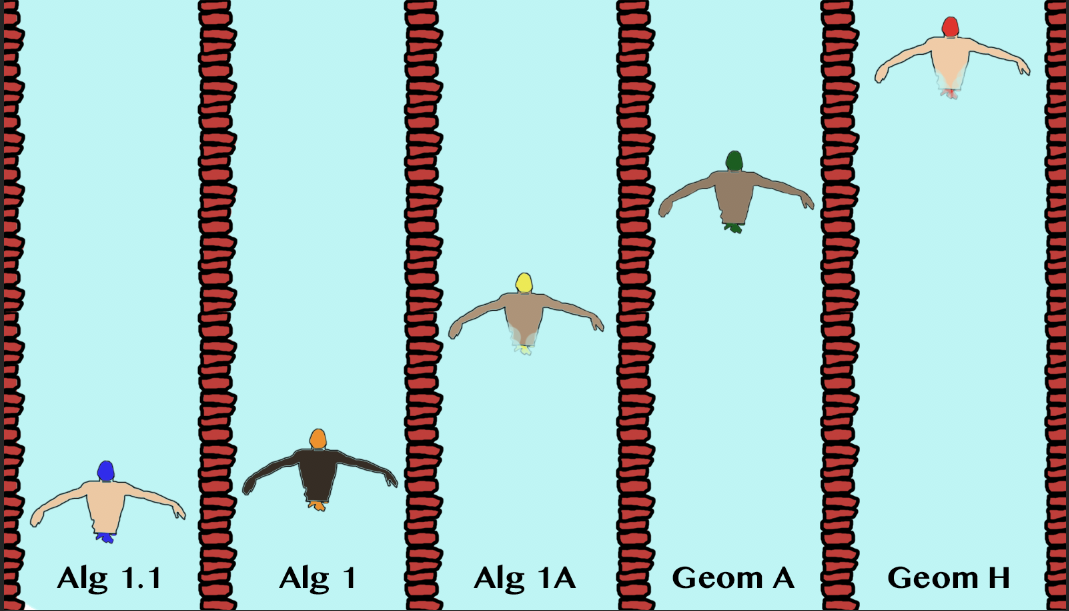 Grace Kitayama
Opinion
November 16, 2016
Struggling students placed in the lowest math lane may come to the conclusion that they are just “not a math person.” From the beginning of seventh grade to graduation, students in the Palo Alto Unified School District (PAUSD) are placed into different levels of math classes based on a test they take at the end of their first year of middle school. Though this system of math laning has been in place for years, and may seem like a logical one, it can also be detrimental to students’ success in school in all lanes. This is especially true when they are divided into these levels so early on in their school careers.

When students are divided in such a way, they can begin to believe that they are naturally “gifted” or “ungifted” at math. This can harm their progress later on in life.

Believing in giftedness promotes a fixed mindset. A fixed mindset holds the belief that one is born with a certain set of skills, and that there is nothing that one can do to develop those skills. Students who believe that they are, and always will be, bad at math will simply continue to fall short of their potential. On the other hand, students who think that they are naturally skilled suffer as well, as they may be deterred from asking questions or taking risks for fear of making mistakes and no longer being deemed “gifted” by those around them. By prioritizing natural skill over the willingness to learn from mistakes, the math laning system instills in children a misguided set of values.

Students are not the only ones who believe that certain people can possess a natural talent for math. In holding the belief that some students are naturally better at the subject than others, professors will tend to show bias against certain students. According to Science Magazine, nationwide, math professors had the most fixed opinions about who could learn and who could not. Though the current system of math laning can have a negative impact on students in class, it would be difficult to change the math laning system that is currently in place entirely.  However, if students and teachers throughout all of PAUSD were to look at how we learn objectively, without fear of failure or the stress of not being able to live up to predetermined expectations, all students would be able to achieve a greater level of success in math as well as other subjects.

An example of this is Paly’s English Department. This year, the department combined advanced and normal levels of English for freshmen and sophomore students because there was such low enrollment in the normal English level. However, students did not seem affected by the change.

“Students choose which class to take,” said head of the Paly English Department Shirley Tokheim. “All incoming freshmen chose 9A and all freshmen (currently in 9A) this year chose 10A for next year.”  Though English is an equally challenging class, students look at it differently than math. When students believe that they have a better chance of succeeding, they actually perform better.

According to YouCubed, a Stanford based organization dedicated to inspiring students to succeed in math, students who believe in their abilities and their ableness to improve will have drastically more success in school than those who do not.

Though math laning may be an efficient way of teaching students at different levels, it discourages students from reaching their full potential.

Therefore, if students at Paly stopped looking at math as a natural talent but rather a constantly developing skill, they would have a greater success rate in class as well as outside of the classroom.