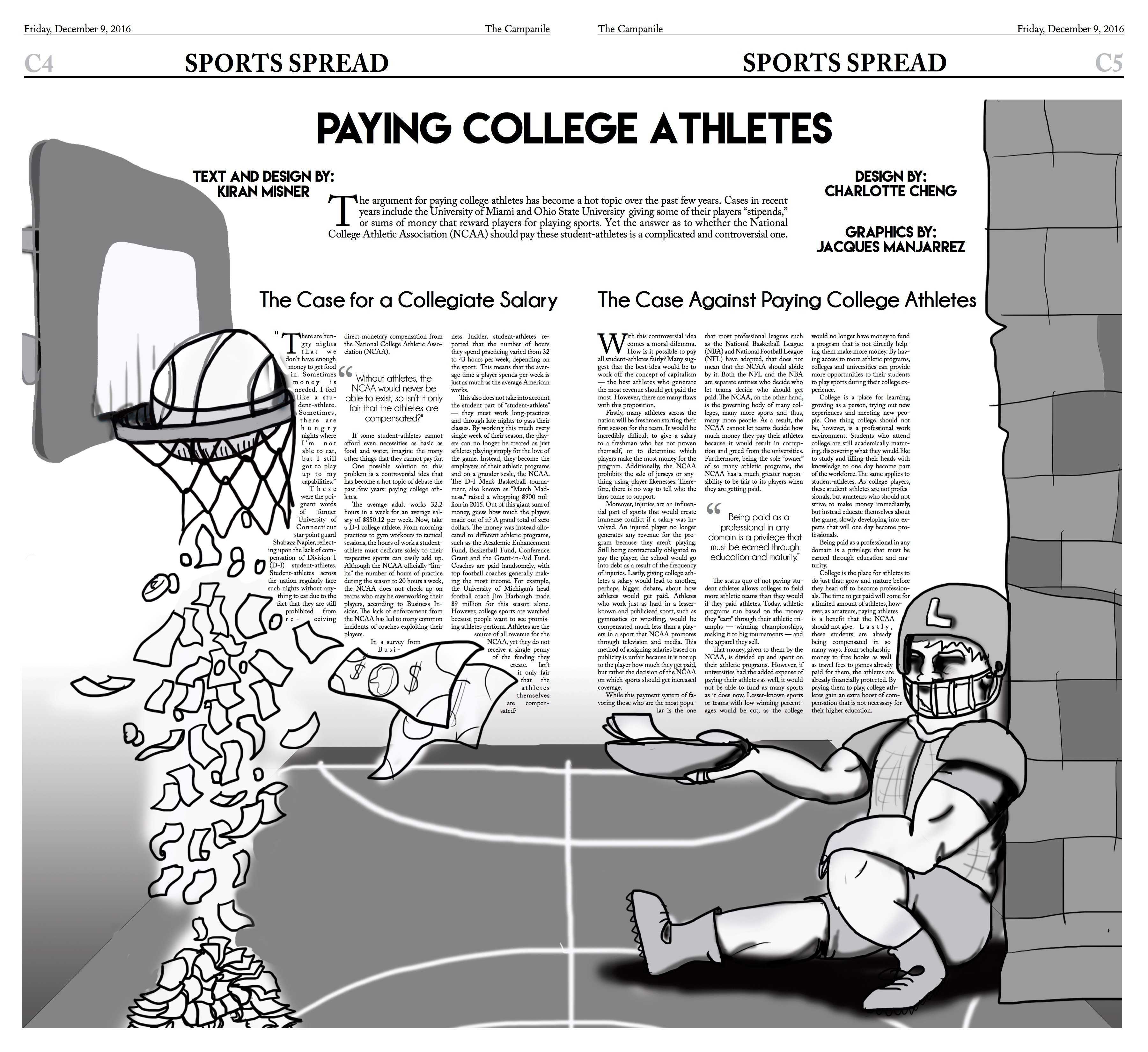 Kiran Misner
Sports
December 7, 2016
The argument for paying college athletes has become a hot topic over the past few years. Cases in recent years include the University of Miami and Ohio State University  giving some of their players “stipends,” or sums of money that reward players for playing sports. Yet the answer as to whether the National College Athletic Association (NCAA) should pay these student-athletes is a complicated and controversial one.

The Case for a Collegiate Salary

These were the poignant words of former University of Connecticut star point guard Shabazz Napier, reflecting upon the lack of compensation of Division I (D-I) student-athletes. Student-athletes across the nation regularly face such nights without anything to eat due to the fact that they are still prohibited from receiving direct monetary compensation from the National College Athletic Association (NCAA).

Without athletes, the NCAA would never be able to exist, so isn’t it only fair that the athletes are compensated?

If some student-athletes cannot afford even necessities as basic as food and water, imagine the many other things that they cannot pay for.

One possible solution to this problem is a controversial idea that has become a hot topic of debate the past few years: paying college athletes.

The average adult works 32.2 hours in a week for an average salary of $850.12 per week. Now, take a D-I college athlete. From morning practices to gym workouts to tactical sessions, the hours of work a student-athlete must dedicate solely to their respective sports can easily add up. Although the NCAA officially “limits” the number of hours of practice during the season to 20 hours a week, the NCAA does not check up on teams who may be overworking their players, according to Business Insider. The lack of enforcement from the NCAA has led to many common incidents of coaches exploiting their players.

In a survey from Business Insider, student-athletes reported that the number of hours they spend practicing varied from 32 to 43 hours per week, depending on the sport.  This means that the average time a player spends per week is just as much as the average American works.

This also does not take into account the student part of “student-athlete” — they must work long-practices and through late nights to pass their classes. By working this much every single week of their season, the players can no longer be treated as just athletes playing simply for the love of the game. Instead, they become the employees of their athletic programs and on a grander scale, the NCAA. The D-I Men’s Basketball tournament, also known as “March Madness,” raised a whopping $900 million in 2015. Out of this giant sum of money, guess how much the players made out of it? A grand total of zero dollars. The money was instead allocated to different athletic programs, such as the Academic Enhancement Fund, Basketball Fund, Conference Grant and the Grant-in-Aid Fund. Coaches are paid handsomely, with top football coaches generally making the most income. For example, the University of Michigan’s head football coach Jim Harbaugh made $9 million for this season alone. However, college sports are watched because people want to see promising athletes perform. Athletes are the source of all revenue for the NCAA, yet they do not receive a single penny of the funding they create. Isn’t it only fair that the athletes  themselves are compensated?

The Case Against Paying College Athletes

With this controversial idea comes a moral dilemma. How is it possible to pay all student-athletes fairly? Many suggest that the best idea would be to work off the concept of capitalism — the best athletes who generate the most revenue should get paid the most. However, there are many flaws with this proposition.

Firstly, many athletes across the nation will be freshmen starting their first season for the team. It would be incredibly difficult to give a salary to a freshman who has not proven themself, or to determine which players make the most money for the program. Additionally, the NCAA prohibits the sale of jerseys or anything using player likenesses. Therefore, there is no way to tell who the fans come to support.

Moreover, injuries are an influential part of sports that would create immense conflict if a salary was involved. An injured player no longer generates any revenue for the program because they aren’t playing. Still being contractually obligated to pay the player, the school would go into debt as a result of the frequency of injuries. Lastly, giving college athletes a salary would lead to another, perhaps bigger debate, about how athletes would get paid. Athletes who work just as hard in a lesser-known and publicized sport, such as gymnastics or wrestling, would be compensated much less than a players in a sport that NCAA promotes through television and media. This method of assigning salaries based on publicity is unfair because it is not up to the player how much they get paid, but rather the decision of the NCAA on which sports should get increased coverage.

While this payment system of favoring those who are the most popular is the one that most professional leagues such as the National Basketball League (NBA) and National Football League (NFL) have adopted, that does not mean that the NCAA should abide by it. Both the NFL and the NBA are separate entities who decide who let teams decide who should get paid. The NCAA, on the other hand, is the governing body of many colleges, many more sports and thus, many more people. As a result, the NCAA cannot let teams decide how much money they pay their athletes because it would result in corruption and greed from the universities. Furthermore, being the sole “owner” of so many athletic programs, the NCAA has a much greater responsibility to be fair to its players when they are getting paid.

Being paid as a professional in any domain is a privilege that must be earned through education and maturity.

The status quo of not paying student athletes allows colleges to field more athletic teams than they would if they paid athletes. Today, athletic programs run based on the money they “earn” through their athletic triumphs — winning championships, making it to big tournaments — and the apparel they sell.

That money, given to them by the NCAA, is divided up and spent on their athletic programs. However, if universities had the added expense of paying their athletes as well, it would not be able to fund as many sports as it does now. Lesser-known sports or teams with low winning percentages would be cut, as the college would no longer have money to fund a program that is not directly helping them make more money. By having access to more athletic programs, colleges and universities can provide more opportunities to their students to play sports during their college experience.

College is a place for learning, growing as a person, trying out new experiences and meeting new people. One thing college should not be, however, is a professional work environment. Students who attend college are still academically maturing, discovering what they would like to study and filling their heads with knowledge to one day become part of the workforce. The same applies to student-athletes. As college players, these student-athletes are not professionals, but amateurs who should not strive to make money immediately, but instead educate themselves about the game, slowly developing into experts that will one day become professionals.

Being paid as a professional in any domain is a privilege that must be earned through education and maturity.

College is the place for athletes to do just that: grow and mature before they head off to become professionals. The time to get paid will come for a limited amount of athletes, however, as amateurs, paying athletes is a benefit that the NCAA should not give. Lastly, these students are already being compensated in so many ways. From scholarship money to free books as well as travel fees to games already paid for them, the athletes are already financially protected. By paying them to play, college athletes gain an extra boost of compensation that is not necessary for their higher education.