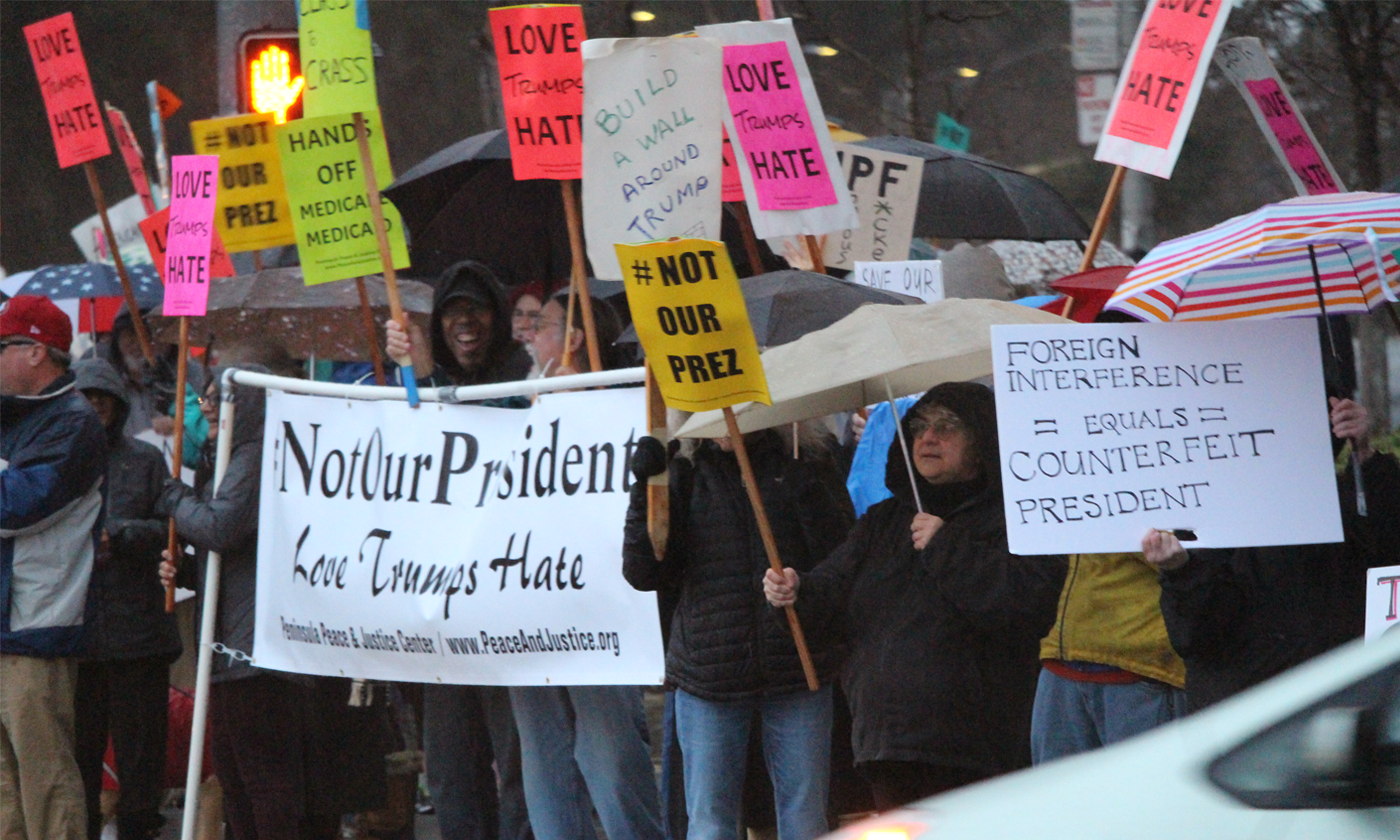 Avi Tachna-Fram
News
January 21, 2017
Waving signs with the bold declarations “Not Our President,” “Love Trumps Hate” and “Hands off Medicare, Medicaid”, protesters lined the intersection of Embarcadero Road and El Camino Real, across the street from Palo Alto High School in a full-scale demonstration against newly-inaugurated president Donald Trump.

Arriving around 5:00 PM on Friday, protesters braved the rain to chant, yell and express their outrage over the results of the November election.

“People needed to get out and release the frustrations and [anger] they’ve been feeling since Nov. 8,” said Director of the Peninsula Peace and Justice Center, Paul George, one of the protest’s organizers. “People just need that coming together right now.”

Many in Friday’s crowd of approximately 100 protesters were either too angry or disappointed to watch President Trump’s inauguration.

“It would have made me too frustrated. I can’t put [up with] the kind of words that he uses and the way he talks. I won’t be listening to anything he says, I’ll read the transcripts, but I won’t hear him talk.”

Other demonstrators wanted to send Trump a direct message.

While the crowd embodied a variety of viewpoints, a decidedly liberal umbrella encompassed the gathering. Demonstrators assailed Trump, from his potential connections in Russia to his proposed policies on health care and the environment.

“This protest is cathartic,” said Shafi Sexena, a Brand Strategist Consultant. “I feel a deep sense of grief and surrealism about what has happened with this election, about the fact that [Russia] intervened. If they had come in with tanks we would have had a reaction, but we have let Putin come in and hack our election and put a president who won three million fewer votes than Hillary in office.”

Other protesters expressed their support for policies that former President Barack Obama enacted.

“I got healthcare for the first time [under Obamacare] because I work for myself. I don’t have [employer provided health care] and I probably won’t have it soon, so I’m here for purely greedy reasons.”

The protest, which lasted around two hours, went smoothly: no violence occurred and the demonstrators were well received. Sticking to the sidewalk to avoid disrupting traffic, the protesters, a diverse group of Palo Altans, received an urban sonata of supportive honks from passing cars.

This protest was one of many taking place around the Bay Area and across the nation after Trump’s election. Anti-Trump protests also occurred in Oakland, San Jose, San Francisco and at Stanford University. Women’s marches are also taking place in Oakland, San Jose and San Francisco. As protests die down, George and other protesters are committed to making an impact on the government through persistent democratic action.

“In the future we will be going to our local congressional representatives about particular bills that are in congress, but right now it’s about coming together and setting our determination for the next four years.” George said.