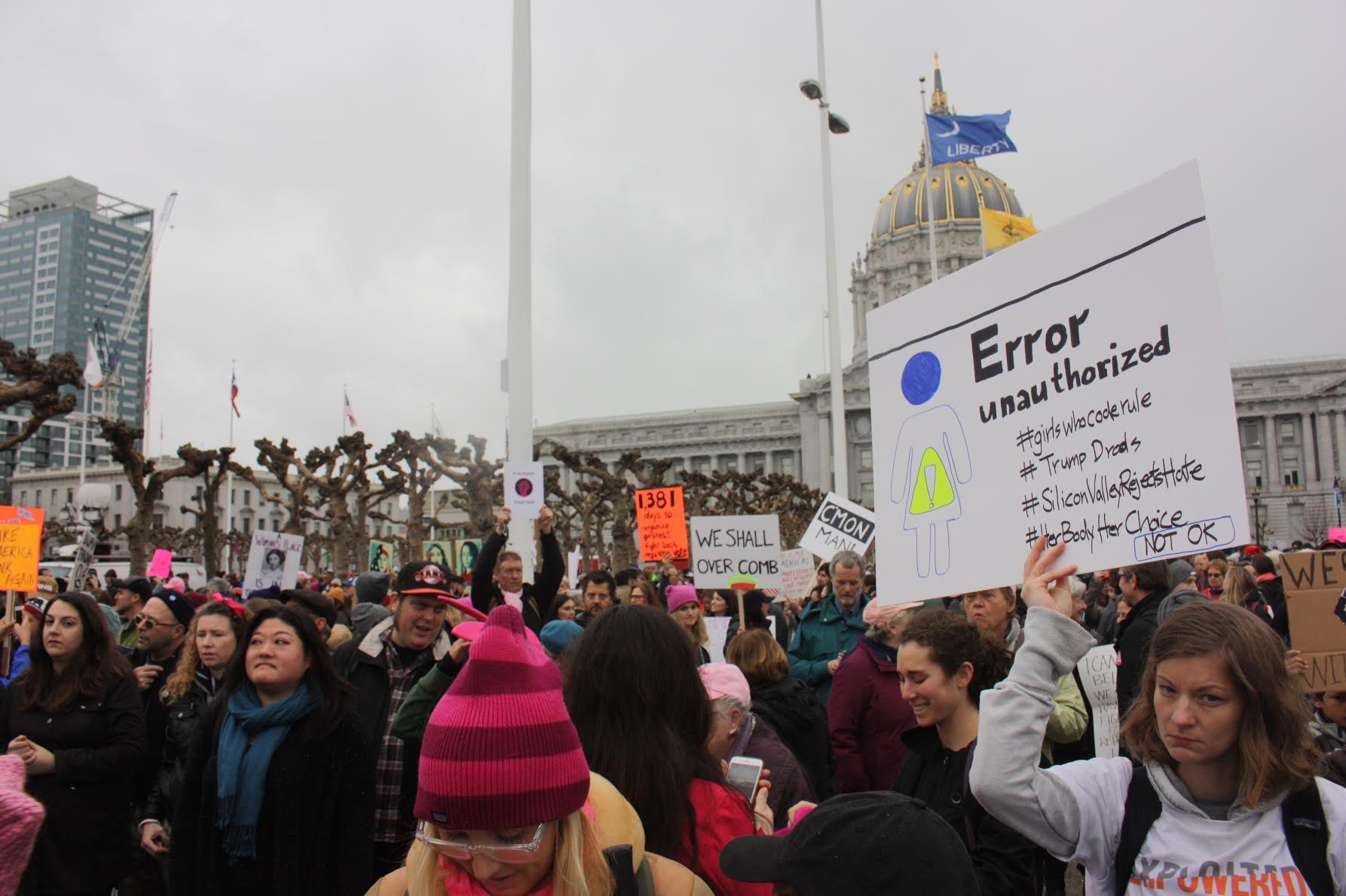 The meaning of the Women’s March to students

Gillian Robins
Lifestyle
January 31, 2017
As I neared the gold dome of San Francisco City Hall, the crowd flooding United Nations Plaza erupted into cheers. Walking down the wide red-brick road towards Civic Center Plaza, a woman in a pink-knit hat banged a staccato beat on a pair of hollow aluminum cylinders, providing fitting background music that matched the thrum of excitement in the air. The colorful signs and posters multiplied, each bearing strong messages and eye-catching visuals.

As different speakers took the stage to excite and empower the crowd, I observed the sea of pink: pink hats and balloons, signs emblazoned with bold pink letters. “We shall overcome,” “Bring back hope, impeach this dope” and “Tweet women with respect,” were just a few of the creative messages held over the crowd.

According to a Facebook post by the main organizer of the San Francisco event, Renee Lavallee Mckenna, an estimated 100,000 marchers gathered in Civic Center Plaza, before making their way down Market Street. There, trolley cars shuttled enthusiastic participants waving signs across the city. Jan. 21 marked a day of resistance to hate and an uptick in the fight for diversity, resilience and unity. These peace marches catapulted to a global magnitude, popping up on every continent, with around 700 sister marches worldwide. The Women’s March organization made it clear that its goals were not domestic, but international, as it looked to defend women’s rights worldwide. The goal was to empower women and show how their voices will not be silenced.

I attended the march to stand in solidarity with women, people of color, LGBT people and every other group that still faces inequality in the modern world. -Andrea O’Riordan, Senior

The movement was founded by Teresa Shook, a Hawaii-based retiree and grandmother who created a Facebook page the day after Trump won the presidential election. Shook first proposed the idea of a March on Washington. She teamed up with fashion designer Bob Bland along with several other activists, and decided on the Women’s March as the official name, an homage to Martin Luther King Jr.’s March on Washington in 1963 during the Civil Rights movement.

Countless A-listers performed for and stood amongst the crowds at the marches, most congregating in D.C., New York City and Los Angeles. Emma Watson, a UN Women’s  ambassador, who spoke at the HeForShe event at U.N. headquarters in 2014 on gender equality, was in attendance at the D.C. March. TV producer, writer and actress, Lena Dunham and actress Amy Poehler attended the New York City March. Others in attendance include James Franco and Joseph Gordon-Levitt.

The march triggered a series of frenzied responses from President Trump, who initially tweeted in dismay, calling out celebrities for their negative influence on the “cause” and criticizing those who did not vote. A few hours later he tweeted promoting the March, claiming peaceful protesting to be a fundamental right.

Yet the march earned significant backlash by those who interpreted it as another example of white privilege, according to the Washington Post. The majority of those who attended were white women, and there were no arrests and no encounter with police brutality. Nigerian-American blogger and author Luvvie Ajayi posted on Facebook, saying “white women and white bodies can hold space on streets and shut down cities ‘peacefully’ because they are allowed to. Black and brown people who march are assaulted by cops.” In The New Yorker, Jia Tolentino wrote in her piece “The Radial Possibility of the Women’s March” that “if we had, on Friday, inaugurated President Hillary Clinton — how many of the white women who protested on Saturday would feel as if there weren’t much about America that needed protesting at all?”

Many Paly students attended marches across the Bay, some making the trek to Washington.

Senior Andrea O’Riordan was in attendance at the San Francisco March.

“I attended the march to stand in solidarity with women, people of color, LGBT people and every other group that still faces inequality in the modern world,” O’Riordan said. “It was really important to me to participate in the democratic process in ways I could.”

Trump has bragged about sexual assault and has made countless comments objectifying women. However, the March gave senior Zoe Sego a sense of hope.

“I am hopeful for the future of women’s rights/LGBTQ rights purely based on the amount of resistance that I know the world is willing to provide,” Sego said. “If we all maintain the same level of passion we did yesterday, then there is no way that Trump can overlook our demands.”

Many are asking what the next steps are. The Women’s March initiated a campaign called 10 Actions for the First 100 Days. Every 10 days, a new action will be placed on the website for people to take part in. These actions are in the hopes of guaranteeing that women’s rights, LGBTQ rights, and others are not being oppressed by the government. The first action is to write a postcard to a Senator about an issue you are passionate about and what you will do to protect it. The Women’s March is a catalyzing symbol, and an action that echoes the proactive, “take initiative” sentiment former President Barack Obama emphasized in his farewell address: “if something needs fixing, then lace up your shoes and do some organizing.”