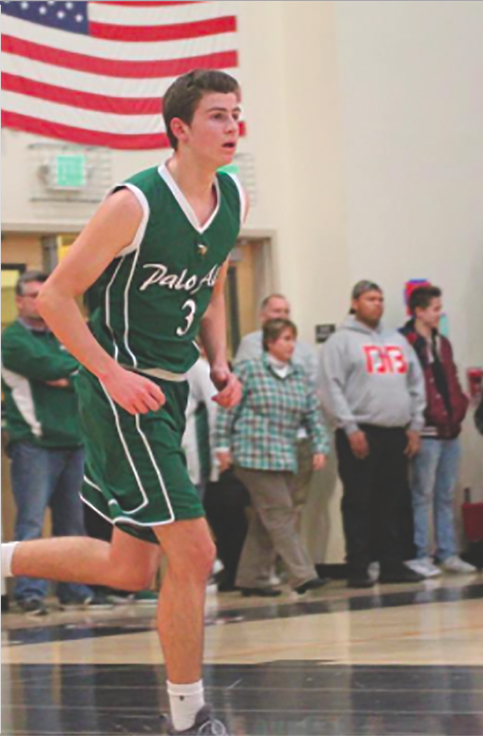 Athlete of the Month: Spencer Rojahn

The Campanile: How did you feel after hitting the game winning shot against Los Gatos to win Central Coast Sectional (CCS)?

Spencer Rojahn: It felt surreal; it felt like I was in movie. I never would’ve expected to hit a buzzer beater to win the CCS championship. It was truly unbelievable and it was a moment I will never forget.

TC: What would you like to say about the rest of the run? Any game that stuck out in particular?

SR: I think the Fremont game was an important during the run because we were down by 12 at half. In the locker room, our coach was very mad and said we weren’t playing to our potential and that we are much better than we think we are, and that we need to play confidently. We ended up going on a 13-0 run to start the second half and we ended up winning by 3 or 4. After the game our coach said “survive and advance,” which is the motto of tournament play and that’s what we continued to do throughout the run.

TC: What are your hopes for next year? Do you think you guys can replicate this year’s success?

SR: We hope to go as we did this year and maybe even further. We will lose important seniors and, most important, our star point guard, Miles Tention, but we have four returning starters and we will have a lot of experience.

TC: What would you like to say to your fans that traveled with the team? Do you think they made an impact on the team’s confidence and performance?

SR: Yes. We were a low seed and therefore all of our games were away. Our fans gave us energy which helped make it possible to beat these higher seeds. I want to thank the fans who travelled, that we really appreciated that they came out to our games and we hope that they do the same next year.

TC: Are there any seniors this year or last year that you look up to or strive to be like?

SR: I looked up to Miles Tention because he was our team leader. He played with confidence and he led our team so well; he was one of the key reasons why we went so far into playoffs.

TC: Do you plan on playing basketball in college?
SR: I do not plan on playing basketball in college, I plan on playing baseball.
TC: How has the baseball season been so far? What are some of the goals for the team and how do you think the team is doing
SR: The team is doing very well. We are on a 7 game winning streak. The goal is to win our league and then win CCS.
How would you compare yourself relative to jared in the three point dynamic as you guys are known as the three point specialists on the team
Type to search or hit ESC to close
See all results