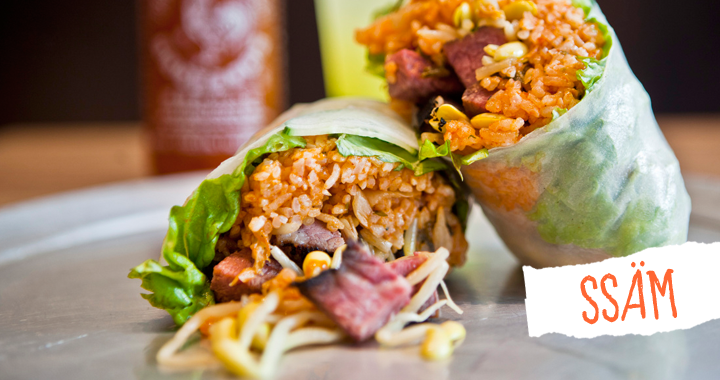 With the success of the Chipotle, many up and coming restaurants try emulate what had made it successful. Spice Kit is one of these restaurants, as its familiar industrial interior and menu reminded me of familiar atmosphere that Chipotle has granted me countless times before.

The restaurant lies in the crowd of small businesses that reside along California Avenue. The day I went there was the weekly farmer’s market, so the entire area was bustling with energy. The exterior of the restaurant shows a thin, modern building with a high roof. A couple of tables and chairs are seen just outside the eatery, and a large, metallic sign which proclaimed “Spice Kit: Street Asian Food” was hung near the roof of the building.

The interior looks much more modernized, with metal exhaust fans and lights hanging above the tall ceiling. The only contrast to this are the massive wooden panels that are hung up on the side walls, which gives the restaurant more of an earthy feeling. Despite the small interior of the restaurant, the taller-than-normal ceiling allows the restaurant to feel much larger than it actually is. Overall, the setting seems very hip and casual, with classic rock emanating from the speakers at a low volume that doesn’t interrupt diner’s conversations.

The order process is what you would expect from a fast food restaurant. After waiting in a short line, we paid for our food, and the cashier gave us the number of our food. The restaurant follows the seat yourself mantra and every item is disposable except for the red, plastic trays which held the wraps.

The menu seemed quite limited, as it pretty much only consisted of four different base options with four different types of protein that judged the price of the meal. The only other flexibility was that could be added were premium ingredients which costed more money; side dishes, and drinks. The different options for the base were a Korean wrap named ssam, a sandwich, a wrap, a salad, a Vietnamese bowl, or a Korean bowl. The choices for the protein included five spice chicken($7.80), free range beef ($8.80), roasted pork ($8.10), or organic tofu ($7.10).

I ordered the wrap with the roasted pork. From the outside, the ssam looked like a giant egg roll— the only ingredients it showed through its see-through rice wrapping was two giant leaves of dark-green lettuce. It looked like a spring roll the size of a burrito. As I cut open the middle of the wrap, the interior was filled with red rice with a bit of the other items of the ssam near the side of the wrap.

The dish itself was both flavorful and bland, depending on how much of the ssam you have eaten. The ingredients in the ssam were unevenly placed, but when I did get to eat the portions of the wrap without rice, it tasted great. Even the rice was well cooked and flavored, as although at times the flavor was constant, I felt that the wrap still tasted good. The overall texture of the ssam reminded me of a burrito, since the wrapping and consistency of the filling were all very similar. The pork in the ssam tasted both sweet and salty, and reminded me of a Cha Shao pork.

The other members of my party were able to try a tofu sandwich; a beef Vietnamese bowl; a chicken Korean bowl; one of their sides; the ginger-peanut coleslaw; and even one of their signature drinks, the calamansi lemonade. All of these dishes used similar ingredients with few deviations despite being labeled as dishes from different parts of Asia.

After finishing our meals, my group and I talked to the general manager of the Palo Alto chain named Erwin Castro. He was able to take his time and allow us to do this interview despite the shortage of staff.

“The first restaurant first opened in San Francisco in 2010, and since then expanded to both Palo Alto and San Ramon. This particular restaurant was founded in 2012, and Castro has been here since the start. The concept began when founders Will Pacio and Fred Tang, who both have a background in high dining, wanted to create a high quality experience that everyone could be able to afford. They ended up founding a restaurant that went back to their Asian roots. They made sure to use high quality ingredients that were able to reflect their backgrounds in much fanciers restaurants but at a more affordable price.”

Overall, my experience at Spice Kit was a good. The food is less expensive than it’s neighboring restaurants and is able to convey authentic tastes of Asian cuisine. Overall, my expectations for Spice Kit being a generic Chipotle clone with a bit of ethnic flair were all dissuaded and I do hope to revisit someday.

For more information, go to Spice Kit’s website at http://www.spicekit.com/