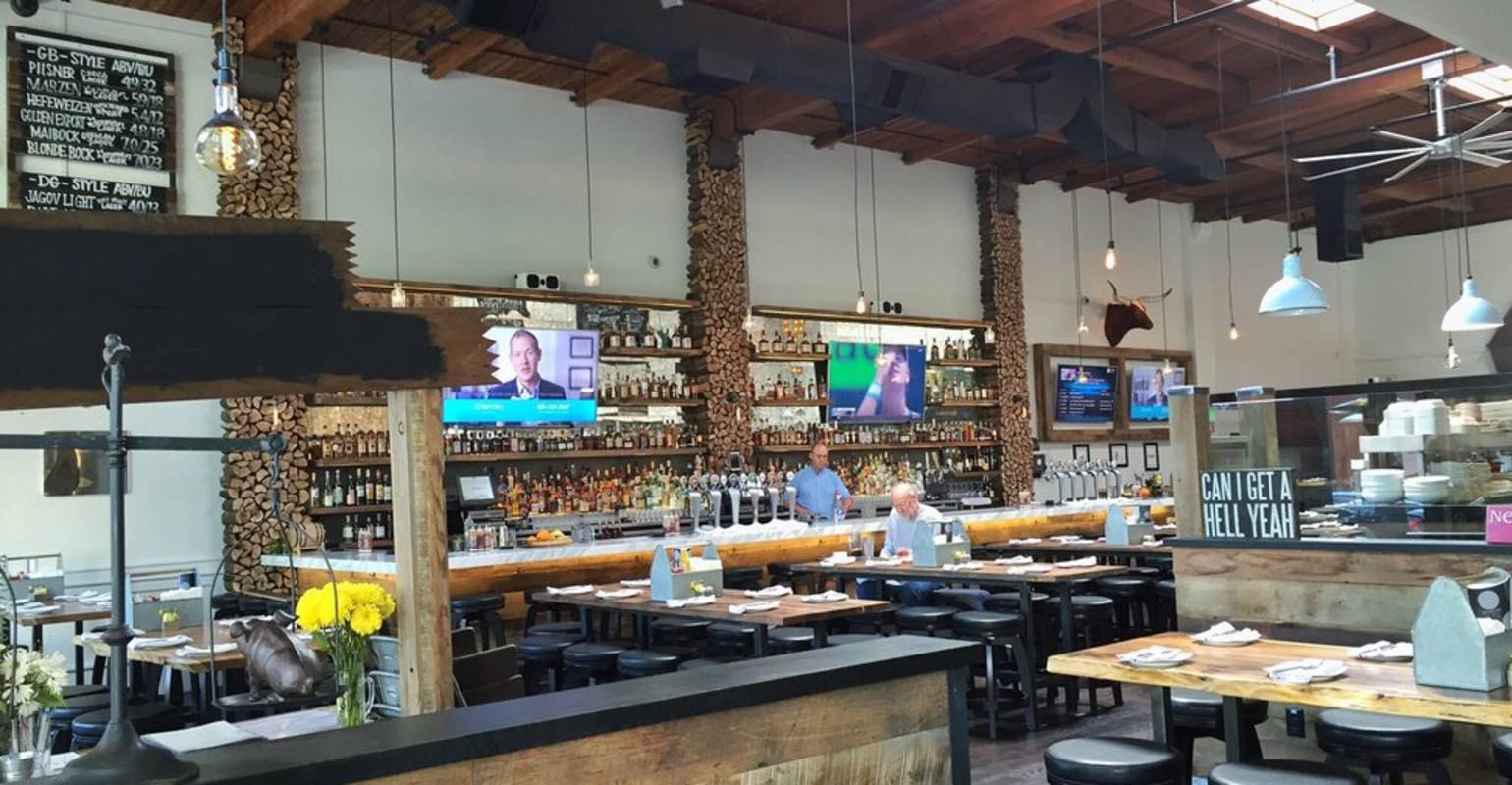 Vast open windows lined with carved oak greet hungry customers lined up at the entrance of Dan Gordon. From the exterior of the building, the soft buzz of chatter is audible and the towering shelves of liquor that lined the far left wall of the restaurant are visible.

Located at the heart of cultural food and commerce in downtown Palo Alto, Dan Gordon’s menu consists of a variety of meats inspired by Western Texas barbecue and an extensive alcohol selection.

Our party of nine was seated at a high top chestnut wood table surrounded by tall black stools covered with soft cushions. Each table held a metal bucket that held salt, pepper, ketchup, mayonnaise and the restaurant’s secret mustard mixture. The restaurant boasted it’s specialities, meat and alcohol, by displaying it’s 11 beers on tap across its bar and the 750 pound meat smoker beaming inside a glass room, directly behind our table.

Natural light from the windows and skylights, accompanied by soft 80’s disco music in the background, introduced a more upbeat, fresh yet homey ambiance to the restaurant. Wide TV screens are spread across the walls to display live-streaming of mainly American football, but occasionally other sports. Above the proud display of alcohol is a bright marquee light bulb sign that reads, “Oh hello friend”.

Immediately after we were directed to our table by the hostess, we were handed party menus – menus that were distributed to groups with eight guests or more. The options were mainly oriented around meat or alcohol, the restaurant’s two focuses. From starter plates through entrees, there seemed to be an endless variety of ways to barbecue meat.

A young cheery man, one of many in brown aprons, made his way to our table to introduce himself as our waiter for the meal and offered to take our drink orders. I ordered a roy rogers ($4), three guests ordered a shirley temple ($4), and the remaining guests settled with water. The roy rogers, via the waiter’s recommendation of his favorite non-alcoholic drink, was a delicate proportion of coke and grenadine syrup. The fizz of the coca cola tingles your tongue and is followed by the burst of grenadine flavor. Noticing our fast consummation, he waiter reminded us that refills were on the house.

Our first dish, seasoned popcorn, was brought in two baskets placed on either side of the table for us to share. Flavors of spices and pepper lingered on the roof of my mouth.

Although flavorful, the popcorn was just a teaser in comparison upcoming plates. House Smoked Wings ($14) were greedily snatched by my peers as soon as they arrived. The tender meat was covered in barbecue sauce that spilled over our lips and fingers. The first taste of Texan barbecue had been introduced, and we were hungry for more.

The Southwest Veggie Burger ($13) was an appealing opportunity to test the chef’s culinary abilities beyond meat. It came accompanied by garlic fries – there was the choice of garlic fries, or mixed greens. The patty was a tame magenta shade that was loosely shaped.

A single bite would exemplify the nicely balanced burger, consisting of a mild crunch from the lettuce and the soft consistency of both the beans within the patty, and the avocado slices.

The garlic fries, although common throughout our table, did not become tiresome among us nine hungry teenagers. The fresh fries were not overly oily, served at a pleasantly warm temperature, and had a unique and fresh sweetness to it.

Grins across our faces, and bellies full, we had no room for dessert, and concluded our

Dan Gordon himself happened to be at the restaurant, and was making his way around the building, laughing and shaking hands, to meet all of his customers. As we were chatting about our meal, Gordon introduced himself to our table. “This was just the crowd I was hoping to see”, said Gordon.

What was formerly known as Gordon Biersch, an all-American cuisine, was recently transformed to Dan Gordon’s, specializing in Western Texas barbecue and brewing of beers and whiskeys. Gordon prided himself to have partnered with the finest local farms, and boasted that he brewed in accordance to the Purity Law of 1516 – an underlying philosophy applied to their farm to table menu. Gordon told us that he grew up in the area, so he wanted to bring the unique flavor of Western Texas barbecue back home.