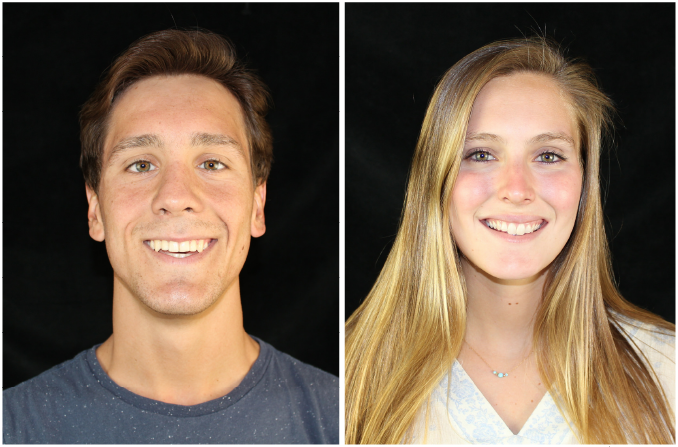 To be recruited by a collegiate Division I (DI) sport, one must be an extraordinary athlete. Palo Alto High School is unique in that this year, it hosted 29 students who have committed to schools for sports. But what about the student-athletes who haven’t signed contracts?

Senior Alex Beaudry is a starter for the Paly boys water polo team and a star on the swim team. However, he has not signed with a school. Katie Passarello is a crucial player on both the volleyball and swim team. Both practice with and play for Paly as well as outside clubs. They chose not to play for their college, but why?

Many young athletes dream of playing their sport in college and then going pro. They see famous athletes making their sport seem like a walk in the park on TV. They follow their local college athletes, who are heroes in their eyes. For Passarello, attaining this level of fame was her dream.

“I think that any competitive athlete at some point in their premature athletic career wants to play DI,” Passarello said. “I remember in eighth grade wanting to play volleyball at UCLA or at Stanford because you have these crazy expectations for yourself and you see these girls playing volleyball or these athletes playing amazing sports, and I always wanted to be that person.”

Early in their high school careers, younger athletes admire older athletes who are graduating to the collegiate level, hoping that one day they will be in the same shoes. Yet for some, there is not a school that has the perfect balance of academics and athletics. As a result, they are forced to choose one over the other.

“At the beginning of high school I was really into playing in college but then I started to realize that at the division one level it wasn’t what I was looking for,” Passarello said. “A lot of the DI programs were schools that were bigger schools that didn’t have the strong academics I was looking for or I was going to be going to college for volleyball and I wanted to get more of the educational feel. So then I went on to look at Division III (DIII). But even some of those, it was either tiny East Coast schools or I wanted something bigger. And so I never really found a perfect match of that balance between volleyball and academics. And so that’s kind of where I stopped looking at schools for the volleyball programs, and started looking at schools for the school.”

Collegiate student-athletes spend at least 40 hours a week training or practicing, according to the National Collegiate Athletic Association (NCAA). They are expected to perfectly balance their education, social lives and personal development, all while following a rigorous schedule under many critical eyes. This lifestyle requires commitment that some student-athletes are unwilling to uphold.

“I didn’t want to play DI first of all because it is kind of like a career, like having a job full time,” Beaudry said. “I really wanted to experience as much of college as possible so I felt like if I was playing sports the whole time then I wouldn’t be able to experience what being a student was like. I picked Northeastern, but it turned out they didn’t have a DIII team, so I’m doing club.”

The lifestyle of a DI athlete is a very stressful one. Many students neglect their schooling, or take easier classes than they are capable of, in order to focus on their athletics while remaining competent academically. However, fewer than two percent of NCAA athletes go on to play professional sports, according to the NCAA. Unfortunately, this results in many students sacrificing their academic career for a very unlikely professional one.

“I feel like DIII is kind of relaxed enough that you can play sports and be good at school,” Beaudry said.

Yet, being a student-athlete isn’t solely stressful. Sports can teach effective time management, according to The Daily Gazette.

“I think that having to be an student-athlete helped me with time management and organization skills,” Passarello said. “I know during season I’m a lot more stressed and I’m doing a lot less outside my sport and my schoolwork. But my grades actually seem to be better. I tend to do a better job of organizing my time and being focused. But with that said, there’s a lot of time commitment that goes into playing sports, even at the high school level. How much do I want to be dedicating? Do I want to not be able to go to parties, or dances or other sporting events?”

Considering the time commitment of college athletes playing DI, it is not surprising that over 66 percent experience burnout and overtraining at least once during their college years, according to the NCAA. Playing for a club sport is  less time consuming, and athletes are able to avoid the fear of being kicked out or stripped of their scholarship if they are hurt or decide to stop playing the sport.

“I love water polo and it’s fun [so I decided to play club rather than not play],” said Beaudry.

Sports can also build a strong social setting, making it is an easy way to be introduced to the college scene. Those who choose not to join a social group, such as a fraternity, sorority or club, might have a better time integrating into college through sports.

“I feel like being a part of a team in college builds a lot of character and you get a lot more friends that way,” Beaudry said. “And my mom said that if I joined a fraternity then she’s not paying for college, so I figured it’s either club or nothing.”

Compared to playing at a DI level, playing a club sport allows for more of a social life. Many athletes competing at a collegiate level are limited in their ability to join school clubs or other extracurriculars.

“[If I had joined volleyball] I definitely would not be able to join any clubs within the school, like community service club or outdoor club to go hiking and camping, both of which I’m very interested in potentially doing at Boston College,” Passarello said.

Attending college for sports can also be limiting. Essentially, a student-athlete’s future is in the hands of collegiate coaches –– whether or not they go to a college they like depends on if a coach wants to recruit them. Yet for club sports, students are able to factor in their interest for the school.

“I want to go where I fit, and where I actually want to go,” Beaudry said. “Where I like the people and I like the place. Sports was a factor, but it wasn’t the biggest factor for me.”

Shifting from six days of practice a week with potentially two practices a day to either nothing or only a few practices is a dramatic change.

“I think it’s going to be interesting [to go from playing volleyball to not], because I’ve been playing at a competitive level since at least the beginning of high school and I’ve always played since fourth and fifth grade,” Passarello said. “But there are a lot of athletes in my position where they didn’t want to play at the college level but they’re still pretty competitive athletes.”