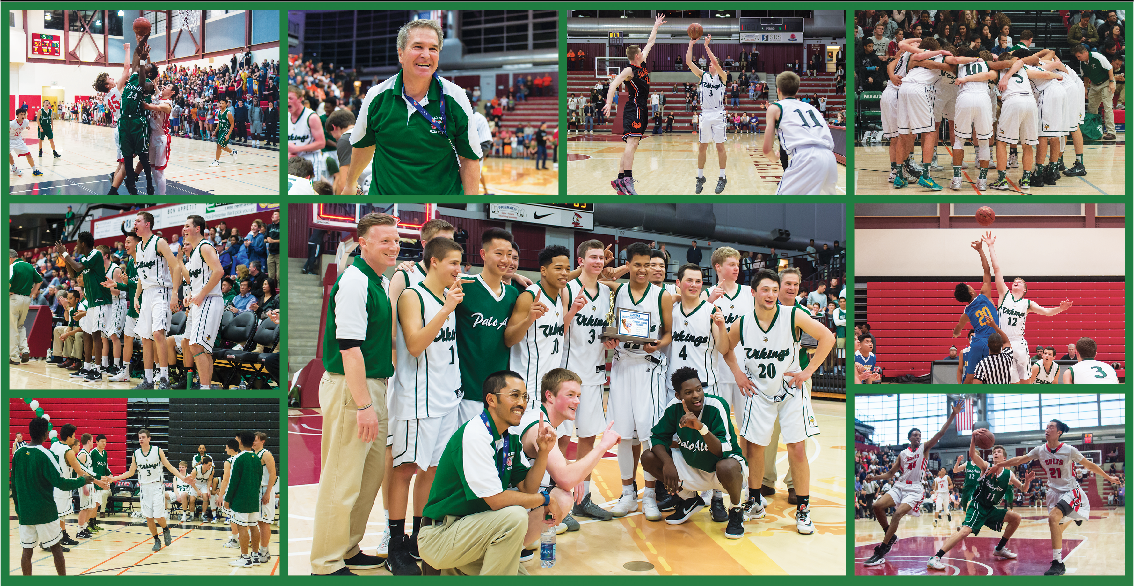 Sam Yun and Kiran Misner
Showcase
April 26, 2017
Fan Presence
There are a few games a year which all spirited Paly students feel compelled to attend. Intense rivalries with cross town nemesis Henry M. Gunn High School and league competitions against Los Gatos High School highlight the season. Chanting loudly and never losing their will to support the Vikes, the fans channel their energy toward the players. However, this year’s particularly successful run to the state regional final changed the landscape of Paly fans. Their exciting play and hunger to win thrilled students and teachers alike and as the season went on, fans not only attended the classic rivalries, but every game they could.

Some students found Paly basketball intriguing to watch due to the relationships they have with the players as well as the coach.

“I’ve known Coach [Peter] Diepenbrock since fourth or fifth grade, and I have a lot of close friends on the team,” junior Kasra Orumchian said. “I really wanted to support these guys and help them win.”

Before the season started, most of the Paly student body was not aware of the potential that the team had. However, Orumchian, a dedicated fan from the start, had high hopes and expectations for the team as well as the supporters.

“I expected this season to a pretty good one for the basketball team, and I knew that as they became more successful, there would be more attendance and a growing fan base throughout the year,” Orumchian said.

As expected, the fan attendance gained traction as the season progressed. Win after win, the Paly basketball team made it almost unbearable for fans to not attend. The inviting and fun atmosphere created by fellow fans consistently filled the bleachers by the end of the season.

“I think that the fan presence really started to grow when it was clear that the team was special,” said junior Benner Mullin. “I remember going to the first few games of the year and the bleachers were pretty empty, but by the end of the year, 50 plus kids made it all the way to support the Vikes.”

The Northern California (NorCal) State tournament only brought more fans to games to support the Vikings. Getting to the games any way they could, from school-sponsored buses to packing as many people into a car as possible, it was a guarantee that fans were going to cheer on their beloved basketball team.

Unfortunately, all great things must come to a finish and in a heartbreaking overtime loss against James Logan High School, the fans along with the players were forced to face the reality of an underdog dream being crushed at the last second. The loss was obviously an unsatisfying finish to an uplifting story about a team who believed in its goals, but Mullin cannot be more proud of the team and excited for what is to come.

“Obviously, this past season was awesome, but the team has tons of talent and experience and I can’t wait to be on the sidelines taunting the other teams next season,” Mullin said.

The Season
Coming off a subpar season with a surprise first round exit of the CCS playoffs the previous year, the team was excited to hit the court and make the Viking name heard across the league again. However, their early dominance was widely unexpected by the team, despite having set high standards from the start of the season.

“We definitely had some lofty goals but we really didn’t know how good we were going to be able to be,” Diepenbrock said.

The goals set as the season began was taken to heart by the boys, and their first glance at competitive basketball during the Burlingame tournament demonstrated that the 2016-2017 season could be special.

“The first tournament that we played was kind of an eye-opener for all of us,” Diepenbrock said. “We won our first tournament at Burlingame and beat some pretty good teams pretty convincingly and so I think that was a really big confidence boost, [telling us] wow, we can be pretty good.”

The momentum from the Burlingame tournament would only propel them further. Henceforth, the team discovered a pattern that the work they put in would give them the result they wanted and deserved.

“We just had really good energy, we came out really aggressive and we really played well [against Burlingame],” Diepenbrock said. “Throughout the season, any time we didn’t have that same energy, that same mentality as far as just going for it and just being aggressive both offensively and defensively, we struggled and didn’t play well and games did not go how we would like.

Blowing out good teams like Amador Valley High School and coming up clutch in the final minutes in the game against Campolindo High School, the Vikes looked like a force to be reckoned with.

As the regular season kicked off and the games they played became increasingly impactful in making the Central Coast Section (CCS) playoffs, their offense began to click and their defense was on lockdown. Handling their Santa Clara Valley Athletic League (SCVAL) opponents with relative ease, winning became custom and the boys cruised to a SCVAL championship with a nearly unblemished record of 10-2. Their relationships were what Diepenbrock believed made the team stand out.

“Teams that have success [just have] a natural affinity amongst the teammates,” Diepenbrock said. “[Our team] likes being with each other, they like playing together, they’re not worried about one person getting more attention than another, it’s just a very selfless group.”

Heading into the NorCal postseason, the Vikes were slated as the nine seed, a circumstance that typically entails hurdles to overcome in order to advance into the playoffs. However, Paly was well fitted to face the challenge.

“Normally being the nine seed would be a real significant blow to the team,” Diepenbrock said. “It’s probably the worst seed you can have. One seed higher and you can have a home game to start. But this team was playing basically every single game on the road for two years and we really didn’t have a significant home court so I don’t think it was that big of a deal for us.”

Future
For many, the season after a championship can matter more than the campaign that came the year before. The season after can either cement a team’s legacy as a powerhouse within the league or show that the championship season was simply a fluke. However, fans of Viking basketball can expect a bright future.

“We have seven of our ten best players returning next year and that’s invaluable,” Diepenbrock said. “These are players who have a lot of varsity experience, so the future looks good.”

The team will lose four seniors — guards Jack Simison, Eelis Copeland, Ethan Stern and Miles Tention — who were critical leaders and players in the team’s journey. Tention was named all-league MVP through his ability to control the floor and shoot from both inside and outside the key.

“Losing the seniors is going to be a big hurdle for us next year,” Zhao said.  “The juniors will have to step up as seniors played a big role, [both] starting [and] off the bench.”

Having lost four critical seniors and having to start again with new players into team, Zhao acknowledges that the next year’s season will have it’s fair share of challenges.

“Our point guard [Tention] made big plays and so with him gone, the team will need to accommodate that change,” Zhao said.

Despite this, he knows the team has battled through adversity before and can play just as well as they did this season. According to Orumchian, one of the biggest advantages the Vikings have is an abundance of returning players from this year to next year.

“I think the returning group of guys is fundamentally strong, loves to compete, and has their eyes on state,” Orumchian said. “The rotation of Bryant Jefferson and Will Schmutz into the game will be crucial for the team, and four of the five returning starters are going to only improve during the offseason.”

The future of Paly basketball will not reveal itself until the season starts again in early November of this year, but until then, we’ll just have to wait.