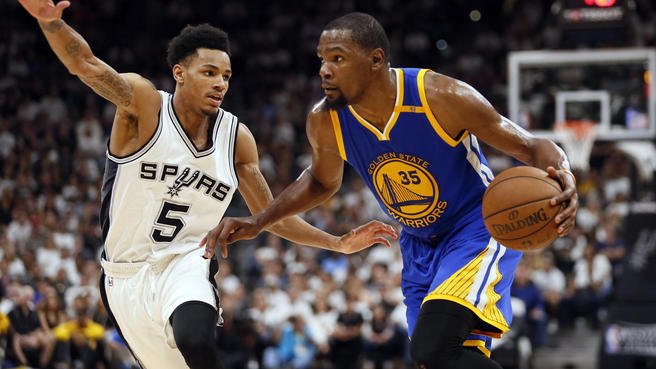 The matchup we’ve all been waiting for. The Splash brothers, fresh off their first season alongside Kevin Durant, take on the Kawhi Leonard-led Spurs. The Warriors, undefeated this postseason, will face their first real challenge against a Spurs team that blew them  out on Opening night. While the Warriors went 1-2 against the Spurs, it should be noted that the Warriors sat most of their starters for one of losses. While a 1-1 record may not inspire confidence, a closer look at the matchups shows a swing in the Warriors favor. The Warriors backcourt, both starters and bench, easily overpower the Spurs aging group of Manu Ginobili, Tony Parker and Patty Mills. Look for Stephen Curry and Klay Thompson to score early and often as they take advantage of mismatches that will no doubt be plentiful. However, it should be noted that the matchup between the two frontcourts is one that will likely support the Spurs. LaMarcus Aldridge and Kawhi Leonard will have to go against a Defensive Player of the Year contender in Draymond Green, but outside Green, the Warriors interior defense can be picked apart. Look for Leonard to stay outside and draw Green away from the post, where Aldridge will go to work against less capable defenders. Overall, thought, expect the firepower of Steph and Klay to be too much for the Spurs, who will lose the series in six games.

The Warriors take Game 1 behind a firestorm of 40 and 34 points from Stephen Curry and Kevin Durant, respectively. However, the big story of the night was Kawhi Leonard leaving the game, which resulted in a sudden and dramatic turnaround. The impact Leonard makes cannot be replaced, shown by the change in the scoreboard after his absence, shown by his +21 plus/minus rating. After he left, Stephen Curry exploded for 19 in the third quarter, and the Warriors went on an 18-0 run that led to their miraculous comeback win. With Leonard out for Game 2, look for Kevin Durant to make his mark as he takes advantage of a huge mismatch against the Spurs bench forwards.

No surprise here, as the Warriors win big as a deflated Spurs team fails to avenge the loss of Kawhi Leonard. However, it should be noted that the same lineup took out the three-seed Houston Rockets in the last round of the playoffs. The loss of Leonard, an MVP finalist, appeared to be as much mental as physical. At times, the Spurs looked lost and without drive, characteristics that have rarely been used to describe the illustrious franchise over the last decade. If any hope remains for the Spurs, it lies not in Leonard’s unlikely but possible return but in their return to home court for Game 3.

Entering Game 3, the Spurs were faced with a must-win situation, and all eyes rested upon Spurs forward LaMarcus Aldridge. Aldridge, unfortunately, chose a bad time to have an off night, with a -27 +/- rating when he was on the court. Even without Aldridge, the Spurs managed to stay in the game until the third quarter, when Warriors forward Kevin Durant scored 19 of his 33 points. Durant’s red-hot night broke the game open, pushing the Warriors lead safely into double digits and securing a 3-0 lead. For reference, no team has ever come back from a 3-0 deficit in the NBA. However, it should be noted that no team had ever come back from a 3-1 deficit in the NBA Finals until the Cleveland Cavaliers did so last year to shock this same Warriors team. Warriors fans hope that history will not repeat itself.

The Spurs had to do the impossible: come back from a 3-0 deficit. While the Warriors blew a 3-1 lead in the Finals last year, the team had no intentions of doing so again, and finished off the Spurs in a four-game sweep. The Warriors were in complete control for the vast majority of this game, and it was, like the majority of these playoffs, a snoozer. All that remains for the Warriors is reclaiming the title that eluded them last season against whichever of the two teams comes out of the East. MOst basketball fans hope it will the Cavaliers, a matchup that would feature LeBron James and Kyrie Irving against Kevin Durant and the Splash Brothers.