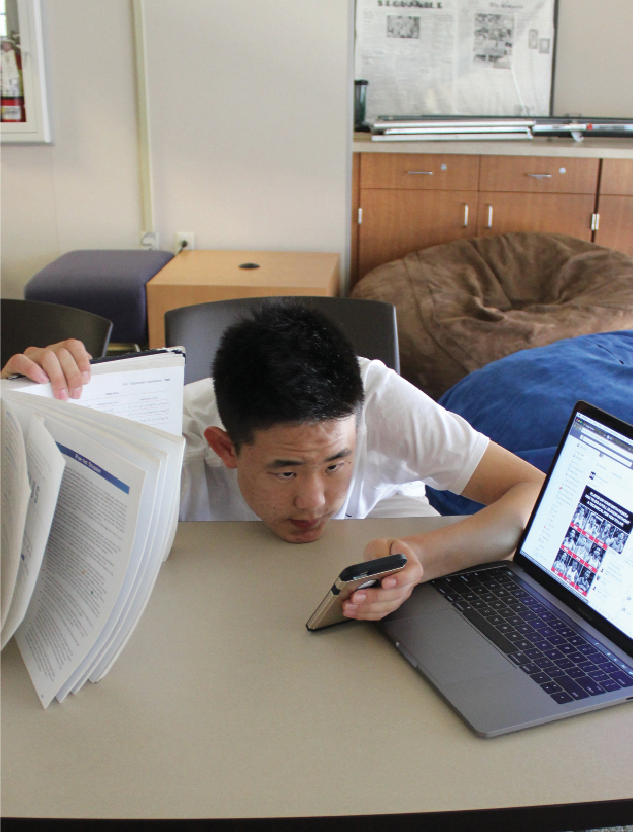 It’s that time of year again. The sun stays out longer, as do the majority of teenagers. Weather forecasts creep towards 80 degrees, replacing the plateau of 60s of the past few months. Pastel shorts have replaced khakis and jeans, and sleeves grow shorter and shorter.

During this time, the seniors enjoy their well-deserved semester of slacking, as the figurative kings of the school. However, unbeknownst to the majority of the Paly population, a similar phenomenon of apathy has swept over the class of 2018: Second Semester Junior, or #SSJ.

Just several months removed from starting their early college applications, one can easily identify an #SSJ by recognizing these traits.

This is possibly the easiest way to spot an #SSJ, who are notoriously plagued by lack of sleep. Going through the hardest year of high school, an #SSJ often sleeps the same amount of hours as their GPA. Causes of sleep circles may include, but are not limited to: Advanced Placement (AP) tests, Physics Honors exams, or cramming for the SAT Subject Tests that they completely forgot about. This often comes with the unexpected side effect of consistent whining about being tired.

Eager to show off their brand-new licenses, #SSJs can often be seen either driving haphazardly on Embarcadero and Alma or parking in the Southgate  neighborhood due to their lack of a parking permit. You can generally attribute it to: the aforementioned lack of sleep, focusing on the handling the AUX cord music or arguing with a friend illegally placed in the passenger seat.

An #SSJ will generally have a green circle next to their names on Facebook, signaling an active user. Unfortunately for them, a higher workload directly coincides with a larger amount of procrastination. You can easily identify this by looking out for the following symptoms: starting homework past midnight, excessive tagging of friends and posting in Paly Memes for the Dank Youth Facebook group.

Having completed nearly three years of Paly, the majority of #SSJs have figured out, or have decided, that attendance is simply not as important as admin makes it out to be. Consistent tardiness can easily be detected with a quick glance at the attendance tab of Infinite Campus. An #SSJ will have a calendar similar to a rainbow, dotted with oranges (tardies), reds (cuts) and greens (for when parents do their kids a favor the period of a test).

Upon checking the History tab of Google Chrome, one will see a combination of Schoology, Facebook, Google Drive, Buzzfeed and YouTube. Oftentimes, timestamps will be one minute apart, signalling a quick change in attention. A normal #SSJ will have tabs crowding the top bar of their browser, ranging anywhere from five to 20 (when there is a test the next day).