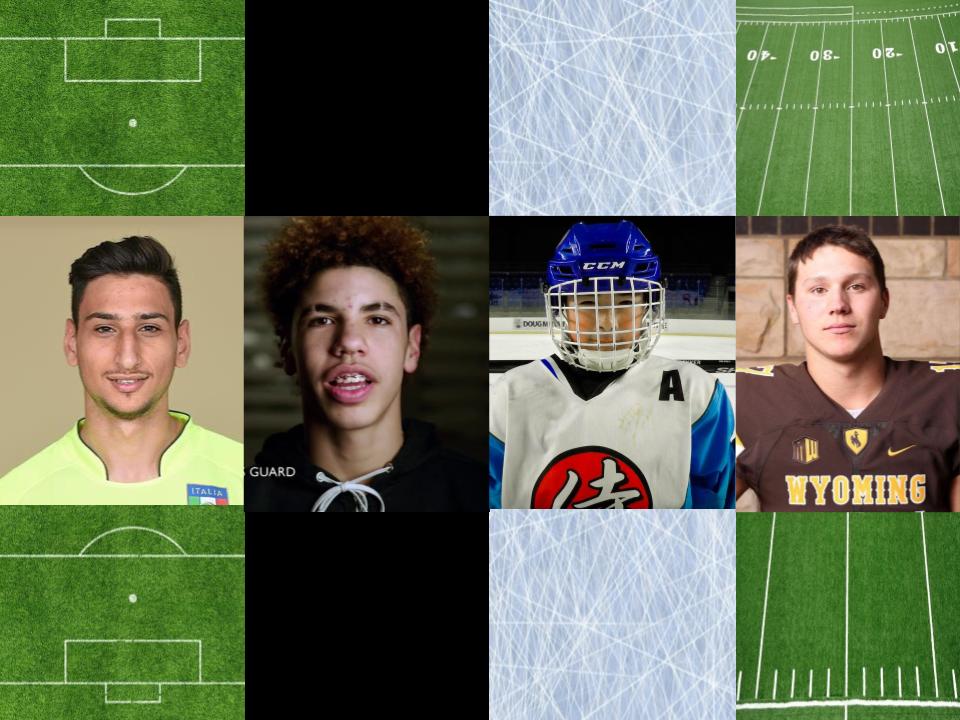 Standing at 6 feet 5 inches, weighing just shy of 200 pounds and sporting a full-grown beard, Gigi Donnarumma fits in perfectly with the rest of his coworkers as he hits the pitch for practice. He is one of the biggest players on the team, and his confidence in practice does not connote anything unusual about Donnarumma. However, something is very special about the goalkeeper: he’s 18 years old and starting for one of the Europe’s elite professional football clubs, AC Milan.

Donnarumma was first brought into the international limelight when AC Milan manager Sinisa Mihajlovic replaced the struggling Diego Lopez and made Donnarumma the youngest goalkeeper to ever start a Serie A match. Unbeknownst to even the die-hard fans of the Italian club, Donnarumma was a shocking choice for Mihajlovic to make. After all, the teenager was not fully grown and neither emotionally nor physically ready to play in a top-tiered league of Europe. Nevertheless, the goalkeeper took charge of his job that day, only conceding one goal in a win against league title contenders Sassuolo. Despite his solid performance between the posts that day, fans were still unsure that the 16-year-old could handle the goalkeeping duties for the club.

Fast forward a year and a half to the present, and Donnarumma is being considered one of the surprises of the year and has solidified his spot as Milan’s top shot-stopper. His play has excited fans and last-minute saves against rival Juventus and league competitors Torino have kept an otherwise average Milan team in sixth place in Serie A. Unsurprisingly, the fans were not the only one’s who took notice of his outstanding goalkeeping during the season. Just before his 18th birthday, Donnarumma was given the present of a lifetime: a starting role in Italy’s friendly against France.

With a starting spot secured at AC Milan and moving up the ranks within the Italian national team, Donnarumma certainly has the potential to become one of the best goalkeepers to ever play the game. As legendary goalkeepers such as Gianluigi Buffon and Iker Casillas make their way out of football, Donnarumma is a promising talent that fans should see as a plausible replacement for the likes of Buffon and Casillas.

When word got around that high school basketball player Lamelo Ball from Chino Hills, Calif. scored an unbelievable 92 points in a single game, people across the nation had words of either praise or disgust for the young man. Sports journalists from various publications including the Los Angeles Times called Ball a “cherry picker,” and former National Basketball Association (NBA) player Charles Barkley said that he “[has] a serious problem” with Ball’s lack of effort on defense. In contrast, others enjoyed Ball’s offense-only performance, with NBA superstar Stephen Curry applauding his showy exhibition.

Hate him for his lack of defense or love him for his offensive prowess, it is hard to disagree with the fact that Ball can actually “ball out.” Ball’s play has earned him the title of the nation’s 16th best player in the Class of 2019 per ESPN. In 33 games played for Chino Hills High School, Ball has averaged an outstanding 21.5 points per game, while also filling up the stat sheet with above average numbers in assists and rebounds.  These stats caused college scouts and coaches to recruit Ball at a very young age. As a freshman in high school, Ball already made a statement saying that he had committed to the University of California, Los Angeles (UCLA).

Even though Ball has already put his future in the hands of the UCLA coaching staff, his commitment to the Bruins has not stopped his dominance. His offensive game is as polished, if not more, as any person playing high school. Shooting-wise, he is a top three shooting guard and is destined to improve.

While Ball is a promising young talent, controversy surrounds his family. His father, LaVar Ball, is currently considered the most tendentious man in the sports after multiple hotly-debated comments, having said that “all of [his] sons are going to be one-and-dones in college” and that he could “beat Michael Jordan one-on-one.” Furthermore, the Ball family, made up of Lamelo, fellow UCLA commit LiAngelo and NBA lottery draft prospect Lonzo, have their own brand, dubbed the Big Baller Brand (BBB). Much like the rest of the Ball family, BBB is also very controversial. Their recently released Zo2 basketball shoes were priced at $495 for the public, to raise a slitted eyebrow and bringing more disapproval to the family. As LaMelo continues to mature and become a better basketball player, he must watch his public image if he wants to be the best that sports has to offer.

Googling “Aito Iguchi” will lead you into an unknown world of what one can do on the ice. Spins, turns and seamless jukes are all a part of Iguchi’s game as he smoothly glides across the ice. First garnering attention through YouTube videos displaying his skills, Iguchi has quickly become one of the best young players in international hockey.

Hailing from Saitama, Japan, Iguchi started playing the game at the age of five and has not looked back. Working off of the skills of National Hockey League (NHL) players, Iguchi learned the moves of the superstars he saw on television and replicated them on the ice in his free time. His stick handling and ability to deke even the toughest of defenders made him an Internet sensation.

Due to his young age, Iguchi’s biggest problem will most likely be his risk of “burning out,” a common psychological condition that causes many sports prodigies to lose motivation for a sport either because the sport has consumed their life at a young age. Unfortunately, examples of burnout in athletic prodigies are plentiful. One such example is soccer player Freddy Adu, who started his professional career at the age of 14 and never amounted to his potential due to burnout. However, Iguchi’s head coach Brandon Barber believes that his love for the game and desire to become better will help to prevent this.

“There’s an old saying in Japan that the nail that sticks out gets knocked down,” Barber said in a video about Iguchi. “He is not getting knocked down. He’s out there having fun, doing all the things we’re told you shouldn’t be doing [at this age].”

The level of hockey in Japan does not compare to that of the U.S. and Canada and for this reason, Iguchi decided to take a leap of faith and move to Canada to train with Barber. The move has definitely made him a better player; however, it has been a challenge adjusting to a new culture.

“Him moving away from home at eleven years old to pursue this is; it’s insane to me,” Barber said. “The average kid is doing school, they have no job or work. But [Iguchi], he’s taking on a whole lot and he’s doing it with a smile on his face.”

For now, Iguchi won’t have to worry about his professional career because entering the NHL draft is still four years away, as the NHL age requirement is 18. Instead, the next few years will be dedicated to refining his skills and becoming as good as he can. Four years may seem a world away, but soon enough, Iguchi could become a household name as one of NHL’s finest.

Wyoming isn’t known for much. It is one of the only states that boasts more cattle than people and currently has more people leaving the state than entering it. However, it does have one thing to brag about: nestled in the state’s only four-year university, University of Wyoming, lies one of American football’s brightest prospects, Josh Allen.

Allen is the star player of the Wyoming football team and unsurprisingly, his statistics back up his fame. In 2016, Allen’s sophomore year and first year starting for the Cowboys, the California native threw for a spectacular 3,203 yards. Along with his impressive yardage, the soft-spoken quarterback found his receivers for 28 touchdowns throughout the year, while only throwing 15 interceptions. The year was obviously monumental for him, but according to scouts, it is only the start of what could be a hall of fame career.

Allen only had two Football Bowl Subdivision (FBS) schools offering him a scholarship to play football at their school: Wyoming and Eastern Michigan University. Allen played better and better as his college career progressed and when scouts started to notice, he couldn’t stop thinking about the draft. As a returning junior, Allen had all the choice in the world to leave his Wyoming education and go straight to the National Football League (NFL) draft. But, as he pondered his decision, Allen realized that coming back to a program that had shaped him as a player as well as a person was the decision that best fit his life. The next year at Wyoming will certainly be telling about his future as a football player, as fans and coaches alike will see if Allen keeps developing into the player they hope he can be

Allen’s biggest weakness is that he does not compete in the highest conference of college football. Wyoming currently competes in the Mountain West conference of the FBS. By virtue of being in this league, the team does not face as many top competitors as a team in the Southeastern Conference would, because it doesn’t have many highly ranked teams. Due to this, NFL teams may overlook Allen, citing his success as a result of the easy opponents Wyoming faces.

Despite critics, Allen has many strengths that could allow him to be one of the best football has ever seen. His strong footwork, arm strength and accurate passing are all qualities that have to be perfected to translate to the NFL, and Allen has already shown his mastery in these areas. Furthermore, he’s an athletic talent who can operate almost any type of offense, whether it be under center or from the shotgun. Undoubtedly, there is still much unknown surrounding Allen, but if he continues at the pace he has over the past few years, Allen may be able to put his name amongst the greats.