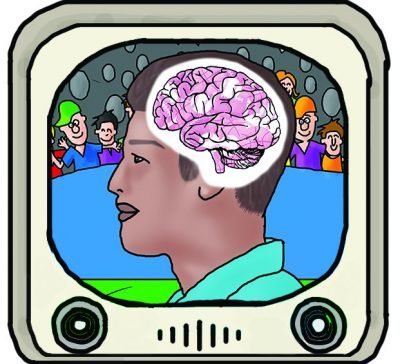 The psychology behind sports fans

If you’re reading this, chances are you identify as some kind of sports enthusiast. In fact, in a study conducted in 2015, 60 percent  of American people identified as a sports fan, according to Gallup.com. For many, the source of their devotion to a certain team varies — perhaps from family influence —following an individual player or a team’s location. Whatever the case, many fail to consider how much of their own support stems from various psychological motivations.

Last year, an estimated 5 million people  marched through Chicago to celebrate the Chicago Cubs’  World Series Championship victory, marking it the seventh-largest human gathering ever recorded. While remarkable, the event was just one of many historic displays of fans taking extreme measures to express their support. But what exactly is it that drives people to make these sacrifices? According to research conducted worldwide, the answer lies behind psychological concepts of self-esteem, belonging and embracing larger and arbitrary ideologies.

It is a well-established concept that an individual’s self-esteem is raised when associating themselves with others who are successful. Research conducted by Robert Cialdini, the Regents’ Professor Emeritus of Psychology and Marketing at Arizona State University, expressed this sports phenomenon by concluding that a fan’s likelihood of wearing sports-related apparel after a team’s victory was greater than following a loss.

New fans are also more likely to speak in first-person to express victories, such as saying “our defense played well,” whereas they usually use the third-person in poor performances, like “they looked terrible out there.”

This innate impetus to increase our self-worth pushes people to look for broader connections. This idea is prevalent not only in the teams we identify with, but also concepts such as unification and nationalism. For example, in the U.S. Women’s National Soccer Team’s conquest to their World Cup Victory in 2013, chants of “U-S-A” were heard across the stands in each match, and those who never supported the team previously began spectating matches and taking part in their celebrations.

This pursuit of self-worth through sports extends deeper into the idea of people’s sense of belonging within different groups. The concept of social connection is an inborn desire for all humans, and is primarily established through interactions.

In many ways, sports serves as a system for people to find these bonds in daily life.

In the Bay Area, for example, Golden State Warriors fans who are wearing supportive gear can find an instant sense of connection with the other, and this sense of acceptance only becomes stronger as more people become involved. Research by William J. Mcguire, a social cognitive psychologist, reinforced the matter, as subjects in his children’s identities studies demonstrated identifying better with members of their own gender in families outnumbered by children of other genders. Therefore, congregating in sports venues where crowds of like-minded fans are present brings the greatest sense of connectedness, which may explain why tens of thousands of people attend all types of games on a daily basis.

Even after identifying the meaning behind these tendencies, pondering the idea of which team an individual chooses to support exposes how arbitrary the process is. People who follow a certain team do not come to the decision after an extensive and comprehensive selection process. Rather, it can be from something as arbitrary as where someone was born, and is strong enough to lead to a lifelong following and extend to a plethora of other seemingly -strange mannerisms.

For example, fans still heavily debate the fairness of a call during what is known as the “Tuck Rule Game,” taking place in a 2001 Divisional Playoff game between the Oakland Raiders and New England Patriots. After trailing 13-10 with two minutes remaining, Patriots quarterback Tom Brady was hit in the backfield and dropped the football. The referees initially called it a fumble, but later reversed the call due to his arm’s forward motion, despite Brady starting to tuck it into his chest, determining it was an incomplete pass.

The Patriots maintained possession scored on the same drive, allowing them to continue their playoff run and eventually win this year’s Super Bowl. Had it not been for the call, the Raiders would have likely won the game. To make matters worse, the “Tuck Rule” was repealed two years later. Raiders fans continue to remember the game, which has led to numerous acts of violence and arguments between both parties. These types of incidents display the ability of sports to evoke anger and strong emotion from fans, all for a game they do not play and players they will never know.

For something often due to chance, the degree of dedication from a fan to their respective team is astonishing.

Similar ideologies are relevant in more substantial ways based on characteristics, such as where someone grew up. For example, someone born in U.S. who adopts Catholicism and capitalistic policies likely will not realize how many of these decisions were shaped by their lives in America. Had they lived in another country in their early childhood, their idea of what beliefs were the best would almost certainly be different.

Regardless of which individual teams and players someone may follow, the concept of sports remains as a remarkable yet random way to fulfill three basic human needs. Having a sense of belonging, a strong self-esteem and significant relationships that represent larger parts of life are important for anyone to contain. For this reason, a variety of sports and their loving fans will remain a large part of culture worldwide for many more lifetimes.