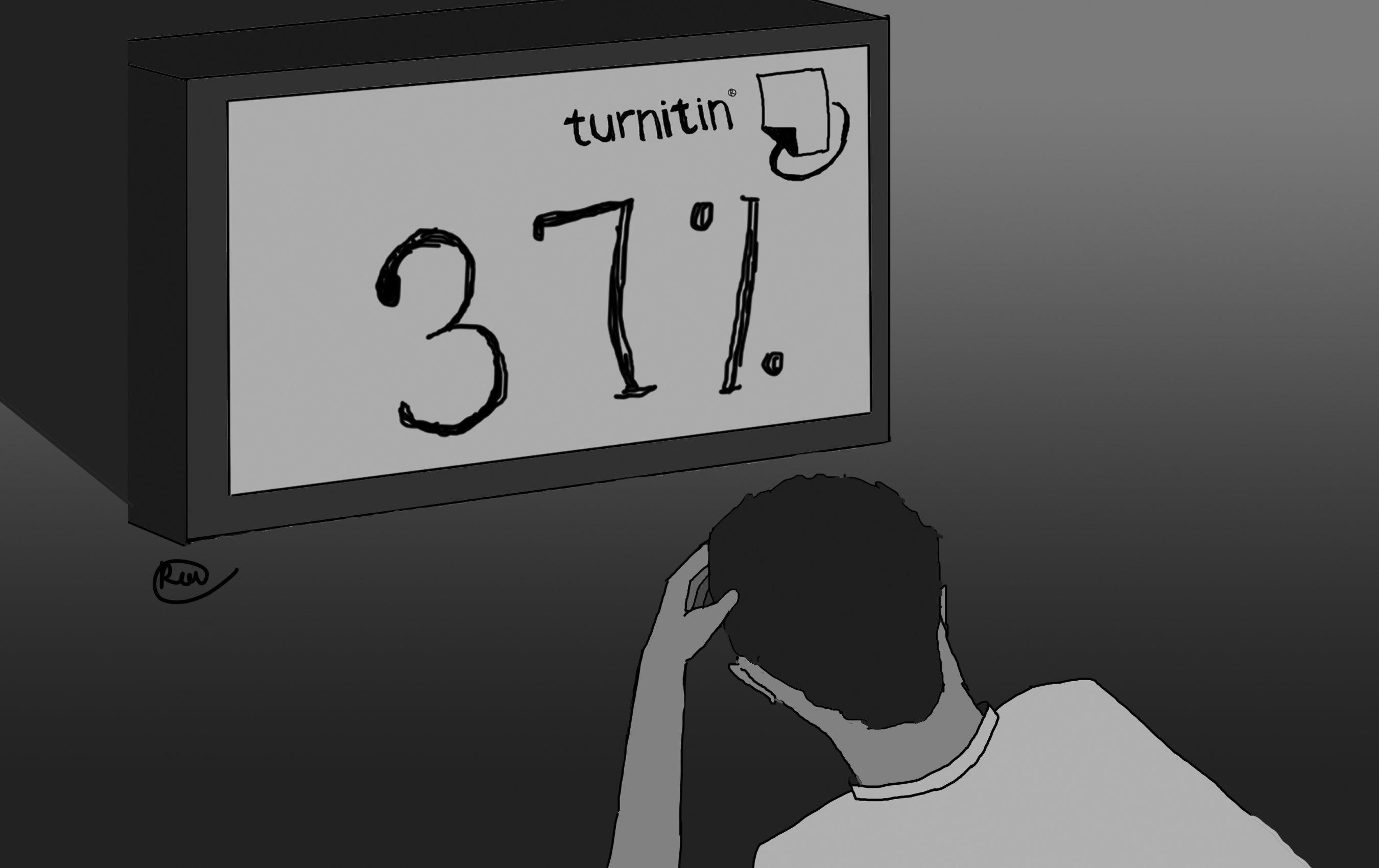 Turnitin should not be used as sole plagiarism detector

In such a competitive academic environment like Palo Alto, it is inevitable that students will look for ways to cut corners in the academic process, whether it be through plagiarism, or other forms of academic dishonesty. There seems to be no crime greater than cheating, especially in our educational climate. Thus, many teachers utilize Turnitin.com, a website created to stop plagiarism by comparing student work to material available on the internet.

The design of the website is simple: students turn in their work through a third-party website that examines the content for material that has been previously published on the internet, therefore cracking down on plagiarism in academia.

Naturally, there will be a small percentage of similarity in students’ original work; problems only arise when similarity percentages (the amount of work of which Turnitin has found elsewhere on the internet) reach over 20 percent. This high similarity rate can sometimes be due to quotes from the text that students are referencing. However, after this threshold, students’ work are questioned and their grades are at stake.

Students’ grades can be massively depleted if teachers base their grading system on the similarity percentage given by Turnitin.

It is entirely possible for students to have similar ideas to content on the internet, even if they came up with them entirely on their own. When hundreds of students are required to write essays on the same book each year, it is highly probable that there will be similarities in essays, as well as ideas from external websites that analyze books, including Sparknotes, Shmoop, CliffsNotes and eNotes.

Furthermore, similar ideas are also found on general answer sites such as Yahoo Answers, Ask and Quora, and may make students appear to have plagiarized without their knowledge. All of these websites may have similar ideas that can be shared with a student’s own, original work.

In addition to these similar ideas, no matter how original one tries to be, there is a finite amount of ways in which a sentence can be organized and rephrased without being repeated by someone else on the internet.

Students’ grades can be massively depleted if teachers base their grading system on the similarity percentage given by Turnitin. If a highschool student fails a class because of plagiarism based on Turnitin, the student not only suffers a lower grade point average, but also falls subject to a mark on his or her transcript, which could heavily interfere with their chances of being accepted into particular universities.

If Turnitin were to mistakenly accuse a student of plagiarism, the student’s entire academic career would be jeopardized.

The consequences for plagiarism in college are far more severe. While some universities fail students who are accused of plagiarism, others go as far as expelling students for copying someone else’s work, a seemingly innocent task.

According to Turnitin, the website is used by 6,000 institutions in 90 countries, including Harvard University and Georgetown University.When universities rely solely on Turnitin for detecting plagiarism, there are bound to be inaccuracies in differentiating between substantial acts of academic dishonesty and those that are untrue.

Turnitin is first and foremost a for-profit business. It charges fees for its services and archives the work that is turned in. Therefore, it becomes susceptible to bias if the company, for instance, were to be bribed.

The company also archives student work for future reference, violating the rights of students to be in control of their own intellectual property, and profiting — at least partially — from students’ work.

Though this widely-used cheatingdetector may serve its purpose to a certain extent, it should in no way be a teacher’s sole use of measuring academic dishonesty. There are several lesser-known plagiarism scanning websites that are far less problematic than Turnitin. Unplag, for example, does not archive students’ work but still checks for independently-created work.

Yet, even Unplag as well as other plagiarism checking websites are not without their faults. The website is also a for-profit business like Turnitin, and charges a fee to be used. Since the website is used less often, it can face the possibility of being less accurate that Turnitin (an organization that has been in existence since 1998.)

Though this widely used cheating-detector may serve its purpose to a certain extent, it should in no way be a teacher’s sole use of measuring academic dishonesty.

Though Turnitin may help students and teachers to a certain extent, there is no plagiarism-detector that will be perfect. The only way for educators to ensure the uniqueness of a student’s writing is to communicate with their students as well as use their most accurate judgement before dismissing and distrusting a student and their work that is given a high similarity percentage by Turnitin.