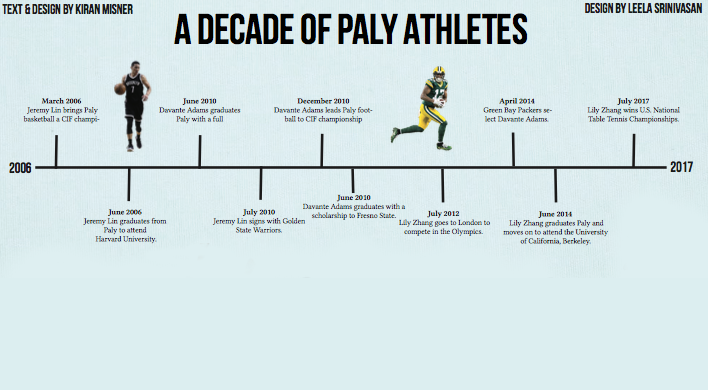 A Decade of Paly Athletes

During the winter of 2016-17, Palo Alto High School’s basketball team had a season that would be remembered for the ages. Filled with last minute victories, exciting plays and a California Central Section (CCS) championship to top it all off, the team gave students and fellow supporters something to be hyped about every time they stepped on the court.

While many Paly students may see such a good athletic team as a novelty, it was just a few years ago that a point guard from Paly gave Viking basketball arguably its best season.

Since he didn’t get any collegiate offers, one would assume Jeremy Lin was a good, but not great, high school basketball player. However, the stats and Paly’s run to the state championship show otherwise. Averaging 15.1 points, 7.1 assists, 6.2 rebounds and 5.0 steals, Lin led Paly to an impressive 32-1 season and a California Interscholastic Federation (CIF) Division II state championship.

The road to the championship wasn’t a lucky draw, either. Paly had to beat nationally-ranked and consistent powerhouse Mater Dei High School in the final. The cherry on top: Lin was named a finalist to 2006 Mr. Basketball State Player of the year, alongside current NBA colleagues James Harden and Ryan Anderson.

And still, colleges slept on him. No National Collegiate Athletic Association (NCAA) Division I school offered Lin a scholarship.

However, Lin’s outstanding academic record helped him get recruited at Harvard University. Impressive stats at Harvard brought some National Basketball Association (NBA) scouts to see him, but like college scouts, they slept on him.

Lin went undrafted at the 2010 NBA draft and was eventually picked up by the Golden State Warriors. His unrelenting work ethic impressed, but Golden State still didn’t think Lin was a good fit for the team, so they dropped him. As the Warriors took him off the roster, the New York Knicks picked him up in free agency.

And here was the beginning of an underdog story that not only Palo Altans, but also people everywhere recognize as one of sport’s most heartwarming stories. ‘Linsanity,’ as it was called, was the name for Jeremy Lin’s rise to stardom in 2012, as he made headline plays such as hitting a game-winner against the Toronto Raptors and scoring 38 points in an electrifying game against the Los Angeles Lakers.

The New York Knicks, despite having a subpar season, were rejuvenated by Lin’s play and even ended up making the playoffs that year.  Lin’s story took over the NBA, and with it, put Palo Alto in the spotlight.

Linsanity and Lin’s solid play for the rest of the year got him a contract with the Houston Rockets. Sadly, Lin’s career has been set back by a number of injuries, and his stint in Houston has been followed by short moves to the Los Angeles Lakers,  the Charlotte Hornets and the Brooklyn Nets. In following seasons, fans across the league hope he can return to the same glory and success that he had as a Viking and as a Knick.

In a tough season full of battles, the football team could taste victory. Its dream, the CCS Championship, would either be accomplished or failed within the next few plays. So, with the game on the line and less than a minute left, the Vikings knew that there was only player they should give the ball to.

He scoured the field for a receiver to throw to, but the whole crowd knew where the ball was going. From the 30-yard line, Bono threw a long arcing spiral to the back of the end zone. The crowd’s eyes followed the ball as it dropped into the receiver’s hands. “Touchdown, Davante Adams,” the commentator said, barely audible over the crowd’s deafening voice.

Adams’ touchdown would not only be the game-winner for the 2010 CCS Championship, but woud also spark a State Division 1 Championship run, where the team would be crowned champions against Centennial High School.

Fast forward through an outstanding career as a Fresno State Bulldog, where he averaged 19.0 touchdowns a year. With the 53rd pick in the NFL draft, the Green Bay Packers selected Adams. Hoping to bolster their offense and give stud quarterback Aaron Rodgers another offensive weapon, Adams has flourished under his first few seasons as a Packer.

This season, Adams looks to raise his game to greater heights than last season. In the 2016-17 campaign, Adams totaled 12 touchdowns and 997 yards.

In fact, Adams is the only receiver in NFL history to catch 12 or more touchdowns without reaching 1,000 yards on the season, emphasizing that Adams is one of the best scoring wide receivers in the NFL.

Even when Adams is producing on the field in Green Bay, he still recognizes the importance of giving back to the community where his football career started. In the summer of 2016, Adams returned to Palo Alto High School to hold a football camp.

According to former Henry M. Gunn High School football player Hudson Alexander, the experience was something that he’ll cherish for a long time.

“It’s just a great opportunity to be around him and the whole camp was a success,” Alexander said in an interview with the Mercury Times. “It was great that we got to win a championship, too. That was my favorite part.”

Adams’ goal at the camp wasn’t just to teach them about how to become better as a football player, but also to teach responsibility and maturity.

“In the huddle, we were talking, and they were teaching us how to be men, be responsible, take care of business,” said DJ Barnes, a member of the camp.

For diehard Vikings fans, Adams’ catch in the corner of the endzone will be a moment we’ll forever remember and his rise to the NFL has further cemented his spot in the Viking Hall of Fame.

While ping pong can be a game shared between friends as a cherished pastime, a game to escape daily life or even part of the intense focus of Paly’s Associated Student Body ping pong tournament, for Lily Zhang, table tennis is passion and career.

Zhang’s father immigrated to the United States from China and brought along with him his passion for table tennis. This passion was instilled in his daughter, who started to play with the Palo Alto Table Tennis Club at age seven.

A fast learner, Zhang picked up the game and improved under the tutelage of coach Dennis Davis. She quickly rose up the youth table tennis ranks, making the United States Cadet Team at age 12.

A year later, Zhang made history by becoming the youngest player ever to be selected by the U.S. Women’s team and was ranked number two in the Women’s Junior Table Tennis rankings. In 2012, Zhang would face her biggest test yet. Known as the mecca of sports, the Olympic Games is an elite meeting spot for athletes of all kind, from soccer to swimming to javelin to table tennis.

Zhang’s trip to the London Olympics had not been easy; she barely qualified for the United States team, taking the third and last spot after winning a crucial match against Canadian Anqi Luo in the North American Olympic Trials.

Unfortunately, Zhang’s trip to London was cut short by a loss in the first round against Croatian Cornelia Molnar. No, she didn’t win gold, but making the Olympics was a testament her hard work and dedication.

Persevering like the Viking she was, Zhang returned to the Olympics just a few years later; this time with a vengeance. Taking a gap year in 2015, Zhang set her goals on the Rio Olympics in 2016, specifically on improving from her last experience.

Zhang came to play, winning her first match easily by a score of zero. While the second match came fatigue, Zhang was again able to pull out a win. Sadly, Zhang’s inexperience led to a third round loss, but she had finished as Team USA’s best competitor at the Olympics, a certain improvement from London 2012.

Throughout high school, Zhang continued perfecting the art of table tennis while being just as active in school: she was a staff writer for The Campanile and maintained good grades throughout.

Zhang currently attends University of California, Berkeley and hopes to major in psychology. She said her life as both a table tennis player and a student can be a lesson for people of younger ages.

“This shows juniors and kids that they don’t have to give up their passion,” Zhang said in an interview with SB Nation’s ‘California Golden Blogs’. “They can do both.”

Zhang is currently training for the 2020 Olympics and holds the title of U.S Women’s National Champion in table tennis.