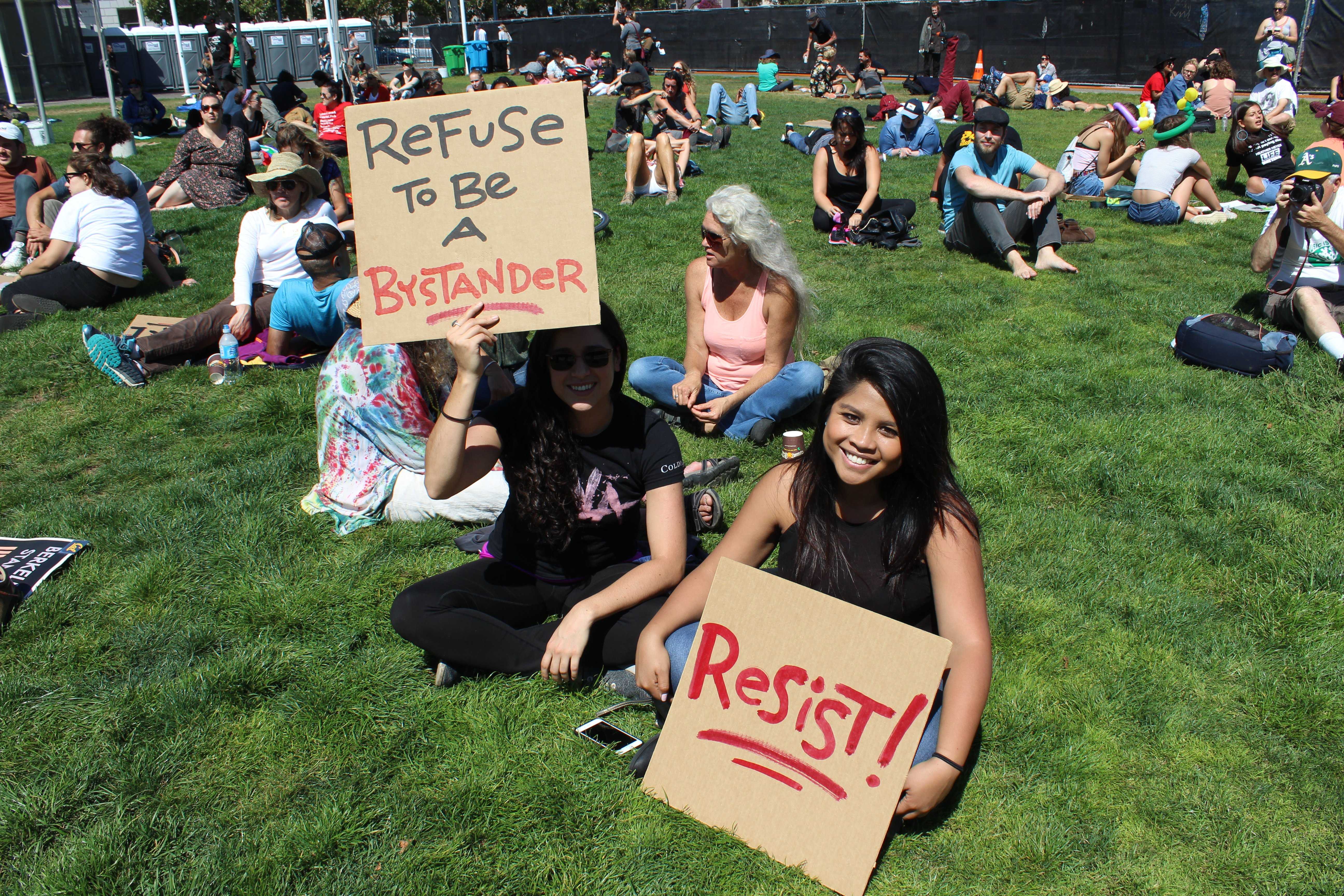 Citizens rally in San Francisco in opposition to alt-right

Protesters throughout the Bay Area assembled on Aug. 26 for the Peace, Love and Understanding rally, held at the Civic Center in San Francisco.

Originally, a moderate conservative group known as Patriot Prayer had organized a protest in Crissy Field. However, in light of the recent events in Charlottesville, Va. in which an anti-white supremacist protest left protester Heather D. Heyer dead, the group decided to host a press conference instead to avoid potential violence.

“Over what’s transpired over the last week, we couldn’t ensure the safety of all of the attendees,” said protest organizer Gabriel Silva in a Facebook livestream.

Silva added that he felt a propagation of fear from Mayor Ed Lee and California Rep. Nancy Pelosi.

“I think [Lee and Pelosi] just really called a lot of the extremists to come out [and exercise their right to freedom of speech] and we weren’t given the proper security measures to be able to control who comes to it and who doesn’t.”

“Intermingling of protesters [against the rally] and rally-goers would be a horrible, horrible idea. It would lead to nothing but casualties and possibly death. We’re doing the right thing right now. We’re stepping up the plate.”

Though Patriot Prayer does not identify as a white supremacist group or an alt-right group, it has gained support from organizations such as the Oath Keepers — a non-partisan association of current and formerly serving military and police — and first responders, whose mission is to “defend the Constitution against all enemies, foreign and domestic.” Associations with such groups have lead people to label Patriot Prayer as a white supremacist group.

“Patriot prayer is about going into these areas where people are too afraid to speak out and speak up,” said group leader Joey Gibson, adding that Patriot Prayer was not a hate group.

In response to the press conference held in Alamo Square, people assembled throughout different neighborhoods in San Francisco to protest the conservative group.

“The overwhelming displays of racism and hatred across the country has only really been allowed to exist because of people being silent for so long,” said protest attendee Queenie Olalo. “I think that it’s really important that if we don’t want this to continue and we don’t want this to be the new normal, that we stand up and we come, we show up and we support each other.”

Amid the various rallies against Patriot Prayer in San Francisco, a large group assembled on Castro Street to listen to different community leaders speak. Sam Modest, a teacher from San Francisco, attended to set an example for his students.

Though some locals celebrated that the Patriot Prayer rally was cancelled, Modest does not see this as something to be celebrated.

“Personally, I see it as a strategic move and not necessarily a pure victory on our side which I think some people are saying,” Modest said. “To me, it seems like a strategic move to try to have their rally without as much disruption, but also potentially create a rally that could result in more violence. . . so I saw it as a pretty irresponsible decision.”

Similar to Modest’s opinions, many attendees felt that they had a responsibility to attend.

Though a rally in San Francisco was cancelled, a rally in Berkeley, Calif. held on Sunday resulted in violence and left Gibson in the hospital after being hit repeatedly in the head and ribs by members of Antifa and pepper sprayed five times. In response to news, Gibson’s hospitalization, Silva made a livestream on Facebook.

“[This is] not what our movement needs,” Silva said. “We told everybody not to go to Berkeley today.”

Gibson personally views members of Antifa as a terrorist group.

“[Members of Antifa]  are fueled by hate and justify using violence. Why would anyone support or be silent about these groups?” Gibson said in an instant message.

Paly students have taken notice of the violence of the rallies stemming from both left and right-wing protesters.

“I think that rallies are a form of peaceful protests, yet they’re becoming very violent.” Azalea Wakelee

Senior Jihi Kundu shared similar thoughts on the rally and fatality that occurred in Charlottesville, Va..

“I think that it is good to stand up for your beliefs but I did not think[the alt-right’s] reason was good at all,” Kundu said.“It was very obscene and felt very greedy.”

The Paly community has had different found different methods to approaching controversial topics in class. History teacher Eric Bloom believes it is important to discuss current events and works on teaching his students to look at sources objectively.

“What I focus on with my students is getting them to see is that you can objectively look at sources of news and say ‘these are factually based, these have this leaning and they really do fill a spectrum,” Bloom said. “There’s value in looking at Breitbart, so that you can understand what that mindset is, but that’s not gonna give you a very realistic view of what’s going on, and so the idea is that you need to look at balanced views from the left and the right and see where they overlap and then you’re getting towards the real factual truth.”

On the other hand, English teacher Kindel Launer does not incorporate the news into her classroom as frequently as Bloom for fear of how it will impact her students.

“I’m very hesitant because sometimes students think that just because a teacher speaks to a conservative position or a progressive position, that they’re trying to push their politics on students,” Launer said.

The rallies have stemmed conversation that will continue outside of the classroom and within.