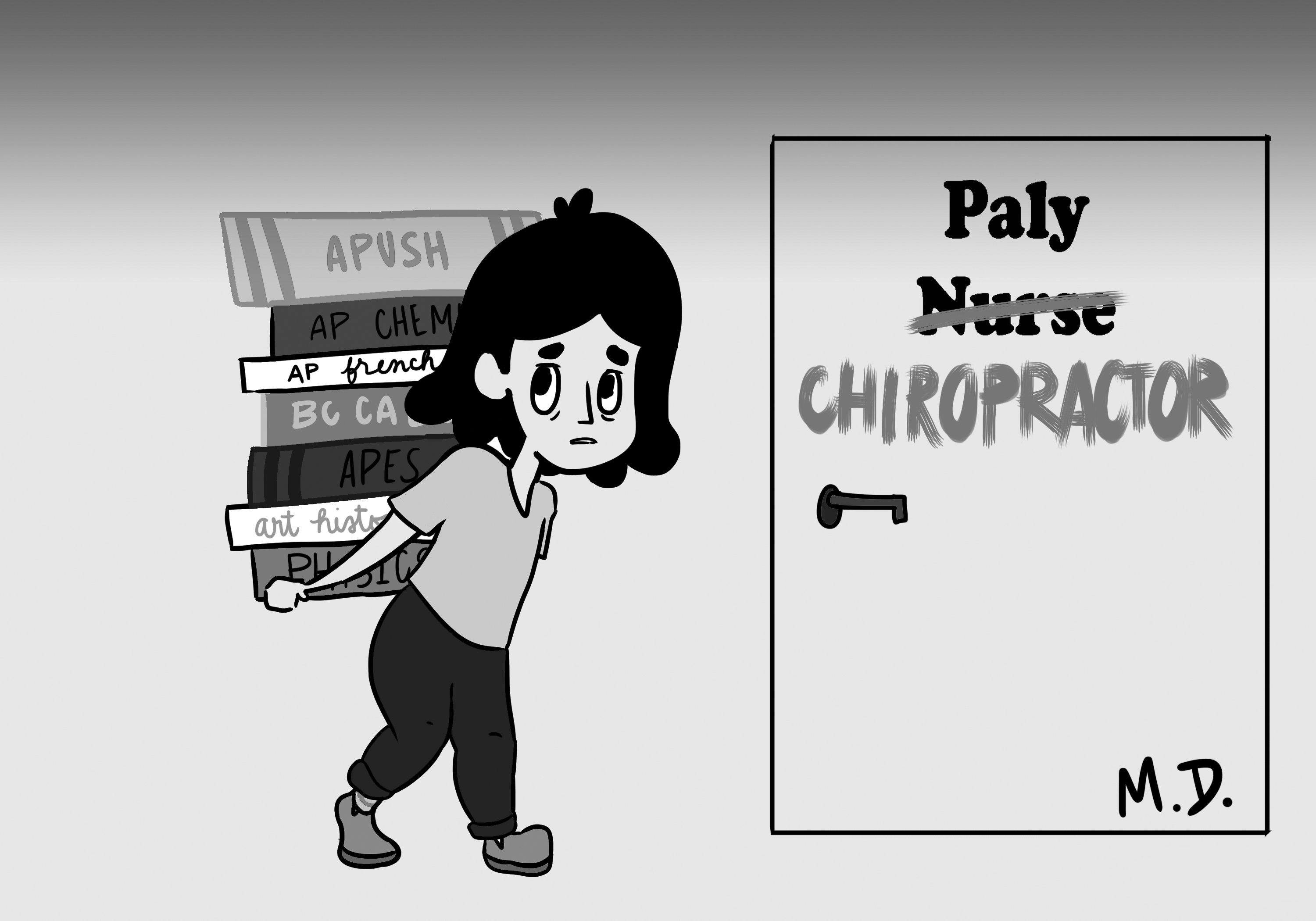 Student should take APs for passion, not for peer pressure

Every underclassman has heard notorious stories of the dreaded junior year, and before long they find themselves engulfed in the chaos. The  course options they were limited to in previous years have widened dramatically, broadened to include regular courses paralleled with an honors or Advanced Placement (AP) option. This gives students an opportunity to challenge themselves in whichever subject they’re interested.

The atmosphere at Paly, however, is so demanding that many students are overwhelmed by the pressure to enroll in AP and honors-level courses that they don’t find fascinating or aren’t inclined to pursue in the future. They are instead swayed by how their application will be perceived by colleges, and take increasingly challenging classes solely to boost their GPA and strengthen their academic image.

“A lot of the time, students don’t realize how social standards at Paly have evolved and shaped their class choices. [Taking AP classes] seems like the norm now, and many of us just go with the flow before actually thinking about what we want to study.”

Students are constantly aware of what classes peers are taking and how they are pushing themselves academically, especially in their junior and senior years, making them extremely self-conscious about their selected courses. Many students have reservations about taking a prep their junior year because of how others might view their academic drive.

It is common for students to think that in order to be successful, they must take a certain number of APs, as if the mere title or number will determine their admission into certain prestigious colleges. They focus on their academic image rather than the content of the course, which they will be devoting their entire year to studying.

In this way, students are often so caught up in the competitive environment, they forget that taking rigorous classes isn’t the one and only path to success.

“The stress that results from having too much work and/or feeling like there isn’t another option to achieve one’s goals seems to really be an issue in this area.”

Some students are mainly incentivized by boosting their weighted GPA. This attitude is detrimental, because it discourages learning and following personal passions and instead promotes the end result.

Weighted GPAs exist to give students credit for challenging themselves, not to be the deciding factor to take a course.

Thus, many take on an overly demanding schedule in order to satisfy the demands of their parents. The unrealistic expectations to follow in their parents’ footsteps may contradict their true aspirations.

If students enrolled in classes that they were truly passionate about, their interest in the subject would naturally drive them to work hard and want to succeed in the class. They wouldn’t have to invest energy into trying to falsely enjoy and get the most out of the course. It is much more difficult to motivate yourself to reach your potential when you aren’t absorbed in the material.

There is no correct answer to this problem, and it’s not realistic to expect Paly as a whole to change its mindset, at least in the short term. Students can make a change themselves, though, by preventing the overachieving atmosphere from shaping their academic decisions and instead pursuing their interests, regardless of what their peers are doing.

“The trick is to somehow get to the point where you’re comfortable telling people about what classes you’re taking, but to get there, you have to truly love the classes you choose,” Tomz said.

For example, Tomz has always loved the popular television comedy “The Office” and creating puns, so she chose to enroll in a class called Comedy Literature during her junior year. Very few students consider taking this course, but Tomz describes it as “the best class [she has] ever taken.”

“Balance is key, no matter what people say and no matter how much you think you can handle,” Tomz said.

It is important for students to challenge themselves in a subject that suits their personal passions, because it is the students who are responsible for their futures, and by pursuing their true interests will they have the most success.