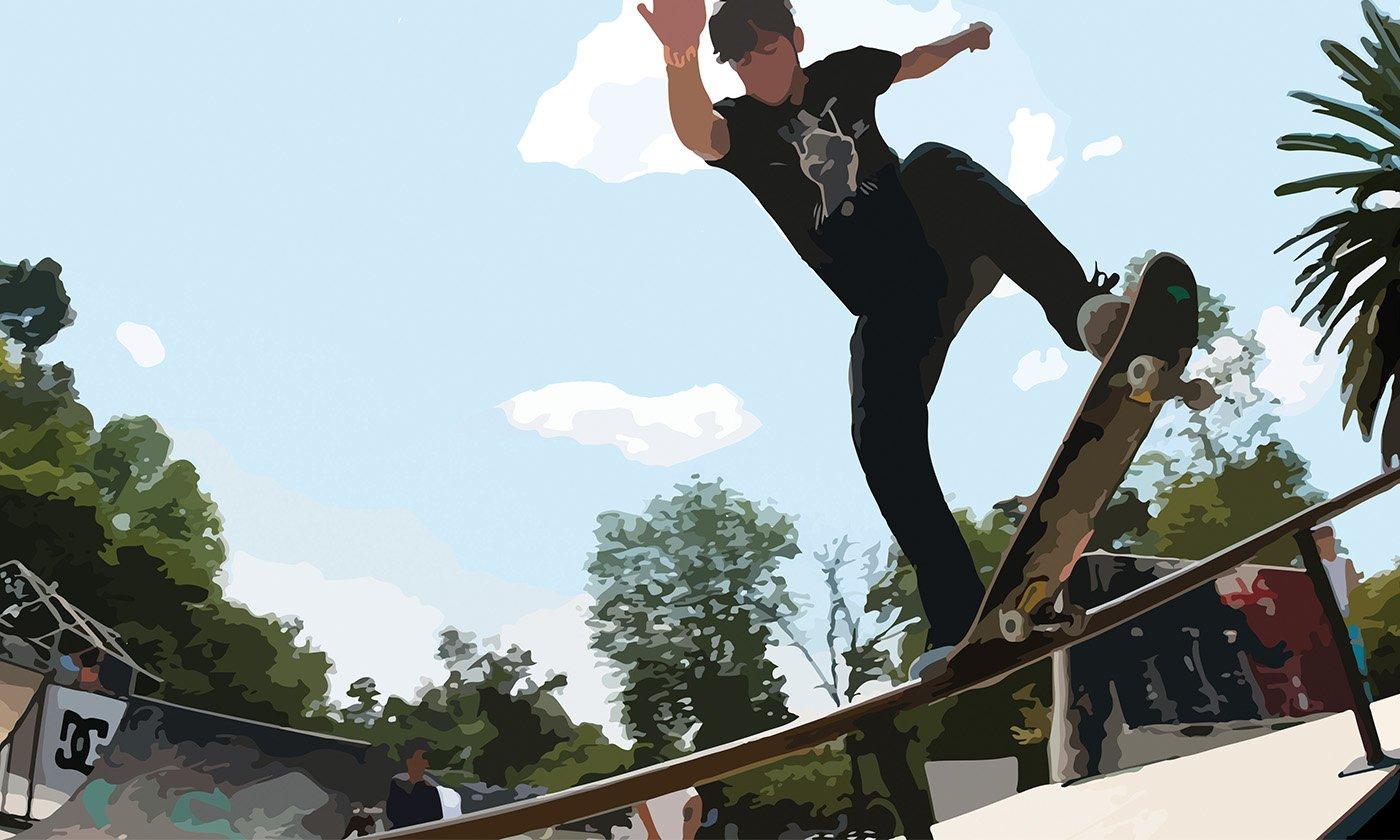 As  four rubber wheels hit the asphalt, spinning faster with each repeated stride, the skater glides rapidly through the street. He carefully maneuvers through countless parked and moving cars across the street until steadily slowing down as he arrives at his destination.

Although this image is typically is associated with a teenager seeking the thrill of skating, it has slowly expanded to images of college students getting to class, businessmen commuting and even parents dropping off their kids at school.

Skateboarding has drifted into mainstream culture due to its accessibility and associability, especially in Palo Alto, where parking is scarce and narrow streets generate heavy traffic.

Many choose to bike, but some simply lack the resources or space to store one. Skateboarding is regarded by many as a much more enjoyable experience than biking,  with it being a relative experience to other board sports like surfing and snowboarding.

In addition, there have been countless reports of stolen bikes in Palo Alto in the past few years according to Palo Alto Online, dissuading many from biking out of fear that their property may be stolen. In contrast, skateboards are fairly portable and can be carried into any room or car without issue.

As a form of transportation, skateboarding has become popular among college students and young adults, with some universities fully embracing the culture. Many college students have trouble finding bike racks on campus, and many students lack the space to store a bike. Bikes are especially susceptible to harsher weather, like rain and snow, which can damage the bike. Affordable and portable options for buying skateboards has increased accessibility exponentially as well, with most options only costing a fraction of the cost of a bike.

Many college campuses, especially the University of Southern California (USC) have developed a large skateboarding community, with USC even offering a “Skateboarding and Action Sports in Business, Media and Culture” class to its students, focusing on the growing popularity of skateboarding. Marketability among the skateboarding community has increased rapidly, with Nike Corporation stating it is “the fastest growing category within the Nike Brand.”

“I designed my curriculum to provide students with insight and understanding into every aspect of the business and culture of our transnationally networked skate community” said Neftalie Williams, professor of the class, in an interview with GrindTV.

Skateboarding is one of many actions sports which has experienced growing popularity, with athletes like Tony Hawk and Rodney Mullin taking the sport to new heights by inventing new techniques and tricks for others to master. Organizations like ESPN have developed structured tournaments like the X Games to increase popularity and competitiveness.

The IOC has also admitted skateboarding as an Olympic sport, with the competition starting in Tokyo during the 2020 Summer Olympics.

“I’m excited that this popular hobby can be brought into the public through the Olympics and hopefully it can improve the public’s perception,” senior Cooper Kim said.

The invention of the internet has also aided the explosive growth in skateboarding culture.

Social media has allowed skateboarders to show off tricks and techniques, accelerating interest dramatically. Tutorials allow for increased accessibility in learning fundamentals. Skateboarders have a much easier time finding each other, offering more motivation for each person to get better. For example, popular skateboarding publication RIDE Channel has steadily released a series of skateboarding tutorials taught by professional skateboarders, with each video amassing millions of views.

Ever since its rise in the 1980s, skateboarding culture has long been associated with a stigma of rebellious and non-conforming teenagers. Images of ripped jeans, graphic T-shirts and beanies have persisted through the test of time. Skateboarding has also developed associations with gangs and drugs, especially since many individuals who do skateboard have defiant attitudes.

With a large portion of its population growing older, skateboarding has gradually become de-radicalized and has matured.

“Now some of us have grown up, and it’s not so much counterculture anymore. but just really interesting culture.” said Williams in an interview with GrindTV.