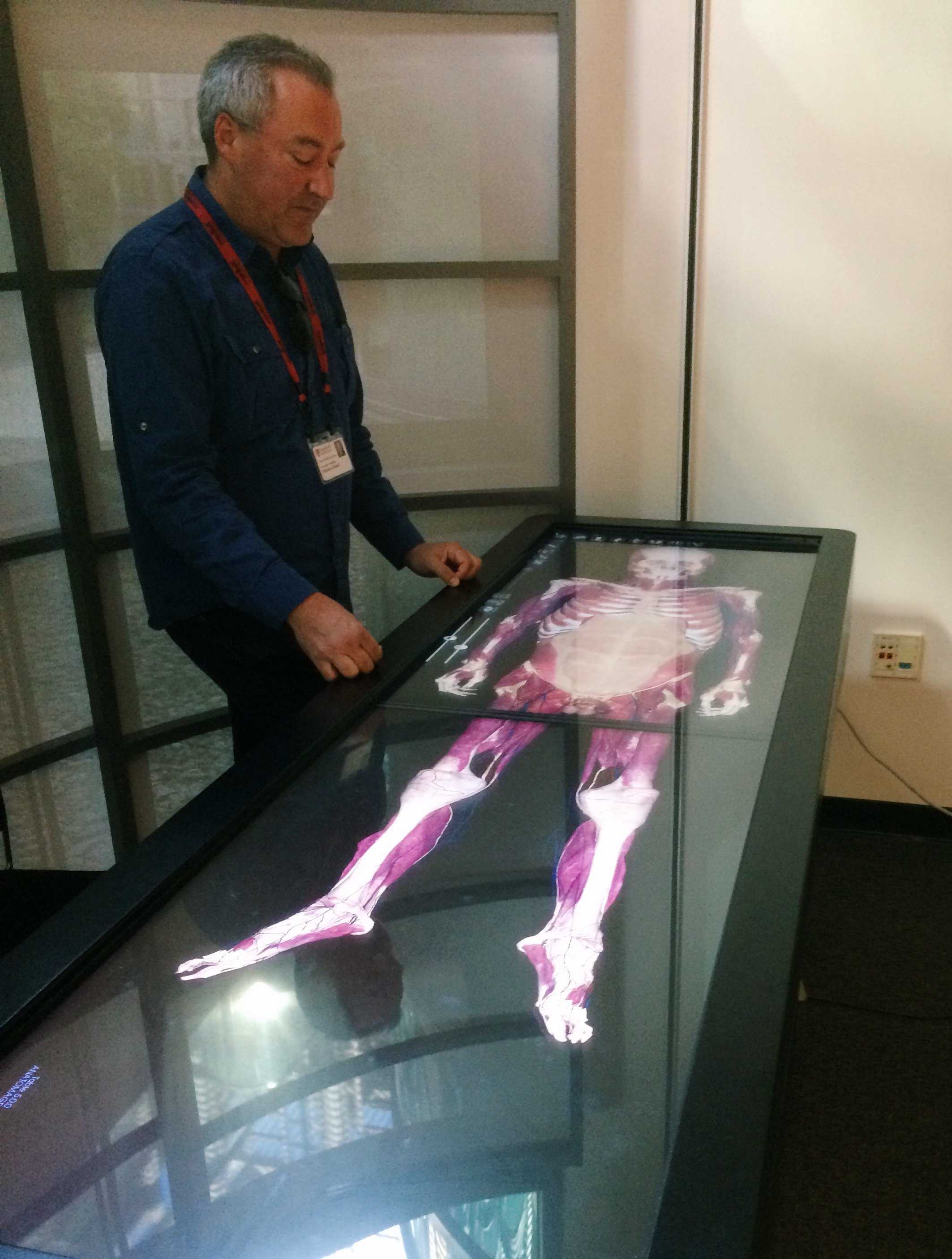 Across the street at Stanford University, medical students can rotate, slice and analyze a life-size body, all without the use of a real cadaver. The Virtual Anatomy Table, manufactured by Anatomage, is one of many virtual reality (VR) products Stanford’s Division of Clinical Anatomy is utilizing to enhance education.

While virtual reality does not entirely replace practicing on physical bodies, it adds a whole new dimension to student education.

“The technology gives the students a 3-D perspective that they may not have by looking at cadaver material,” said Bruce Fogel, Adjunct Professor in the division. “For example, today we were looking at the arm and were studying the nervous system. When we look at a dissection, it’s very difficult to follow that nerve, whereas with virtual reality or the digital resources, we can basically eliminate all the other anatomies. We just see that nerve, and it’s much easier to track.”

According to Fogel, the learning is predominantly still real-life cadaver, yet increasing the technological component would have no adverse effects.

“I think there’s a tremendous advantage to it [increasing the technology part],” Fogel said. “For just the practical reason, one can’t take a cadaver home to study whereas they will have access to the digital resource to study at any time.”

The only disadvantage Fogel sees is the cost.

“Students are very cost conscious, understandably so, and even the most reasonable apps that give us three-dimensional functionality can be $40-50,” Fogel said.

Technology Lead Matt Hasel also has a positive view on the table.

“The Anatomage table was really one of the first examples of the use of immersive technology,” Hasel said. “It takes sliced CT (Computed Tomography) data, and it’s doing a 3-D reconstruction on the fly so in real time we can manipulate the data, see it from different angles, zoom in and out, slice the data and get a unique perspective. To me, [the technology] is meaningful and does actually help people gain a better understanding.”

Jeffrey Kwong, a medical student at Stanford and beneficiary of the VR curriculum, also believes it is advantageous.

“Typically the virtual realities are pretty good as a learning tool. [It] definitely doesn’t replace [physical learning], but it lets you study wherever you want and on the go. It’s also very helpful to see stuff from different angles.”

According to Hasel, early research has shown that by engaging students using VR, society is  benefitting with better comprehension, better retention, higher satisfaction and more enthusiasm from learners about the content.

Another VR technology the division has incorporated is the Oculus Rift. When the viewer puts on the Oculus Rift goggles, they are miniaturized and placed inside an anatomical structure.

“We’re now moving over to the Vive,” Hasel said.  “This allows us to build a room-scale VR experience. We’re trying to scale up anatomy models so that we can walk around them and through them. The beauty is you get positional tracking in addition to rotational tracking. The Vive is also very compact and portable, that said, these setups are not inexpensive.”

Over time, the goal is to gain a smooth balance of VR that maximizes learning.

Hasel said, “The next step for us is to switch that over into a VR camera so that you interact with that.”