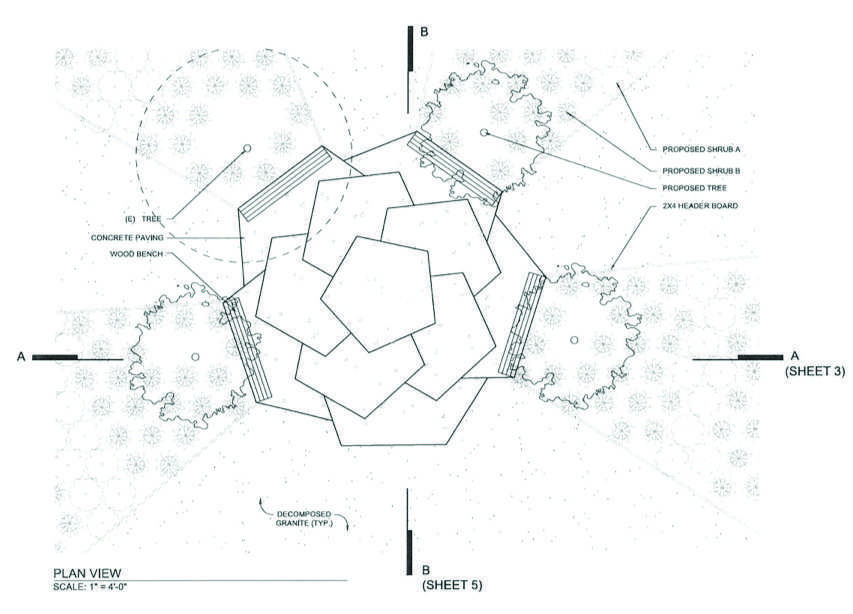 The proposed deck is rose-shaped with overlapping pentagons composing the foundation. The shape is inspired by a memory of Emily Benatar as a child, according to her mother, Lisa Benatar. When pregnant with her third child, Lisa Benatar was taken aback by the unkempt nature of the exterior of her midwife’s house.

“Emily looked at the house and said, ‘Hey Mommy, look at that beautiful rose,’” Lisa Benatar said. “In the middle of all the ivy, there was this one scraggly stick of a rose bush with one white rose on it.”

The proposed deck is rose-shaped with overlapping pentagons composing the foundation.

According to Lisa Benatar, this story perfectly captured her daughter’s ability to see the positive side of any situation. Lisa Benatar also believes the deck will honor her eldest daughter in its ability to bring together different groups of people — much as Emily had done.

Benatar graduated from Paly in 2011 and was a freshman at Washington University in St. Louis, when she was diagnosed with bacterial meningitis in April 2012 and passed away three weeks later in the hospital. Current vaccines cover the strain Benatar contracted, serogroup B meningococcal disease, but they did not at the time, according to the National Meningitis Association.

The Paly senior deck has been in poor shape and in need of several repairs for the past 10 years, and the new senior deck aims to create a “new gathering place for students to congregate and enjoy for years to come,” according to the School Board’s agenda for the Tuesday, Sept. 26 Board meeting.

The School Board made the decision to accept the donation due to a policy which requires donations to the district to get Board approval if they exceed $50,000.

“I just can’t be grateful enough to the [Benatar] family,” said School Board member Todd Collins during the Tuesday meeting.

Cain initially proposed the idea to the Benatar family of building something at Paly to honor Emily Benatar. The project evolved from a bench to a garden to finally, a new senior deck.

Cain believes a new senior deck is the best project to honor Emily and the memories they shared there.

“I do have a vivid memory of [Emily] attempting to sit [on the senior deck] before she knew the deck was designated to seniors,” Cain wrote in an email. “As seniors, we ate most of our lunches there.”

The lasting effects of Benatar on Cain and Paly were one of the driving forces behind the project.

“She was immensely talented,” Cain wrote in an email. “She was creative, athletic and incredibly smart and everyone loved her.”