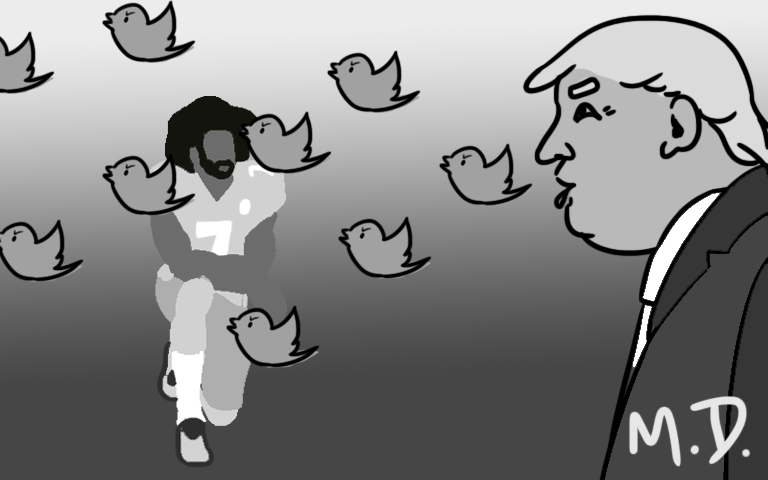 Colin Kaepernick is a modern day martyr. He isn’t dead. He isn’t holy. He isn’t fighting a battle for religion.

But he is a symbol of sacrifice and advocacy in a divided nation, a polarizing force who has been both commended and condemned for his protests and the discourse they generate.

We live in a world where white supremacists can walk through a college town wielding torches screaming “Jews will not replace us” and “blood and soil” (a Nazi slogan) with only a half-hearted reprimand from the President of the United States. A world where Philando Castile and Trayvon Martin, young African American men, are shot and killed by police without consequences for the officers. A world where minorities often find themselves bound by the confines of society, unable to break the vicious cycle of poverty. Scary times indeed.

Over a year has passed since Kaepernick first took a knee during the national anthem of a National Football League (NFL) game to protest racial inequality in America. He is no longer playing in the league, largely due to the publicity and controversy following his protest. NFL team owners, all white except for one, are unwilling to sign him.

On Sept. 23, Kaepernick’s actions culminated in a response from the White House.

“If a player wants the privilege of making millions of dollars in the NFL, or other leagues, he or she should not be allowed to disrespect our Great American Flag (or Country) and should stand for the National Anthem. If not, you’re fired. Find something else to do.”

It isn’t hard these days to provoke a Trump reaction on Twitter, but his tweets often quickly fade out of the spotlight. In the case of Trump’s NFL tweet, however, the response was immediate and sustained. The following day, over 100 NFL players knelt in a stunning display of defiance, and have continued kneeling weeks after Trump’s tweet.

This is the power of a martyr. A martyr is a person who makes a tremendous sacrifice for a cause and is seen as the driving force behind the cause.

The word evokes images of John Brown, an anti-slavery abolitionist whose death drove the North to pursue abolition, and Joan of Arc, a heroine wrongly burned at the stake.

Colin Kaepernick stands with them, having sacrificed his career. A martyr sacrifices, but more importantly, a martyr becomes a symbol, a leader representing a message even long after he or she is gone.

The power of a martyr comes not from what they say (or tweet) but from the power of their followers, who amplify and propagate their message well beyond the reach of a single person. That is why President Trump’s tweet had the exact opposite effect that he intended; instead of silencing Kaepernick’s voice, he amplified it by a thousand times. Believe me.

So whether you agree with Trump’s message that American society is racially biased against people of color or you agree with the President, we all have to acknowledge how Kaepernick’s actions have successfully engaged the nation in the discussion that he intended. He has not given many interviews on the topic; he does not speak at rallies, spewing rhetoric or giving simplistic sound bites. Instead, he took simple and consistent action.

He caused people to ask “why,” to do their own investigations and to come to their own conclusions. It is a thoughtful protest, one that inspires independent thought in a nation driven by mob mentalities. The impact of his simmering message is felt more acutely each week of the 2017-18 season as his protest spreads.

It spreads to Bellarmine High School, where 12 high school football players knelt in a game against Sierra High School. To Oakland, where catcher Bruce Maxwell, the son of a veteran, became the first MLB player to kneel for the anthem.

The platform varies but the message remains the same: this isn’t the America we want; change is needed.

Colin Kaepernick is a divisive figure in America, a rallying figure for some and the target of immense hatred from others.

As the NFL season rolls on and America attempts to close the growing divide between her citizens, Kaepernick’s protest holds strong. He is perhaps the most influential football player living today, in large part because his message transcends sports.

While Tom Brady will be remembered for Super Bowls wins and touchdowns, Kaepernick’s legacy extends to every past, present and future American citizen.

Possessing the bravery and courage to fight for the oppressed, the 6-foot-4-inch African American with the afro is an unexpected hero and symbol of resistance in the midst of hard times.

Colin Kaepernick, once a rising star in the NFL, once a Super Bowl starting quarterback of one of the most storied football teams in the nation is a modern day martyr.

The only question that remains is whether we as a nation will avenge his sacrifice and fight for his cause.