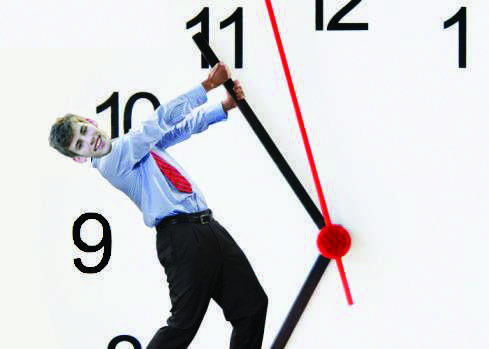 Dragging oneself out of bed each and every godless morning is a challenge that can only be conquered with our humanly form of ambrosia: coffee. But once a year, there is a Monday so despicable that not even the warm juice of South American beans can shake us from the firm grasp of shadowy sleep. This is “Sleepy Monday.”

Twice a year, we are asked by the U.S. Department of Transportation to change the time on our clocks, either moving them an hour forward or setting them an hour back. Depending on who you ask, the reason behind this varies. Some say that it’s to help farmers, some say it’s a government plot to keep citizens too tired to lead revolutions and some will even claim that it’s because every once in awhile the universe lags and Earth’s orbit freezes for a short period of time.

Unsurprisingly, all of these people are grossly misinformed. The real motivation for the time change that we all wholeheartedly despise is to save energy.

Daylight savings time was utilized by Germany first during their premier attempt at world domination to save coal for the war effort. Those darned Germans thought that if more of the day’s sunlight was utilized, there would be less of a necessity for electricity.

The logic behind this, unlike the logic behind Gavrilo Princip’s actions, was sound; unfortunately, it did not work — or, at least, it does not in our modern equivalent of the 1910s.

Studies have shown time and time again that daylight savings time does not save energy, but actually wastes it. A study done in Indiana found that during daylight savings time, a whopping one percent more energy was used in residential areas. This may not seem “whopping,” as it was previously described by yours truly, but given the fact that setting our clocks back is supposed to decrease energy usage. The fact that it does not just have no effect on energy usage but that it increases is absurd.

Along with this, daylight savings time has severely negative effects on the people who are forced to alter their entire lives at the request of our sovereign government. During daylight savings time, people are less alert as a result of a change in their circadian rhythm. This leads to an increase in automobile accidents, as well as an increase in accidents in dangerous working environments, such as mines and construction sites. Additionally, health is directly affected by the changing of our clocks. The rate of heart attacks increased by roughly five percent in the first three days following the clocks being sprung forth.Cluster headaches have also been shown to be triggered by the shifting of the clocks in either direction.

This injustice is more than just an inconvenience; it is a serious problem that must be addressed as soon as humanly possible. So stand to protect our precious hours of comatic-rest, and protest the power that the corrupt Department of Transportation has exerted over us citizens.