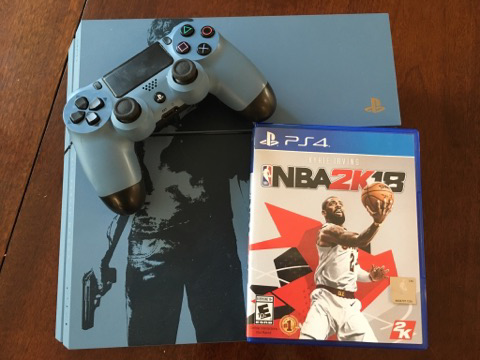 ) 2K18 has caught the attention of many fans as the highest-rated annual sports game of the decade. From allowing users to create a player to playing with current NBA players and teams, NBA 2K18 provides a range of modes to compete with friends, family and online opponents. This year’s edition of the game has retained all the modes from previous years, including My Career, My League and My Park, where you create a character and live life as an NBA player.

“I think that 2K18 is probably the best and most improved sports game out because it lets you explore the in-game city,” said junior Daniel Rabello. “For My Player, instead of just clicking some buttons to buy accessories for your character, you can actually walk to the literal store in the game, making it more realistic and visually appealing.”

Every year, the gameplay and graphics are driven up a notch.This year, the developers have enhanced them even further through the addition of more commentary, refined tattoos on players, newly-trending hairstyles, improvement of muscle tone and of making shooting forms for each player more realistic. Through these amendments, it’s safe to say that NBA 2K18 may be one of the greatest sports games ever.

“I really enjoy playing the NBA 2K series in general,” said junior Gerzain Gutierrez. “This year it looks amazing with the new Nike uniforms and shoes that they have incorporated. I like the My Career mode the best, and how they made it an open world where you’re automatically placed online, because it reduces load times. It’s also cool how you can go to the store and buy clothes or go to the barbershop to get a haircut and keep up with real-life trends in a virtual game. I think that my character is probably the flyest one.”

Many students have preordered the game to build up their players and gain advantages over each other.

The popularity of the game continues to rise as the developers add more detailed content. The competition level is so high among students that some are even spending an absurd amount of money to compete with their peers and add attributes to their character when playing in modes such as My Park, where a player can team up with friends and challenge opponents in a three-versus-three pickup match.

“2K is a great game that builds a community where everyone wants to beat their friends so they play more and more to get better,” said junior Stan De Martel.

The game also includes consistently updated team rosters; for example, when cover athlete Kyrie Irving was traded to the Boston Celtics and superstar Carmelo Anthony landed in Oklahoma City, the roster adjustment was made within a day Not only is the game up-to-date with all the current teams, but it also integrates all-time throwback teams such as the ‘96-’97 Chicago Bulls, the ‘07-’08 Celtics and the Showtime Lakers, allowing fans to experience the gameplay of many NBA greats such as Michael Jordan, Magic Johnson, Kobe Bryant, Allen Iverson and Shaquille O’Neal.

This addition is a fun twist to the game because gamers worldwide can test out how Michael Jordan’s famed 1995-96 Bulls would fare against the modern-day powerhouse, the Golden State Warriors.

“The new feature of throwback teams is interesting because it lets you play with the all-time greats of a franchise and allows us to get a glimpse of how older squads played since the gameplay is so realistic,” Rabello said.

As the year progresses, players’ ratings will either increase or decrease based on the way they have been performing throughout the NBA season, which is yet another great addition. Fans can also play with the new rookies in the league. Top picks Lonzo Ball, Markelle Fultz and Jayson Tatum, whose average rating was the highest 2K has ever made among rookies.

“It’s cool how new rookies are introduced because it provides more players that you can play with,” said junior Marvin Zou. “Nobody wants to see the same athletes participating every year. There are so many players that you may have supported in college and now you get the chance to use them.”