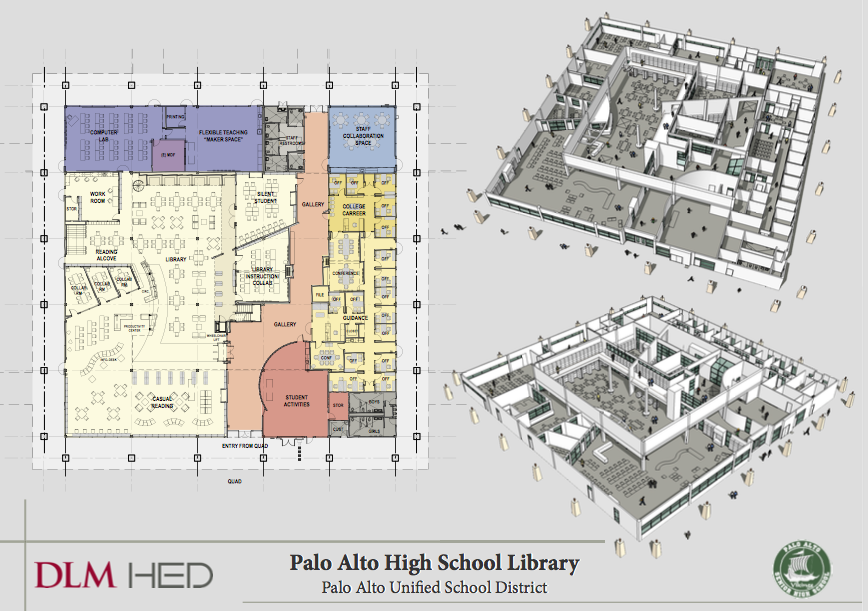 Paly’s latest construction project, the remodeled library, will be completed by January of 2019, according to Paly librarian Rachel Kellerman, who has played a large role in its layout and design.

The new library is part of the District’s plans to rebuild and improve all under-renovated buildings at Paly, according to Kellerman. The library, costing $9.8 million, is part of a $378 million Strong Schools Bond measure that Palo Alto voters passed in 2008. This measure has brought in new buildings such as the Performing Arts Center and the Peery Family Center, which both debuted in the past few years.

According to Kellerman, the renovations for the library were originally going to take place  before the construction of the gym. However, when Palo Alto resident and community member Dick Peery agreed to donate millions of dollars to the construction of a new gymnasium, the school switched its focus in order to ensure his donation.

In order to create a floorplan for the library, a planning committee visited other local libraries, researched ideas for libraries and interviewed students and teachers about what they thought would make the perfect library, according to Kellerman.

The team decided on a large walkway dividing the library into two sections in order to prevent students from passing through the library on their way to class and disturbing other students in the library. The section of the library closest to the robotics room and auto shop will be reserved for staff offices as well as Paly’s first teacher multipurpose conference room.

“The plan is to bring guidance and counseling from the tower building to the center of campus [by moving them to the Library]. This way the offices will be a central location for students around campus.”

After guidance and counseling are relocated, the District plans to remodel the tower building once a new bond gets issued. However, according to Kellerman, before a new bond is in place, the remaining money in the current bond will be used to remodel and make improvements on the language buildings.

The side of the library closest to the Media Arts Center (MAC) will function as the student side. It will feature a main library area with books, a study space and a section for computers that will surround a silent study room equipped with soundproof doors. Three group study rooms — modeled after the ones at Mitchell Park Library — will contain Smart Boards and conference tables.

The committee initially planned a second floor, but instead opted for a mezzanine featuring Paly’s archive of old school newspaper and magazines going back 125 years. According to Kellerman, the mezzanine surrounds only a small section of the main part of the library so most of the library will only have one floor.

One new section in the library is a Makerspace, a place where students and staff have access to a selection of hardware tools including 3-D printers. According to Kellerman, it is a space meant for building a vast selection of things up to the imagination, from popsicle stick figures to motor-powered computer cases that are used as transportation.

The library plans to have a Makerspace available to all students on campus. However, this project is only in the early stages of planning and does not have a budget yet.

“I plan to get a group of teachers and students together once we receive a budget to research and determine what we should have in our new space along with our goals,” said Assistant Principal Adam Paulson.

The new library also features skylights and large windows to improve the atmosphere by letting in as much outside light in as possible.

“The old library looked a little depressing, to put it mildly, due to the lack of natural light.”

In order to improve student comfort and library experience even more, the library plans to house a new selection of more comfortable furniture deviating from the chairs and tables common to Paly’s classrooms.

While most of the planning, laying out and designing has already been completed, the new library is still looking to receive its name. Students who want to be involved in the process for choosing a new name for the Paly library should submit their idea to the Google Form, which can be found at https://tinyurl.com/palylibrary.