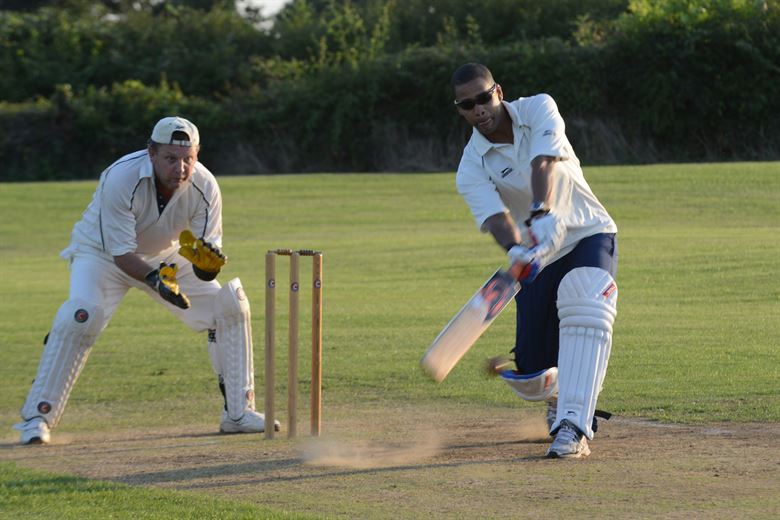 At the beginning of November, both Walter Hays and Hoover Elementary Schools, initiated a cricket unit in their Physical Education (P.E.) curriculum.

Although many students had experience holding a bat and throwing a ball, very few had done so in the form of cricket. Walter Hays P.E. teacher Ken Bunton said the number of students who knew how to play cricket hovered around 20 percent. So, the P.E. teachers at the elementary level took advice about how to teach cricket from Palo Alto’s very own cricketers.

Paly sophomore and cricketer Pratham Kataria said the P.E. teachers turned to him and his family for help. He then developed a few drills for the students.

“I was pretty happy to hear that cricket was being introduced to Palo Alto,” Kataria said. “I was supposed to go to the teachers’ training session on Aug. 10, but unfortunately, I had a game that day. However, my sister and my dad went and taught some drills about cricket to the teachers and staff.”
Kataria said he racked his brain for ideas on how to help the P.E. teachers demonstrate aspects of the game that while second-nature to him, would be difficult for newcomers of the sport to grasp.

“The first thing I thought of were the rules, of course,” Kataria said. “The people playing the game need to know the basic rules of cricket before they start playing the game. Also, you have to teach them how to hold the bat properly or how to hold the ball when bowling. After they have some of those basics down, I would focus mostly on fielding. Today, fielding divides a good team from an outstanding team. It is the most important aspect of the game.”

Bunton said once he taught these drills, the students began to excel. However, there were minor setbacks.

“Students picked up the skills of bowling and batting very well. Maybe the hardest part was to get students to swing at low to high instead of baseball style — holding the bat high and swinging level.”

Because there are quite a few similarities between baseball and cricket, Paly junior Nathan Kim, who started playing cricket during middle school for Jordan’s cricket club, said learning the mechanics of batting and bowling was not particularly difficult.

“Honestly, the rules were the hardest to learn,” Kim said. “For example, leg before wicket and stumpings were tricky to understand because there’s no corresponding rule in baseball. But the actual mechanics weren’t too difficult because I had played Little League baseball.”

But once the rules of the sport were ingrained and each knew how to play, both Kataria and Kim said the elements of cricket were very rewarding for them.

“[Players’] mental approach is totally changed,” Kataria said. “Cricket forces players to play positively. Without a positive approach, you cannot win a game. In addition, it will help with things like hand eye coordination, focus, communication, team spirit and also fitness. There are just so many things that kids will learn from cricket.”

Kim said in addition to having a different mindset when playing cricket compared to other sports, he had to approach the game differently because it wasn’t part of a culture he was from.

“I think it’s really cool to open your eyes to a new culture, especially a sport, and I genuinely hope that the elementary schoolers feel the way I do.”

Because cricket is a prominent sport in India, Jordan Middle School sixth grader Rohit Seshadri said he felt both pride and appreciation of his culture in hearing of the installment of the cricket unit.

“Not many Indian festivals or rituals are celebrated by the district on a consistent basis, so to see that cricket is being played makes me feel like my culture is finally being validated by the Palo Alto community,” Seshadri said. “It was hard to see many other religions and communities being noticed and celebrated by Palo Alto, especially when Palo Alto has a strong Indian population.”

Bunton said a new cultural experience is vital for the students he teaches, and he noticed how excited the Indian students were when they found out they would be playing cricket.

“One super athletic fifth grade boy said ‘finally, India is good at something,’ when I told class that in 2017, India was the best in the world at cricket,” Bunton said. “Cricket has been a very valuable multicultural experience for our students. It is a must for every school.”

Bunton said he hopes to continue this unit next year with a few more rules to make the games more interesting.

“This year, the goal was to keep it simple,” Bunton said. “We modified the game with three versus three, the fielders and the wicket keeper got batsmen out by fly out, bowler hitting stump or fielders knocking bails off stump when batsman is between crease cones. Next year, we will do this again with added four runs, six runs possibility and adding boundaries to the pitch.”