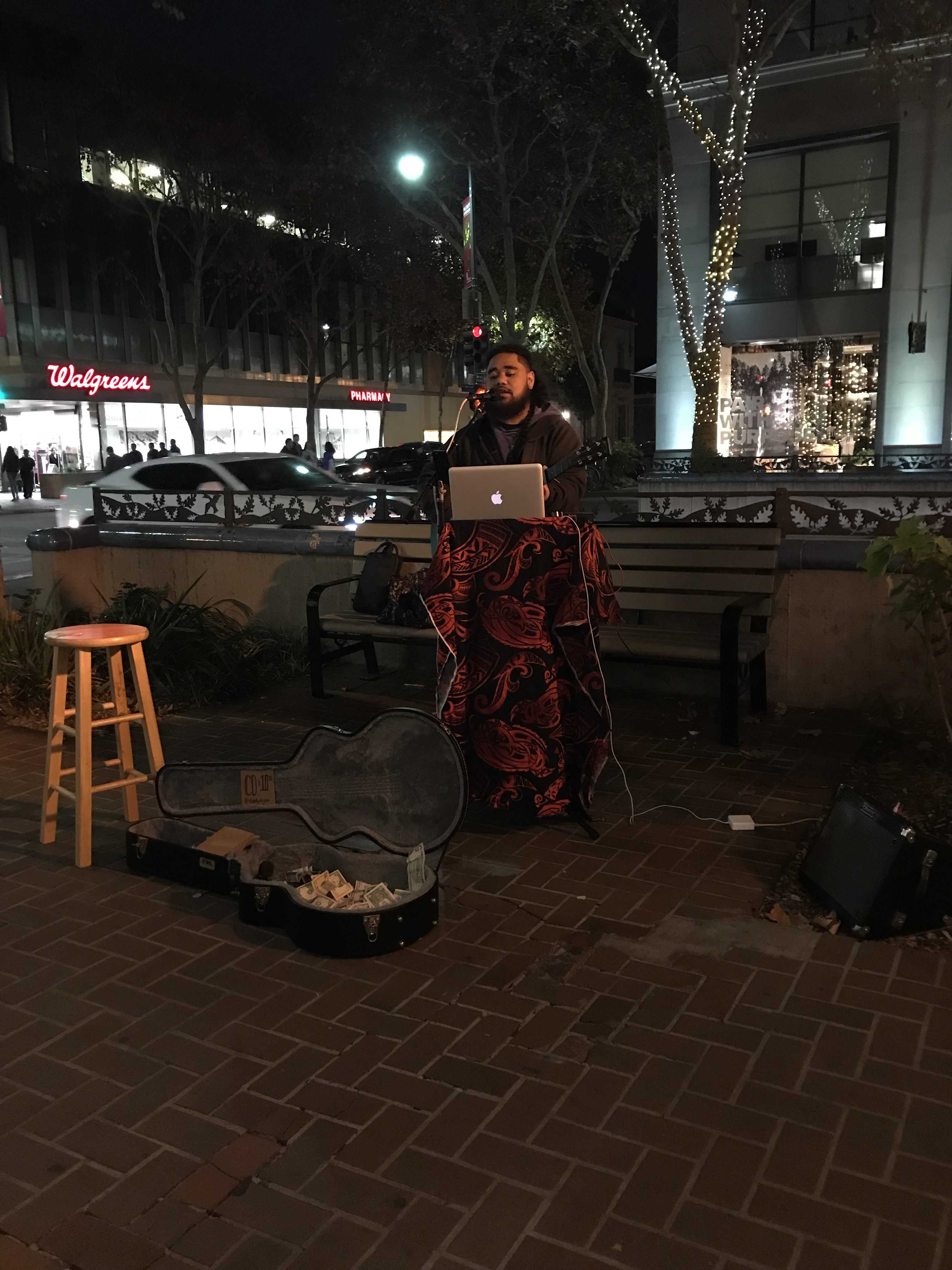 Among the futuristic gadget stores, cafes and gelato shops, downtown Palo Alto is home to a unique busker community that lines the sidewalks along University Avenue with open guitar cases and a sense of humble entrepreneurship.

Palo Alto boasts one of the more popular downtowns of the Peninsula; located near urban startup offices, Stanford University and a community of both new and old money, the streets brim with people with a liberal music preference and who often also have generously deep pockets.

The Palo Alto busker community is also a fusion of musical backgrounds and tastes, with performances ranging from a college student playing John Mayer on the electric guitar to a group of men singing Indian pop songs over radio instrumentals. Buskers of all ages and backgrounds captivate pedestrians, accruing an audience of passersby for their distinctive performances that echo throughout the street.

“There was one time I was getting dinner with a friend, but we ended up spending the rest of the night listening to performers downtown,” said junior Gigi Tierney. “I think we stayed for about half an hour listening to each of the four groups that were playing. That was the most [busking groups] I’ve seen downtown in a night.”

While many Paly students like Tierney flock to downtown Palo Alto to listen to buskers, a few students partake in this activity as well.

A busker is someone who performs in public places for gratuities. In Palo Alto, the majority of the buskers perform and play music.

“Before we went busking, I saw other musicians and singers performing downtown,” Fuh said. “I didn’t see many string ensembles, so when we began busking, it was cool to bring less common music to downtown.”

Kim chose to follow in the footsteps of older PACO members who had performed in downtown Palo Alto to earn money before.

The quintet thought it would be a fun way to enjoy and practice music while making money, and as a result, decided to give busking a try.

“Playing in Palo Alto is a really special experience because the people who walk by on University are so diverse. It’s great to see how families and friends of different backgrounds and ages enjoy our music. Also, there are so many people in Palo Alto that enjoy the arts; to have an audience that is really receptive and appreciative of the music is so rewarding.”

As PACO is a competitive orchestra club, Fuh values the more laid-back and forgiving experience of busking.

“There’s a lot less pressure to give a perfect performance,” Fuh said. “It’s more about enjoying the music, ambience and company. Whenever we go busking, we mess up at times, but we can laugh it off because it’s really just about enjoying the moment.”

According to Kim, the most favorable and popular time for buskers to perform is during the nighttime, preferably on weekends, in order to maximize audience size.

“We usually go around 6-8 p.m. on weekends, which seems to be the busiest time,” Kim said. “I’ve heard from friends who went during lunchtime that it’s not as busy.”

Dyno also began his busking career as a student performer.

“[My sophomore year], a friend and crush of mine at the time said, ‘Hey you know how to play guitar and you sing a little, why don’t you go out and play on the streets?’” Dyno said. “I had never done anything like it before so it was the last thing I’d thought I would’ve ever done. She said [she’d] go with me and put out a little tip jar so I could get some money and buy her dinner. I was like ‘oh yup, I’m doing it.”’

Dyno’s performances downtown are a lot more casual than his scheduled performances: he’s often taking song requests from the audience and improvising the mixing of songs on the spot.

A Bay Area native, Dyno knows most of the more popular R&B lyrics by heart, and is known for his covers of popular songs. He also occasionally harmonizes with artists on their original tracks, and every so often, Dyno sporadically performs Tongan music.

“I love [busking] most because it’s an honest reaction. If the people like it, they stop and listen; if they don’t, they can continue on.”

Most buskers perform either in Lytton Plaza outside of Pizza My Heart, along both sides University Avenue from Emerson Street through Cowper Street or in the inner plaza near the Three Seasons restaurant.

Otherwise, one can simply enjoy the diverse array of music genres and performances by heading downtown over the weekend.

“There started my love for performing,” Dyno said. “I still get stage fright, so most of the time you’ll see me singing with my eyes closed because in those moments I zone out even though there could be 30 or 100 people there, it’s just me sharing my story through songs.”