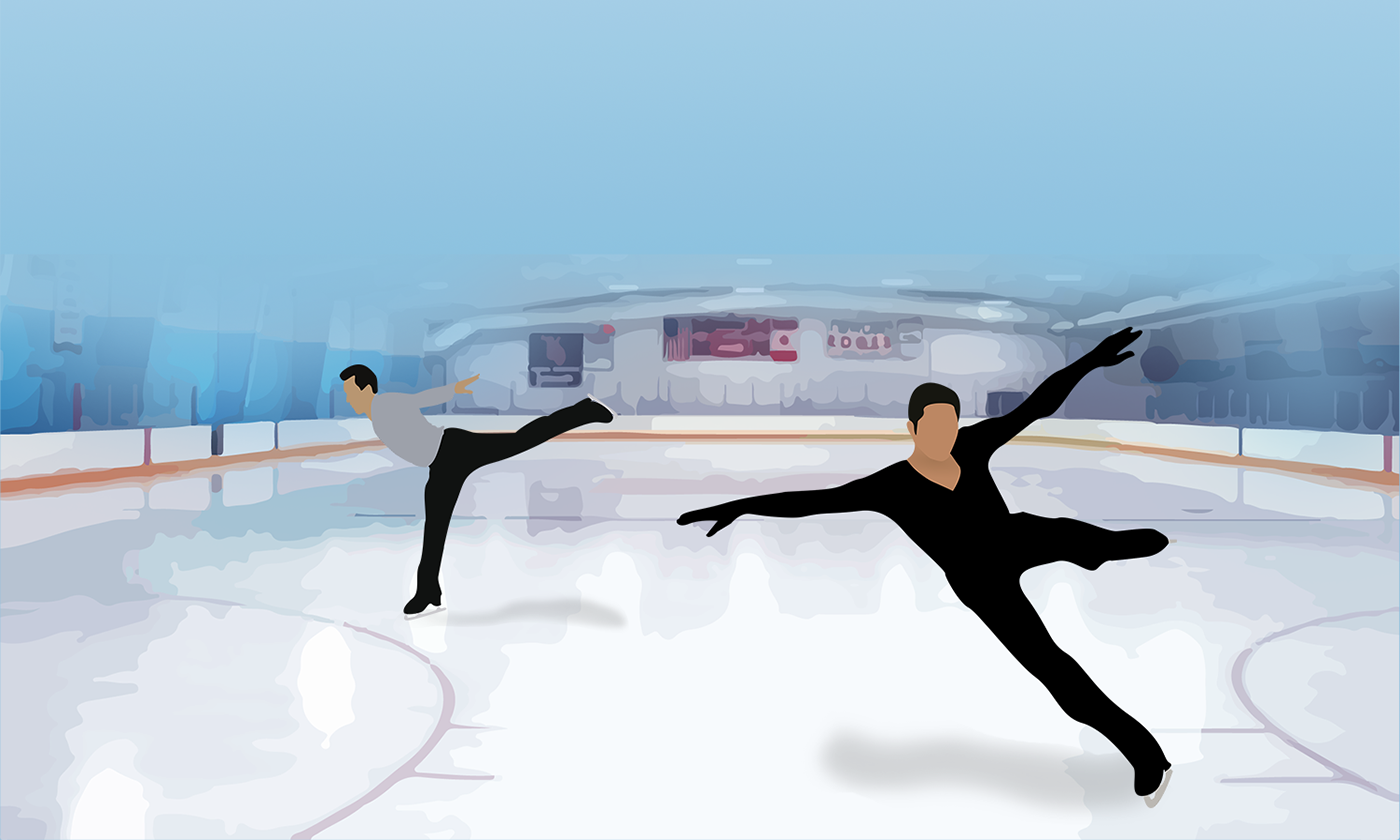 The effortless, graceful glide of a sharp blade traveling over glistening ice. The rush of exhilaration that accompanies the perfect landing of a jump. The crisp, frosty air contrasting the inner warmth produced from flying across a shining rink. These are just a few of the many beauties of figure skating that juniors David Foster and Andrew Shih have been surrounded by since they were young.

Foster’s love of figure skating emerged after he and his older brother experimented with many different sports during their childhood. According to Foster, he was drawn to the less competitive aspect of figure skating.

“It’s an interesting sport that not a lot of people do, especially [not] boys, and [it’s] something I can do more recreationally.”

Foster skates at Winter Lodge twice a week in addition to working there, which he said gives him an opportunity to skate more often. According to Foster, he would love to be able to skate even more, but doesn’t have the time.

Shih also experimented with many different sports when he was young and, like Foster, was ultimately drawn to figure skating. Shih’s involvement with skating was also partially caused by his sister’s passion in skating.

“When I was around 4 [and] my sister was around 7, we used to live in Fremont, and my mom took us to this ice skating rink one time,” Shih said. “My sister got the hang of it really quickly, and I just kind of trailed along. I kept falling, every single time. And then my sister started getting more serious and then my mom also started to get me into it too. Afterwards, I cycled through a bunch of other sports — I did soccer, fencing, swimming — but in the end I just returned to skating. When I was 11, I took it really seriously, too.”

His sister’s desire to pursue skating caused Shih’s parents to encourage him to continue as well. Shih said his parents wanted to keep both kids in the same place, so he needed to continue skating.

However, his parent’s encouragement to pursue skating wasn’t the only impetus that drove Shih to continue with the sport.

“I really enjoyed it because I thought it was really cool how you’re literally skating with blades on your feet, and you’re going really, really fast and you’re just jumping all over the place, doing, like, two rotations in the air and you’re spinning really fast, too. And it was cold in the rink, and so if you were sweating, it kind of balances out with the coldness. I think [I enjoyed it because of] the combination of how exhilarating the sport was, and it was an exercise, too — it was just a perfect combination and it was fun.”

For Foster, the satisfaction and pride of completing a stunt after working hard at it is one of the most rewarding parts of skating.

“My favorite part about figure skating is the amazing feeling of launching into a spin or landing a jump,” Foster said. “It’s really fast and powerful, and it’s gratifying when you’re able to do it right.”

However, before reaping the benefits of the many positives of skating, there are a few obstacles a boy interested in figure skating must overcome, according to Foster and Shih.

One obstacle skaters of all genders face is the price of skating lessons, skates and access to skating rinks. According to Foster and Shih, taking figure skating seriously can be expensive.

“The one thing that I was surprised by as I did more and more skating is the inequality — as a sport, it is difficult to advance without investing in it financially, at least in this area.”

The requirement of a skating rink to practice the sport also poses an obstacle to many, according to Shih.

“Unlike basketball or soccer, where you can just practice in your backyard, you actually have to go to a rink, because you can’t freeze your pool, right?” Shih said.

According to Shih, in order for a skater in this area to get to a really good rink, one may need to drive to Redwood City, Calif. The distance of the drive contributes to the time taken out of the skater’s day for the sport.

“Winter Lodge is the closest place to [go skating], but it’s only open in the winter, and there are far more opportunities for girls there than boys,” Foster said. “There are some classes that I cannot take, because they are for girls only, which limits the amount I can practice in classes.”

In addition, being a male interested in figure skating sometimes has negative social implications that may affect a boy pursuing figure skating, according to Shih.

“When I was younger in figure skating, everyone is going through puberty and everyone is judging everyone. I kind of didn’t really tell anyone that I figure skated, because everyone probably just would’ve made fun of me because I was a guy that figure skated. … People would think that it was more feminine.”

However, these stereotypes and judgements from his peers didn’t impact Shih’s love for figure skating.

“When I’m on the ice, I don’t even think about that, because it’s just like you’re so focused on actually hitting your jumps and your spins and all your footwork, and it doesn’t matter,” Shih said. “I feel like it adds on to the argument that there’s also a lot of power and ferocity that goes into skating a routine well.”

Though many try out different sports and may switch interests as their passions change in middle school, high school and perhaps later in life as well, Shih advises those interested in skating to start at a young age.

“The ages people are landing jumps are getting smaller and smaller. You have 10-year-olds landing triple jumps already. It’s kind of crazy.”

According to Foster, many people try out figure skating but give up when they get older.

Foster encourages people  to continue with the sport. The sport’s combination of many different aspects, including dance, coordination, concentration and strength makes it an interesting and fulfilling activity, according to Foster. In addition, it is an excellent work out, Foster said.

Furthermore, Shih said the sport has taught him important lessons about life. Skating taught him the importance of waiting for results to show and being willing to put in hard work in practice, Shih said.

“I learned that patience is a real virtue,” Shih said. “There’s this jump called the axel — it’s one and a half rotations and it’s kind of like every skater’s big first milestone — when you reach it, you feel really accomplished. I spent almost two years on it, and when I finally landed it, I was really overjoyed.”