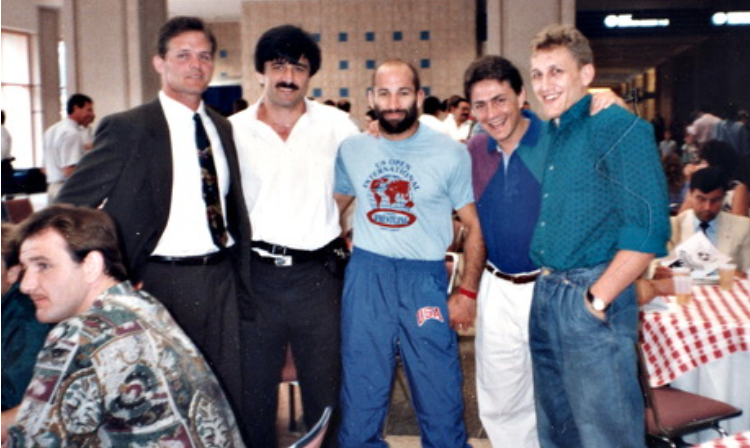 Dave and his brother Mark Schultz were both state champion wrestlers in high school and continued to win more medals at the collegiate and professional level. The brothers’ success on the mat soon captured the attention of millionaire and American philanthropist, John Du Pont.

Du Pont was a sports fanatic who was never quite good enough to compete in sports himself, but channeled his compulsive obsession through sponsoring many sports teams. His next big project was to organize a super squad of citizen athletes under the name of Team Foxcatcher. When Dave was offered a spot on the team, Du Pont’s money was too green and he was too powerful and influential to be turned down. In 1989, Dave moved onto the Foxcatcher Farm with his family, to be the new wrestling coach of Team Foxcatcher. Along with coaching the Foxcatcher wrestlers, Dave was well on his way to winning another gold medal in the 1996 Olympics.

“[Dave’s work ethic] was inscribed within him from a time since he was 11, 12 years old,” Philip Schultz said.

As mentally and physically demanding the sport of wrestling is, Dave was able to channel his passion and competitive nature into dominating on the mat according to his dad.

“He incorporated the whole damn thing with grace and ease. He was elevated because of the sport. The sport actually moved him towards the light that was his.”

On top of the strenuous nature of the sport, the Foxcatcher wrestlers were put under great pressure and possibly sexual abuse by Du Pont. Confirmed by many coaches and wrestlers, Du Pont allegedly removed wrestler Andre Metzger from the Foxcatcher team for declining his sexual advances. According to Mark, Du Pont invented a wrestling move dubbed the “Foxcatcher Five” that consisted of grabbing another wrestler’s testicles with five fingers. Du Pont also faced charges of sexual abuse in 1986 and as a result, his wrestling program at Villanova University was disbanded, according to the Philadelphia Daily News.

Du Pont’s eccentric behavior quickly escalated and though the athletes grew suspicious, his wealth protected him from any allegations. The conspiracy theorist believed ghosts and Nazis lived on the Foxcatcher farm.

When Du Pont learned Dave would soon leave Team Foxcatcher for a wrestling job at Stanford University, his idiosyncrasies only intensified, until the last string of his mental sanity snapped. On a Friday afternoon, Du Pont drove onto Dave’s driveway and shot him dead.

The timeline of events leading up to Dave’s death was adapted into the 2014 thriller “Foxcatcher” starring Mark Ruffalo, Channing Tatum and Steve Carell.

The Schultz family has kept in close contact with the Paly community since Dave’s tragic death. Nancy graciously donated Dave’s Olympic jacket to Paly, displayed in the new Peery Center.

“We constantly interact with people that have grown up with the Schultz brothers and we get to hear their wonderful, insightful stories. Dave Schultz is more than just a portrayal from an actor, he was a humble, kind, diplomatic soul who laid a path for us to follow.”

Nancy Schultz and U.S. Wrestling have worked in collaboration to create the Dave Schultz Memorial International, an annual wrestling meet in Colorado Springs that honors the “spirit of friendship, sportsmanship and goodwill” that Dave epitomized. Posters, medals and plaques in memory of Dave line the walls of the new wrestling room. The National Wrestling Hall of Fame sent Paly two brass plaques that hang on the entrance of the wrestling room dedicated to Mark and Dave. Paly wrestlers view the Schultz brothers as the gold standard of wrestling.

“Say Jeremy Lin is super good, Dave and Mark would be comparable to two Jeremys,” said junior wrestler Aidan Gans. “They definitely are huge factors in the wrestling community, and not just for us at Paly… I mean they are the most decorated brothers in the U.S.”

As one of the most reputable international wrestlers of his decade, Dave won a combined 16 medals in the World and U.S. National Championships, and exemplified some of the most technical matches seen in wrestling history.

“He’s a huge role model for me and all of us in the room,” Gans said. “If you are a Paly wrestler that wants to be one of the best, then you really look up to them because they came out of the same program, and they truly are some of the greatest wrestlers.”