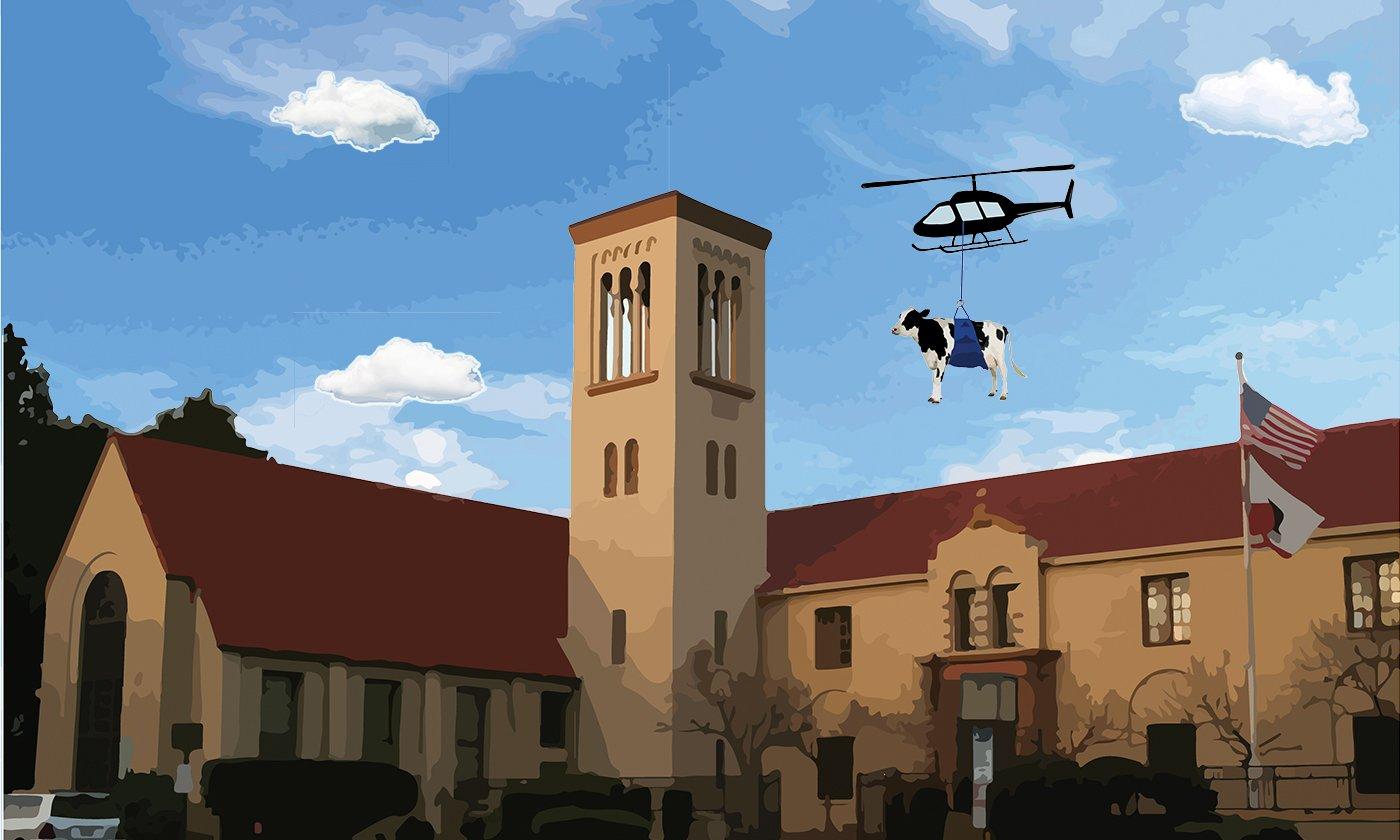 The history of the tower building

The bell tower of Palo Alto High School will be 100 years old in 2018. Plagued by rumors involving cows and helicopter rescues, few people know the truth of how the building  came to be.

Palo Alto High School was originally constructed in 1918, though most of the school was demolished and heavily modernized in 1972. The two-story tower building, however, was left untouched, making it nearly 100 years old and a historical landmark.

The Paly bell tower is known as a campanile, or a freestanding bell tower. Campanile is an Italian term derived from the word campana, meaning bell. The Campanile, Paly’s newspaper, was named after this term in 1918.

Since its construction, the bell tower has overseen a plethora of events. Perhaps the most infamous event that took place in the bell tower was the senior prank that occurred in the late ‘90s.

Despite being a well-known legend among Paly students and staff, many people doubt this prank’s credibility.

“I heard that this one grade brought a cow up to the second floor of the bell tower, I don’t know if it actually happened though.”

Math department Instructional Supervisor and Paly historian Arne Lim has conducted school tours for Paly alumni from as far back as the class of ‘45, and has never heard an alumni group discuss the alleged prank.

Lim said he can’t confirm the prank and thinks that the story is simply a “legend passed down from generations.”

“The story details are a little unclear, but from what I know, a bunch of seniors brought a cow up to the second floor of the bell tower as a prank,” said junior Henry Saul. “I’ve heard different accounts on when this happened, or how they got the cow out and whether the pranksters were punished, but everyone I know agrees that seniors brought a cow up the stairs of the tower building.”

According to an article from The Campanile, Volume LXXV, No. 2, Oct. 2, 1998, seniors placed “a cow on the top floor of the tower building.”

The seniors were able to get the cow to the second floor of the bell tower by coaxing it up the stairs. Once there, however, the cow was stuck.

“It took them forever to get that cow down from there.”

According to Science Focus, a science magazine, it is extremely difficult for cows to walk down stairs especially a steep lengthy flight, such as the stairs located in the bell tower.

Stuck at the second floor of the bell tower with no way to get the unfortunate cow down, stories differ greatly on how Paly administration ultimately removed the cow.

“I think [the prank] is really funny because cows can’t go down stairs, so I heard that they had to get a helicopter,” Saul said.

Some students and staff, including Saul and junior Kaitlyn Ho, have heard Paly administrators were forced to send a helicopter to rescue and return the cow to safety.

“One of my teachers told me they had to get a helicopter to get it down,” Ho said.

But many are skeptical of this rumor, saying using a helicopter seems improbable.

“I think it makes more sense that they used a crane to get the cow down,” said junior Warren Wagner. “Getting a helicopter would be super expensive.”

According to Occupy for Animals, a non-profit organization committed to ending animal cruelty, cranes are not generally used to transport live cows due to animal cruelty concerns.

However, it’s unlikely that a helicopter was used in the Paly prank due to the high cost of acquiring a helicopter.

“[Renting a helicopter] is typically $1000 per hour with a minimum charge of two hours.”

In addition to the alleged prank, a student “sit-in” took place in the building in 2009.

Paly administration suspended all students involved with the infamous 2009 egg wars after vandalism and destruction of property occurred on Gunn’s campus, according to The Mercury News.

Egg wars, an unsanctioned spirit week tradition where seniors and juniors meet up at night to throw eggs at each other, is looked down upon by school administrators.

“It is not a harmless tradition,” said Assistant Principal Jerry Berkson in a Paly Voice article from October 2009.

Many students thought this punishment was unwarranted and severe, consequently organizing a student sit-in at the tower building the following Thursday morning in protest.

Nearly a hundred students participated, according to an article from The Paly Voice in October 2009, though most left for class by 8:15 a.m.

Throughout its history, the tower building has been the site of extensive change and controversy. Though the current bell tower is the same as the one constructed in 1918, it has been remodeled various times.

In 1968, the building was seismically retrofitted to increase safety in the event of an earthquake.

The campanile section of the tower building was strengthened again in 1989 following the Loma Prieta earthquake.

Administration plans to further renovate the area, hoping to include over 200 mailboxes in the reception area, as well as new bathrooms and an elevator, according to an article from The Campanile in January 2014.

The partitions currently dividing the guidance hall will also be removed, and the guidance offices will become an open hall.The tower building renovations, however, are not a top priority according to Lim.

“With all the construction projects going on campus, this will be one of the last ones because there are no students here,” Lim said to an alumni group. “We try to do the student stuff first.”

Though there have been changes to the bell and tower building throughout the years, and administration plans to improve the building, it is highly unlikely that the building will be destroyed according to Lim.

“There has been enough of a contingency to say ‘lets not get rid of this building,’ and it will not go away” said Lim in a Campanile article from January 2014.

This confirms that the tower building — along with it’s quintessential glory and history —will not be leaving anytime soon.