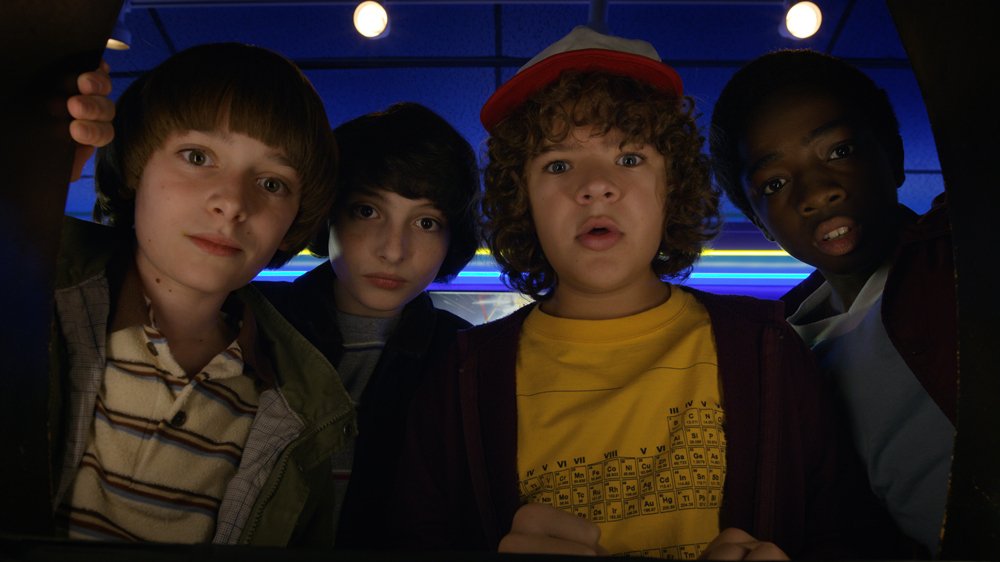 Rarely will a show come along that manages to attract all types of television addicts, a series that captures the attention of viewers who prefer suspense and danger, paranormal fanatics, drama and mystery lovers and even the suckers for a classic teenage love triangle.

In light of the release of the highly anticipated second season of “Stranger Things” to Netflix, we ask ourselves, “what is it about the popular television series that makes it so appealing to so many different people?”

There is certainly an attraction to the simplicity of children’s lives, an appeal founded in the innocence with which they think about the world and in the way they confront problems.

Palo Alto High School parent Manuel Amieva said the effervescence and charm of the group of middle school kids that assume the lead roles on “Stranger Things” are what got him hooked.

“I think that the strength of the show is that they’re showing [the viewers] the plot through the eyes of the children. I find them to be both funny and insightful.”

There are several actions the children take to solve the mystery plaguing the town that demonstrate these characteristics. First, the children eagerly consult their favorite teacher to resolve confusion about the “upside down,” an alternate dimension, with the naive notion  that their teacher must have the answers about this parallel universe. Then they creatively connect this unknown to a theory found in the fantasy tabletop board game Dungeons and Dragons that they play.

The analogy, although childish, gives the town’s police chief insight into the case and brings the police department further along in the investigation.

“The children basically are the detectives; they even know all kinds of things about history,” Amieva said.

They communicate with each other using a walkie talkie system, through which they create signals such as “code red” and habitually sign off with the words “over and out,” a system of correspondence that proves to be efficient.

How these young, innocent children are able to use their strengths and extensive knowledge about seemingly-inapplicable topics to cunningly keep up with the mystery, oftentimes one step ahead of the police chief, attracts a widespread viewership.

With only rickety bicycles, walkie talkies and wild imaginations, the children create a wonderful story that viewers cannot resist.

Directors Matt and Ross Duffer (the Duffer brothers) toyed with a recurring theme from United States history — government mistrust — to strengthen the plausibility of the paranormal elements within the plot.

According to a New York Times article by Lynn Vavreck, “In the economic hard times of the early 1980s, multiple polls conducted by news media organizations like CBS, The New York Times and The Washington Post showed that only 29 percent of Americans trusted the government to do the right thing.”

“Stranger Things” introduces the reasoning for this lack of trust by demonstrating how the public is oblivious to the government’s unethical human experimentation happening in their hometown.

This concept may seem incredulous and strictly limited to science fiction; however, Project MK Ultra, a Central Intelligence Agency (CIA) mind control program carried out in the early 1950s, involved experiments dangerously similar to those in the show.

During its early years, the project recruited former Nazi scientists involved in the creation of several harmful substances during World War II, some of whom had been convicted in the Nuremberg trials and escaped prosecution.

U.S. and Canadian test subjects were often subjected to illegal activities that aimed to develop drugs or methods used in interrogations involving torture. These dangerous innovations later enabled the CIA to weaken a subject and force confessions through mind control.

Some unethical methods included the use of Lysergic Acid Diethylamide (LSD) for manipulation, isolation, verbal abuse, psychological torture and hypnosis: many of which were administered to the young character Eleven in “Stranger Things.”

While Project MK Ultra was definitively shut down in the mid -‘70s, it is not far-fetched that similar experimentation could have occurred just a few years later in 1983 when the show takes place.

The directors managed to incorporate various aspects of life in the ’80s in the show, engaging those who lived through the iconic decade and giving younger watchers a taste of what they missed out on.

In fact, it would have been difficult to maintain the suspense of the show if it were set in the present, as opposed to in 1983.

“I don’t think the events that occurred in the show could have been possible with cell phones, because [the kids] would have been able to take pictures as evidence, which would have spread all over social media,” said junior Luc Pardehpoosh, a “Stranger Things” aficionado. “It wouldn’t have been a mystery at all.”

A significant portion of the initial plot revolves around the whereabouts of two significant characters, Will and Eleven; the hunt to retrieve them would have been halted by current technology’s ability to locate individuals.

“If the show were [set in the present], parents would be able  to track their kids much more easily.”

He explains that tracking devices would have prevented kids from pursuing their adventures, as they oftentimes disappeared from home for days at a time.

“It seems like in that time period, parents were not as strict with where their kids were,” Pardehpoosh said.

Additionally, the soundtrack blends hits from The Clash, Toto, Tears for Fears, The Bangles and Foreigner, bands that dominated pop music in the ‘80s.

The directors also use “Every Breath You Take” by the Police and Cyndi Lauper’s “Time after Time” in addition to eerie, synth-based tracks produced by the talented Kyle Dixon and Michael Stein.

With the release of the celebrated movie “Ghostbusters” in June 1984, the kids in the show demonstrate their attraction to pop culture by dressing up as the lead characters for Halloween.

Along with music and cinema, ’80s fashion is represented well through the entire cast’s style, particularly by character Billy Hargrove, who was introduced in the recently-released second season.

He is a hot-headed teenager whose clothes speak for his nature: he wears rugged denim jackets paired with tight jeans, ample leather and deep V-necklines.

What cannot fail to catch the viewer’s attention is his greasy mullet, an infamous hairstyle that depicts a cropped front and long back that covers one’s neck. The trend peaked in the ’70s, led by rock legends such as David Bowie and carried over into the ‘80s.

With the addition of these quintessential details, the show posesses a retro charm that is sure to attract a larger audience.

The show revolves around a 12-year-old named Will Byers, but the Duffer brothers used an interesting technique to increase their viewing audience: they cast sensational ’90s actress Winona Ryder as the child’s mother.

Ryder is an icon in our parents’ age group, who experienced pop culture as her hit movies were released. By casting her as a mother, the directors gave her a role that enables her to embrace her current age while drawing in audiences who saw her past successes.

Middle-aged viewers who are at a similar stage of their lives as Byers can grasp her unconditional love for her child. These viewers also classify as those who may not be typically inclined to watch a show centered around a gang of middle school kids.