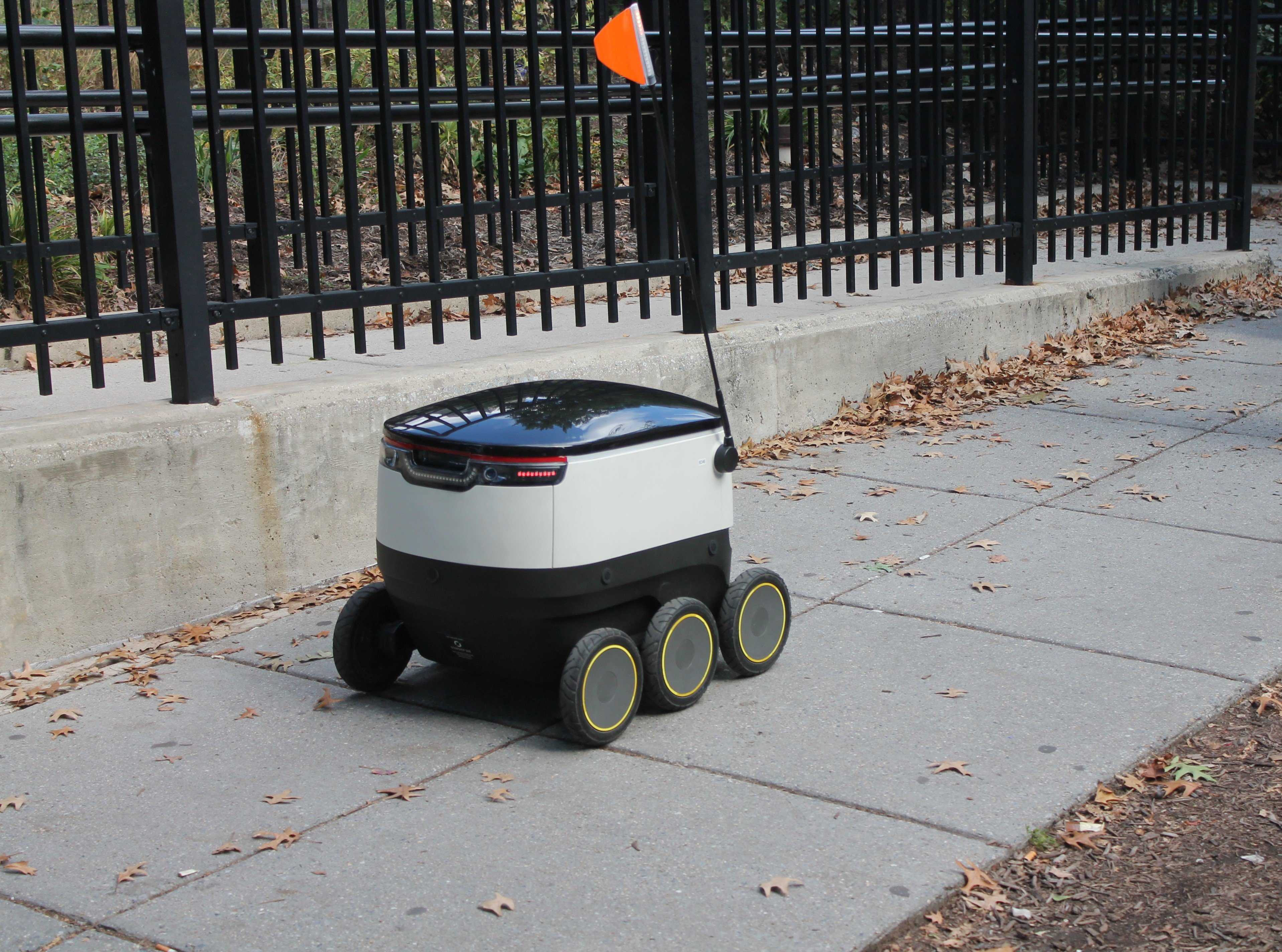 Get off my territory!” shouts a DoorDash delivery woman, while pointing at a six-wheeled robot that waits quietly in front of a restaurant. The robot remains dormant until a waitress comes out of the restaurant and places a hot meal box inside the robot. It proceeds to head towards its location, steering through neighborhoods and crossing bustling streets.

As portrayed by this footage in a Buzzfeed video last April, robots took another successful leap into the delivery industry after Amazon announced its drone shipping mission in 2013. Although Amazon’s plans have not yet been finalized, robots from alternate companies have started to be used for delivery.

Last March, robotics company Starship Technologies launched its nine-month Personal Delivery Devices (PDDs) pilot program to deliver food in Redwood City, Calif. The first of its kind in the U.S., PDDs can carry up to 20 pounds of food and travel as pedestrians up to 4 mph within a three-mile radius.

According to junior Grace Lam, who has built indoor delivery robots for robotics company NVIDIA, delivery robots are similar to self-driving vehicles. They operate through sensors and Artificial Intelligence (AI), which allows the robots to perceive and interpret their environment. Starship’s robots have an obstacle-detection mechanism, also called a situational awareness bubble, around it. Using nine cameras and ultrasonic sensors to detect obstacles, the robots will always come to a stop at a safe distance.

A report released by the Redwood City’s City Council said the use of the PDD will eliminate vehicles on the road, as PDDs travel on city sidewalks and therefore do not impede traffic. In addition, according to Starship, approximately 70 percent of people do not pay attention to the robots, and most of the remaining 30 percent is “overwhelmingly positive.”

“The majority of people are just ignoring [delivery robots]. It has become part of their normal environment.”

Due to the encouraging reactions from customers and pedestrians, Starship has begun to expand its robot delivery business to other parts of the U.S. and Europe. Additionally, the company has tested the PDDs in 100 cities from five countries around the world. In the Bay Area, PDDs operate commercially in Redwood City, Walnut Creek and Foster City. According to an email from Starship, the company is also expanding to other locations in the Bay Area, which may include Palo Alto in the near future.

The success of Starship Technologies has led to the creation of other similar start-up companies. According to Starship, there are currently eight other companies designing delivery robots, including Palo Alto robotics company Robby Technologies. Although Robby robots mostly are hand-made “rough-draft” models now, the company has already tested its robots multiple times around the Stanford campus and will soon cooperate with Instacart, a same-day grocery-delivery company.

According to Palo Alto City Council, Robby has already submitted a proposal along with several other robot delivery companies, though the Council has not released the exact date of discussing these proposals.

In order for delivery robots to acquire a “citizenship” in Palo Alto, they must comply with a set of pedestrian rules. According to an article published by Palo Alto Online, Palo Alto City Council requires delivery robot companies to obtain a permit from the Development Center and limit the PDDs’ speeds to under 2.4 miles per hour on sidewalks, also compliant with the Americans with Disabilities Act. Similar to Redwood City, Palo Alto will allow delivery robot companies to operate commercially on a pilot basis with a set expiration date.

Amid the rising popularity of delivery robots, concerns of robots stealing human jobs have risen among Doordash employees similar to the complaint of the delivery woman from the April 2017 Buzzfeed video. Because Starship robots will only charge $1 for deliveries in the U.S., delivery workers are afraid food delivery companies will replace human workforce by more efficient and cheaper robot service in the future.

“Anybody who sees a robot [starting] to automate part of their job [is] going to be really upset. Jobs aren’t anything to joke about, people depend on them for their livelihood.”

However, both Starship and Doordash claim that delivery robots will have no negative effects on the employment of delivery drivers, as Starship PDDs are only designated for short-distance deliveries.

“We think you will actually see a creation of jobs,” Starship said in a report. “Last mile delivery is the largest bottleneck in the growth of the e-commerce industry, especially local e-commerce such as groceries and food delivery. By removing this, we will provide a new lease of life to retailers, and therefore increasing deliveries from warehouses using trucks and vans.”

Although robots may not steal human jobs, the robots themselves can be stolen. These robots are vulnerable; thieves can pick them up or vandalize them easily. Also, the temptation to enjoy a free, delicious meal may be the driving force behind robot delivery thefts.

According to Henry Harris Burland, Vice President of Marketing at Starship, although over 4 million people have encountered a PDD on the street, there has been no record of burglary. However, Burland also pointed out that robot stealing or kidnapping will not be preventable as the robot population grows, as Starship envisions a future where thousands of robots run down the streets of thousands of cities.

To best combat robot thefts, Starship can accurately locate every robot’s position. Sirens will ring if someone picks it up, and there are nine cameras that provide a 360-degree view of the robot, so thefts will most likely get caught.

With a functional defense system, fleets of delivery robots are ready to join human pedestrians on the streets.

Just 18 years after Karl Friedrich Benz drove the first gasoline car in 1885, the Wright brothers invented the first airplane. With today’s much advanced technologies, how long would it take for these six-wheeled bots to fly up in the sky?

“Delivery robots are just one example of the innovations that society will adopt soon as a result of the fourth revolution,” Lam said. “I’m excited to see how our world will change in the next decade; AI is going to enable incredible changes in our society.”