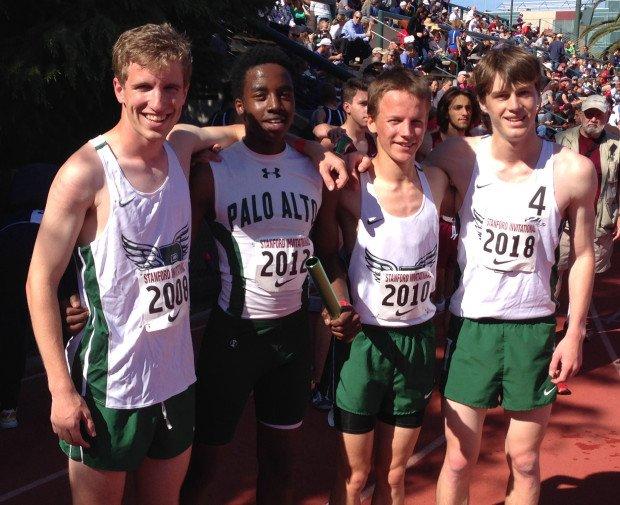 “I was 7 years old when people began telling me I should run track,” Kagiri said.“But all I wanted to do was play soccer because that was what everyone else did.”

Junior track and field  member Bryan Kagiri moved to America when he was 14. He joined the Paly track and field team when he moved to Palo Alto, but his passion for the sport goes back to his time living in Africa.

Kagiri was born in Nairobi, Kenya and lived there for six years. While growing up, he said he mainly focused on soccer and didn’t give track much thought until he moved to South Africa and saw his mother run for the first time.

“When I saw my mom run, I knew wanted to try track out,” Kagiri said.

Kagiri’s mom is a professional athlete, and received the silver medal for the 800m at the 2004 Athens Olympic games. Inspired by his mother’s accomplishments, Kagiri began running track. When he moved back to Kenya four years later, his interest in track only intensified.

“When I got back to Kenya, I began to run even more because I realized my talent, and it became my first priority,” Kagiri said.

When Kagiri moved to the United States, he said he wasn’t sure if he would keep running.

“I wasn’t sure if track and field was taken seriously at American high schools,” Kagiri said.

But he was invited  to Paly’s track team, and he immediately enjoyed it. He ran varsity as a sophomore, and excelled.

Last year, he ran a 400m in 49.31 seconds, which is only five seconds slower than the National Men’s High School record set by Darrell Robinson, with a time of 44.69 seconds. This year, he hopes to improve on his time and possibly beat Paly’s 400m record of a time of 47.65 seconds.

“I wouldn’t say beating the record is my goal, but it’s a great motivational tool to improve as a track sprinter,” Kagiri said.

Last year, Kagiri was part of the distance medley relay at the Stanford Invitational Meet as well as the anchor for the boys 4×400 relay. Kagiri has also participated in the Junior Olympics four times and plans on running in the event throughout his high school track career. In addition, Kagiri competed in the Arcadia National Meet against some of the best schools in the nation.

“The Arcadia meet in Los Angeles was a humbling experience for me. I realized that there are some great track sprinters that are better than me. That experience only pushed me to work harder so I can get better.”

Kagiri’s devotion to the sport of track has influenced his decision to continue running throughout his life.

“My goal is to make it as far as possible, maybe after high school to race at the collegiate level.”

Kagiri explained that though it will be tough, his highest goal is to make it the Olympics and follow in his mother’s footsteps.