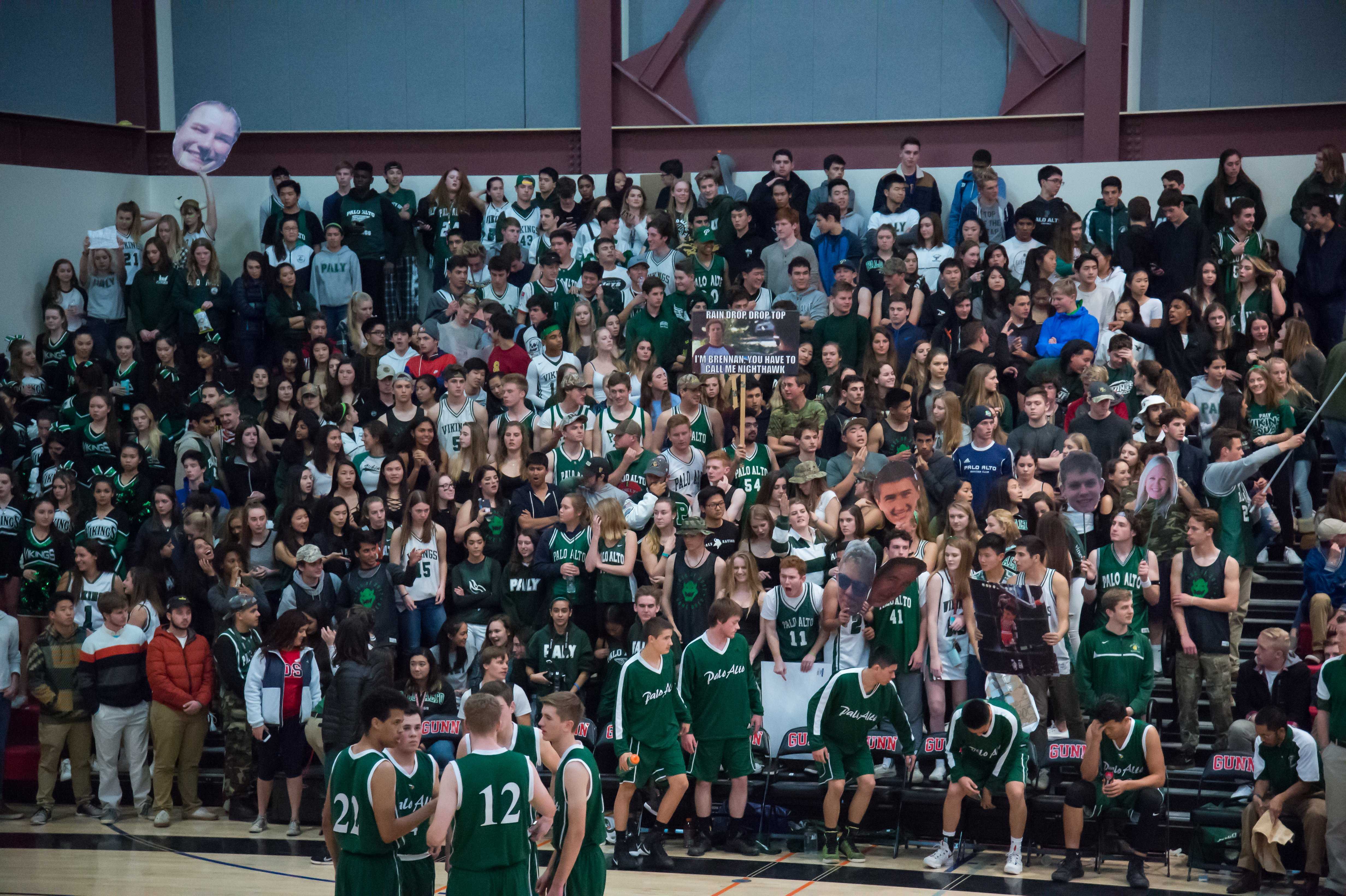 The moment before the serve, players are tense and crouched, ready to receive the ball. A single “Hoo” emerges from within the student section and echoes throughout the Peery Center. Senior Ahmed Ali chants as he claps his hands above his head. With each clap, others join in, intensifying the chant.

Announcing their presence on the court is Paly Sixth Man.

“For basketball, there’s five players on the court so the fan is oftentimes known as the ‘Sixth Man’ like the sixth player supporting the other five on the court,” said senior Matan Ziv, a member of Paly’s Sixth Man group.

The new group even has a  Facebook page, complete with a detailed description. “The Paly Sixth Man was established in 2015 with the intention of visiting as many sports games as possible, and supporting as many Vikings as possible outside of football. School pride required.”

Similar to local legend Super Fan Dan, Paly Sixth Man has gained themselves a similar large following of students. Many students at school know about the  Sixth Man phenomenon through the group’s social media promotion. With a heavy presence on both Instagram, Facebook and in the Peery Center stands, most Paly students are aware of the group’s existence to some degree.

“I don’t really know exactly who the Sixth Man group is but I know that it has a big presence on Paly campus and definitely hypes people up about sporting events,” said senior Tanay Krishna.

“I went to a couple away basketball games last year, and I started barrelling down and getting swept up in the sauce. We’re all Paly Vikes; we all want all the teams to do well. I think it’s great for anyone to come out. I really encourage it.”

With chants such as “Are you ready for the PA Vikes,” catchphrases such as “Finger Lickin Good,” FLG for short, and the iconic homemade axe, Paly Sixth fosters a sense of community among students, parents and players.

“I think [Sixth Man] is really good for the community,”  Ziv said. “People show up to the games, even if they’re not a die-hard fan that’s going to sit in the front row. Anybody can get behind it because we’re all Paly Vikes no matter our previous differences.”

Sixth Man isn’t the first group to refer to themselves and the crowd as the extra player of a sports team. The phrase was first coined by the University of Minnesota in the 1900s, where a magazine reported on the results of a football game, stating there was a “ mysterious influence of the 12th man on the team, the rooter … ”

Since then, the phrase has gained notoriety within popular culture. In fact, both Texas A&M football fans and Seattle Seahawks fans refer to themselves as “12s,” or “the 12th man.”

This similarity has led to dispute between the two teams, ending with the Seahawks being forced to pay Texas A&M $140,000 to use the trademarked phrase in 2016.

Creating memories that will last for a lifetime, Sixth Man’s dedication has spanned multiple generations of Paly students.

Paly Sixth Man has cemented their spirit at games as proud representatives of Paly’s unofficial cheerleaders.

“We’re in the stands, being the sixth man out there. We are repping out team, repping our school, repping our colors, all day every day.”