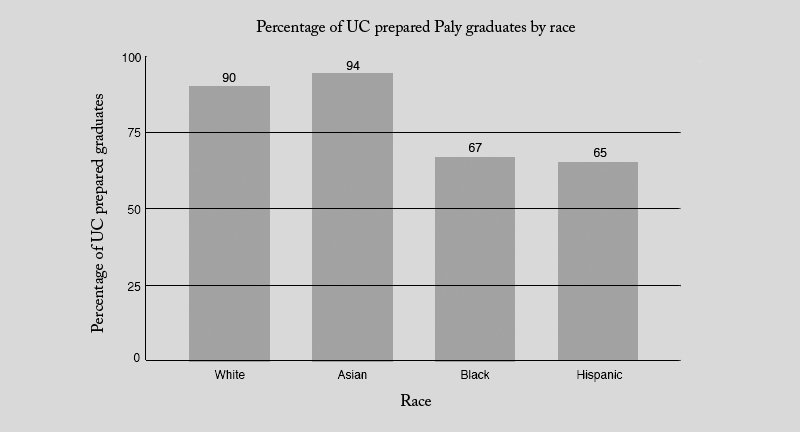 The District’s achievement gap, specifically the lack of college preparedness among African-American, Hispanic and low-income and special-education students, has made it to the recent Palo Alto Unified School District (PAUSD) school board agenda.

While graduation rates for many of these groups, especially African-Americans and Hispanics, are around the same level as those of others, the proportion of students that complete A-G requirements is significantly lower than their peers.

For example, according to district reports, while over 90 percent of African-American students graduate, only 67 percent of these students complete A-G requirements.

PAUSD’s achievement gap remains an unsolved issue for the District and nowhere is this gap wider than in regards to the completion of course requirements.

Moreover, while 82 percent of special education students graduate, less than half complete this coursework. This same gap also appears when considering the proportion of students who are considered prepared for life after high school.

According to the State of California, students are career-prepared and college-prepared when they receive their diploma and either meet A-G requirements, meet Smarter Balance test ELA and math standards or pass two Advanced Placement (AP) or International Baccalaureate (IB) tests.

Once again, many minority and special needs groups did not meet the standards, with only 22 percent, 32 percent and 18 percent of African-American, Hispanic and special needs students considered college or career-prepared.

The District has claimed poor academic planning as a major root factor in this discrepancy and vowed to work on fixing the issue, and will vote on a plan designed by Equality Coordinator Keith Wheeler later this month.

The plan has been designed in response to these findings.