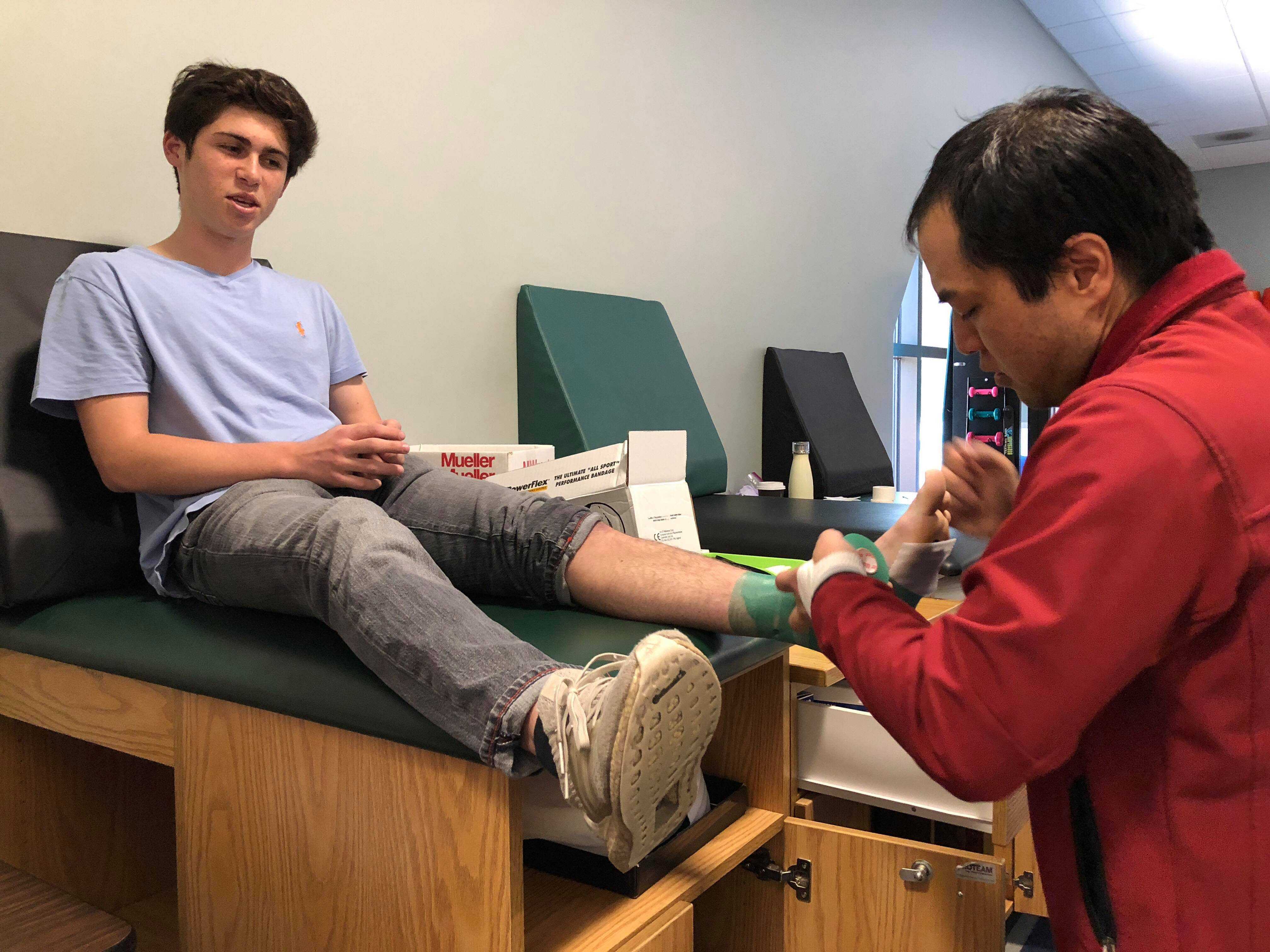 As the seventh period bell tolls, student-athletes flock to the athletic trainer’s office and file into a line to get their ankles wrapped and taped in preparation for their tiring practices and games. Athletic trainer Brien Arakaki quickly shreds a piece of athletic tape and places it taut on the athlete’s foot. Sweat dripping from his temples, Arakaki proceeds to bundle up the athlete’s foot and then asks who will be next.

Arakaki, one of the newest athletic trainers at Paly, he has had a long love for the intersection of sports and medicine. Arakaki truly realized his passion after playing hockey at Oxford University in England.

“Originally, I wanted to practice in the traditional medical facilities, but the problem was when I got to med school, I did my rotations, and it didn’t feel right.”

“It’s kind of like finding your right fit when it comes to selecting a college. I realized I really liked athletics, and I was an athlete myself — I was an ice hockey player and got into Oxford for a hockey scholarship. And then I fractured my hip and started to deal with Oxford’s physiotherapy” Arakaki said.

Varsity soccer player and junior Jonathan Maydan has been a beneficiary of Arakaki’s services and really appreciates it.

“I go every time before I play,” Maydan said. “I go for my Achilles. I injured it midway through the season. Now at this point it’s more preventative. I need to make sure that I don’t reinjure it. Initially, I thought it was just my Achilles that was injured, but he mentioned that from the injury, the bottom of my foot began to swell. He gave me other things to strengthen my Achilles.”

According to Maydan, he has learned more about his body and has become more aware of how muscles and bones interact after seeking help from Arakaki.

“I’ve learned more of how my body works and it’s really interesting when he tells me about the tape jobs,” Maydan said. “An Achilles injury, without treating it properly, could cause other injuries, like the swelling of the bottom of my foot. And I’d say he’s very good at his job.”

According to Arakaki, although he sees merit in traditional methods, he finds he is more progressive relative to other trainers and more holistic when evaluating athletes.

“I do believe in advancement, when I got my PhD, I really began to consider how the human body heals.”

“For example, the human body reacts differently to healing, gaining weight and losing weight. Some people progress really fast, so I don’t always stick to a timetable. It’s rewarding to see athletes’ hard work pay off. So if it’s gameday, I try to make my way onto the sidelines so I can be there if anything happens.”

Despite being at Paly since the beginning of the semester, Arakaki says he has not seen anything out of the ordinary yet.

“So far it’s mainly just a transition between sports, so a lot of students are experiencing shin splints,” Arakaki said. “It’s not really an injury, but it’s more of a progressive thing. But it’s mostly lower extremities. It’s mainly just freak accidents, like someone stepping wrong or falling awkwardly.”