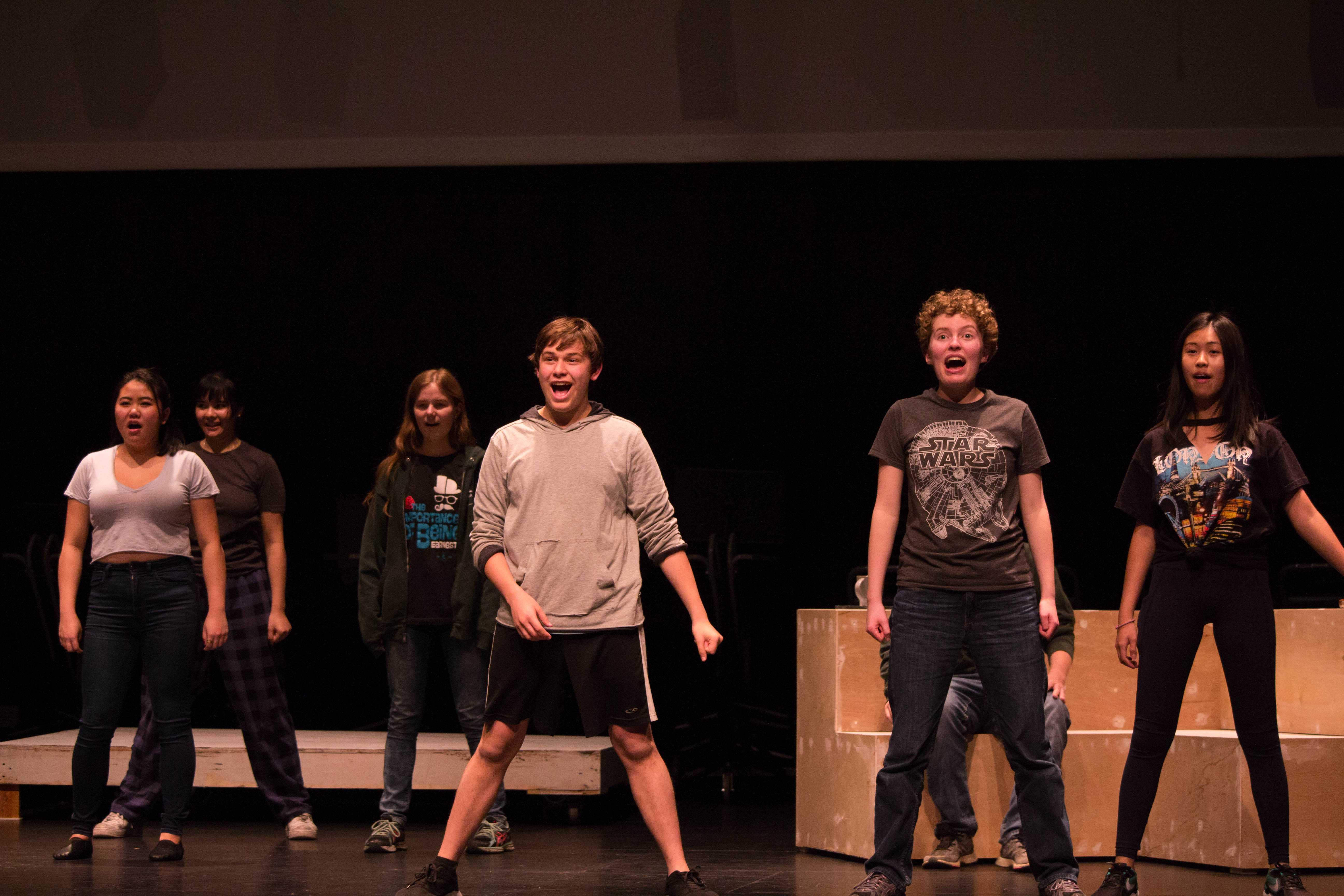 ‘Venture’ Musical to debut this month

Venture,” an original musical written by Paly choir director Michael Najar is opening next Friday and will tackle some of society’s biggest issues.

“Venture” is the second musical written by Najar to debut at Paly, the first being “Love Songs in Traffic”  in 2006.

“He had mentioned to me… two or three years ago, that he was doing a new musical,” said Kathleen Woods, Paly drama teacher and co-director of “Venture.”

Once Najar had the basic story and the ideas for the music, he and Woods started holding workshops. Students, theater professionals and parents listened to the musical and gave input. Najar incorporated this feedback as he developed the storyline and the structure of the script.

Najar drew inspiration for “Venture” from Marissa Meyer, the former CEO of Yahoo, who is a resident of Palo Alto.

“How many women are standing on the platform of a major company?” Najar said. “What she had to do to get there, that was a really compelling idea… I thought, ‘This is something that’s going to be great musical material, to ask these questions.’”

Najar cited one of his major influences for “Venture” as Andrew Lloyd Webber, who wrote musicals such as “Phantom of the Opera,” “Joseph and the Amazing Technicolor Dreamcoat” and “Cats.”

“[Webber is] a big influence on me because his music is odd, and I like things that are a little bit odd…  they have a lot of personality in them,” Najar said.

In “Venture,” Saira is the CEO of a company which goes bankrupt. She gets a new life-changing job at a prominent Silicon Valley company. However, there are many drawbacks, including that the CEO of the company is being investigated for sexual assault at the workplace.

In light of the recent controversy over sexual misconduct in the workplace, discussions about such harassment have become more relevant than ever.

“Harassment [has] been around since the dawn of time and gender politics,” Najar said. “But in the last six, nine months, it’s changed the way the musical’s headed, so we’ve had to do different things.”

Najar also said that he worked with female colleagues to ensure that the musical accurately depicted the challenges women face in the workplace.

“We talked about some of the concepts of the show. [They] had to do with contemporary, difficult issues, like the place of women in the marketplace and how this would play in a high school or as a mature show.”

According to Najar, the show has exceeded his expectations and his artistic vision. He was impressed with how students and other collaborators have made the show their own by adding new ideas. On a more technical level, the show will use a new projector that will make the musical “pop.”

“Maybe when it gets on stage, I’ll look differently on it,” Najar said, “but right now… characters are coming to life in a way that I never imagined. That’s a really neat thing.”

He partially attributes the success to his colleagues such as directors Woods and Meghan Hakes and Paly dance teacher Alyssa Bond, who have directed, choeographed and helped produce “Venture.”

Junior Gil Weissman, who plays Saira’s boyfriend, Brian, says that rehearsals for “Venture” have been more demanding than other productions.

“Because this is an original show, we have a lot more freedom and sort of work with the text and change it,” Weissman said.

There has also been more flexibility with other aspects of the show, such as transitions.

“This musical has a lot of set changes,” Woods said. “My co-director Meghan Hakes and I have developed most of that in the rehearsal process. It’s not formally in the script, but it’s part of keeping the show going and telling the story.”

“I think it’s really great that high school students get to work on original work,” Weissman said. “It’s something really special that’s unlike any sort of other theater production.”

“[‘Venture’] is so resonant right now in the Valley,” Woods added. “It just fits with our community, with the things we’re struggling with daily.”

“Venture” will open on March 9 and will also have performances on March 10, 15, 16, 17 and 18. Tickets are available at palytheatre.com. Also, after the opening night performance, the audience will be able to talk to the whole cast and crew.