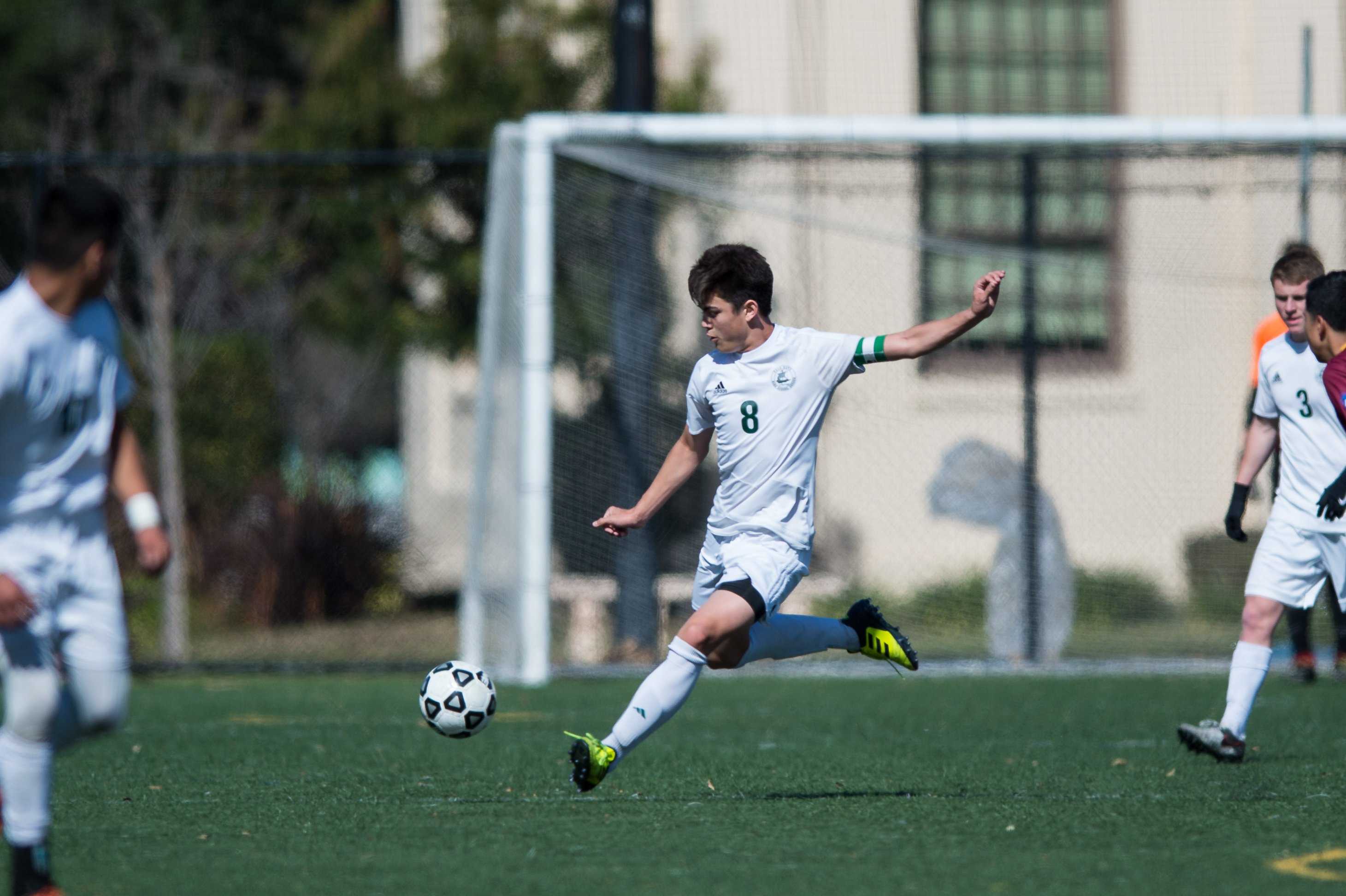 Boys soccer falls to Bellarmine Prep in Division I Semifinals

For the first time since 2009, boys varsity soccer made it to the semifinal round of CIF Central Coast Section (CCS) Division One playoffs. The team faced off against Bellarmine College Preparatory at Fremont on Feb. 27, but ultimately lost 2-1.

“I’m really proud of the team, and I think we left it all out on the field. After we scored our first goal, the momentum of the game changed, and I think if we had been a little more aggressive on offense the outcome might have been different.”

Team captain Matt Knowles was also proud of the team’s performance, but thought a lack of focus towards the end of the game was partly to blame for the loss.

Before semifinals, the team racked up a number of victories. It won a game against Santa Clara High School by a commanding 4-1 and tied with Homestead High School 2-2. Junior midfielder Kenzo Morabia said everyone, especially the team captains, contributed to their success.

Unfortunately, the team lost again to its biggest rival Los Gatos High School in a home game 2-0 on Feb. 9. According to Morabia, the team took the loss as a learning experience and has work to improve their performance in other games.

“Definitely, we were all irritated with the score of that game and we have tried to improve ever since,” Morabia said. “One thing that we have really practiced is just finishing. We all realized that we could have put a number of games to bed if we could have finished better. Coach has given us a number of finishing drills to make sure that we are clinical when we are in front of the goal. Besides finishing, we worked on possession as well. We felt that we weren’t controlling enough in some of our previous games.”

The team’s training clearly payed off, as they beat both Mountain View and Fremont High School 2-0 in separate conference games. The team’s training also played a big role in its win against Palo Alto rival Gunn in the CCS playoffs.

“I think our training has definitely reflected the way we played against Gunn as we dominated the midfield,” Morabia said. “Our entire team has displayed this kind of play, especially in the midfield with [midfielders] Xander [Sherer], Leyton [Ho] and Eric [Aboytes].”

In previous years, the varsity team was unable to get past the first round of CCS. Knowles said that part of the team’s success this year was the player’s ability to work together.

“In the past, I have noticed how the varsity teams did not work together, but instead, people tried to do everything themselves,” Knowles said. This did work out well and we couldn’t get past the first round of CCS. This year, I thought the team realized how well we played when we worked together.”

After its victory against Gunn, the team advanced to CCS quarter-finals against Menlo Atherton High School at home on Feb. 24. The team won 4-3, but one of its goalkeepers, senior Kiran Misner, was injured near the end of the game and was unable to participate in the semifinals.

“We scored in the last few minutes and then probably 30 seconds before the final whistle, Kiran got hit in the head and was carried away by an ambulance,” Morabia said. “He won us the game.”

“A lot of us were really in shock after the game,” Morabia said. “Mentally, we are going to miss his clever jokes and everything really. I’m sure he will be back as soon as possible but we will miss his dominating performances in the goal.”

With the season coming to a close, Knowles reflected on how the team has performed over the past few months.

“I think that as the season has progressed, we’ve found more players specific talent that they bring to the team and that has allowed us to mesh better as a unit.”

The junior varsity (JV) team won 3-0 against Santa Clara and tied 3-3 against Los Gatos in non conference games. It also lost 4-2 against Homestead and 5-0 against Mountain View in conference games. Despite losses, JV ended its season on a high note, beating Fremont 4-1. on Feb. 16.