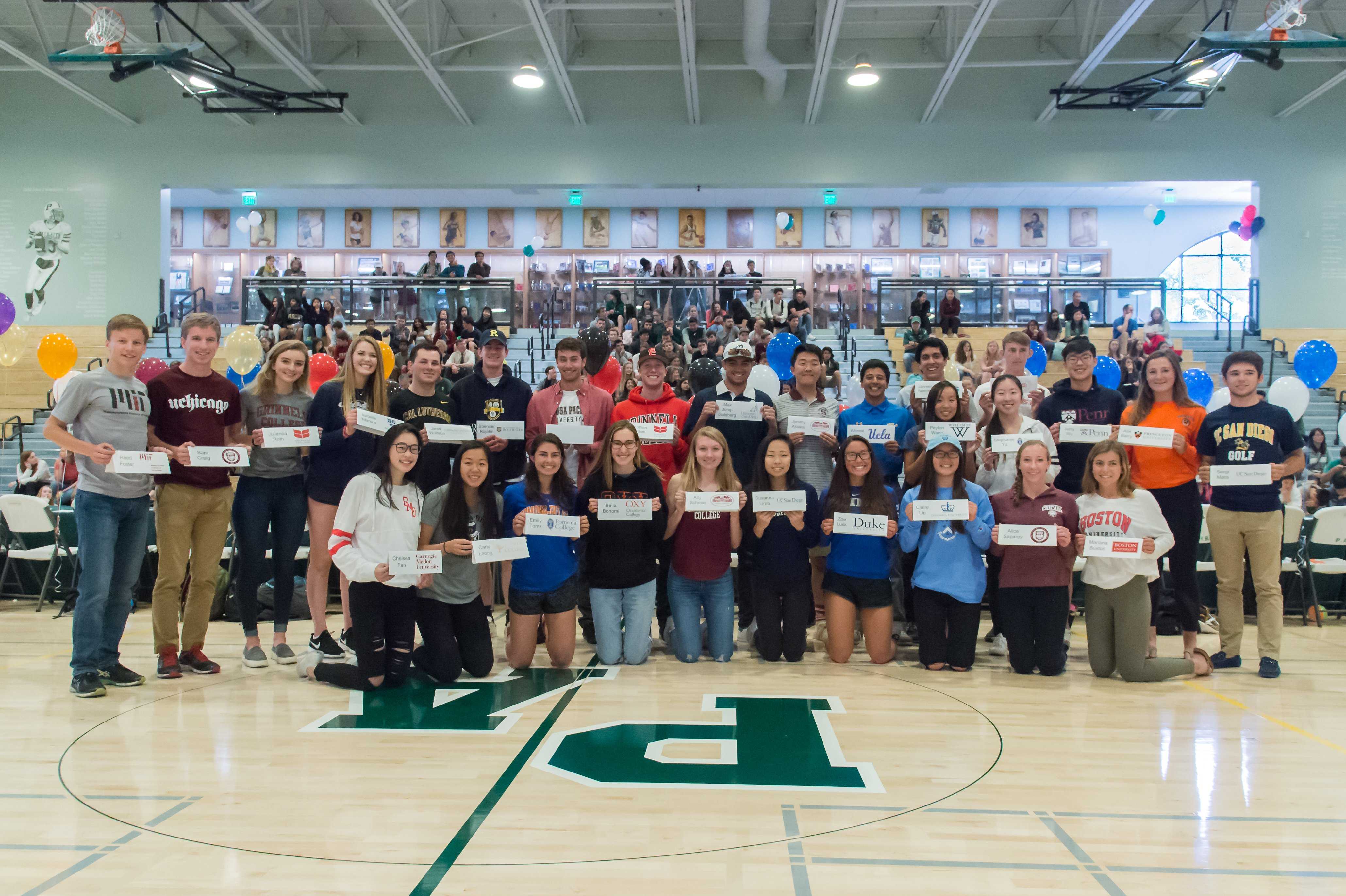 Twenty-nine Paly student athletes lined a row of tables in the Peery Family Center at lunch today, ready to sign a letter confirming their commitment to continuing their academic and athletic journey in college as part of the countrywide National Signing Day.

As the student athletes enter a new and highly competitive playing field, many are reflective of their years of hard work and excited to follow their passion and heighten their skills.

Senior Sam Craig, a track star who will be attending University of Chicago, commented on the multi-year challenge of striving to reach the collegiate level.

“As an athlete, I have improved a lot throughout my Paly career,” Craig said. “I’ve learned how to train harder and push my body to its limits and just be the best I can be.”

Paly girls varsity soccer team captain and senior Emily Tomz, who committed to Pomona College, discussed the excitement many athletes feel about continuing to play the sport they love at a more intense level.

“Playing soccer in college of course means playing at a higher and more competitive level, but it also simply means continuing the game I love. Not everyone gets the chance to play a sport in college, so I feel honored to have this opportunity.”

Although the rigorous recruitment process has come to an end, a number of now-committed student athletes had a stressful time while managing recruitment, school and social life. Senior Jerry Wu, an avid fencer and University of Pennsylvania commit, explained his struggle with the recruiting process.

“There was a period of time where I wasn’t doing as well as my peers,” Wu said. “I think I was thinking too much about the recruitment process at the time, so I just kind of let it go and really just tried to let go of all the pressure that was on me, and I think that helped a lot. It turned out pretty well in the end.”

Like Wu, Tomz also felt pressure while choosing her school given the significant impact of the decision on the next four years of her life and the fact that she is only a high school student.

“Trying to get recruited was like applying to college a few years early,” Tomz said. “Throughout [the process], I had to call and email coaches constantly, make highlight videos, go on visits, talk to players and ultimately make an earlier decision about my future, a decision that is hard enough at this age already.”

Although reaching the final stage of the recruitment process proved challenging at times, Tomz looks back at her experience with gratitude.

“Despite all its sucky moments, the recruiting process allowed me to really look at what I truly wanted in a college experience,” Tomz said. “I turned down some great schools, but in the end, I made the decision that I would still make if I were to repeat this process time and time again.”

In addition to playing in their rigorous sports, student athletes will face the growing challenge of balancing academic and athletic commitment. Athletic Director Therren Wilburn acknowledges this common struggle, but he has faith that their time at Paly has prepared most student athletes well.

“I know Paly is a rigorous academic school, so for [Paly athletes] to be able to get opportunities at the collegiate level, to be student athletes, that just shows how dedicated they are and their willingness to persevere in athletics,” Wilburn said. “I think that because they’ve come to a school like Paly, they’re going to be able to be very, very accomplished student athletes at the various institutions they are going to.”

The athletes who committed today were: