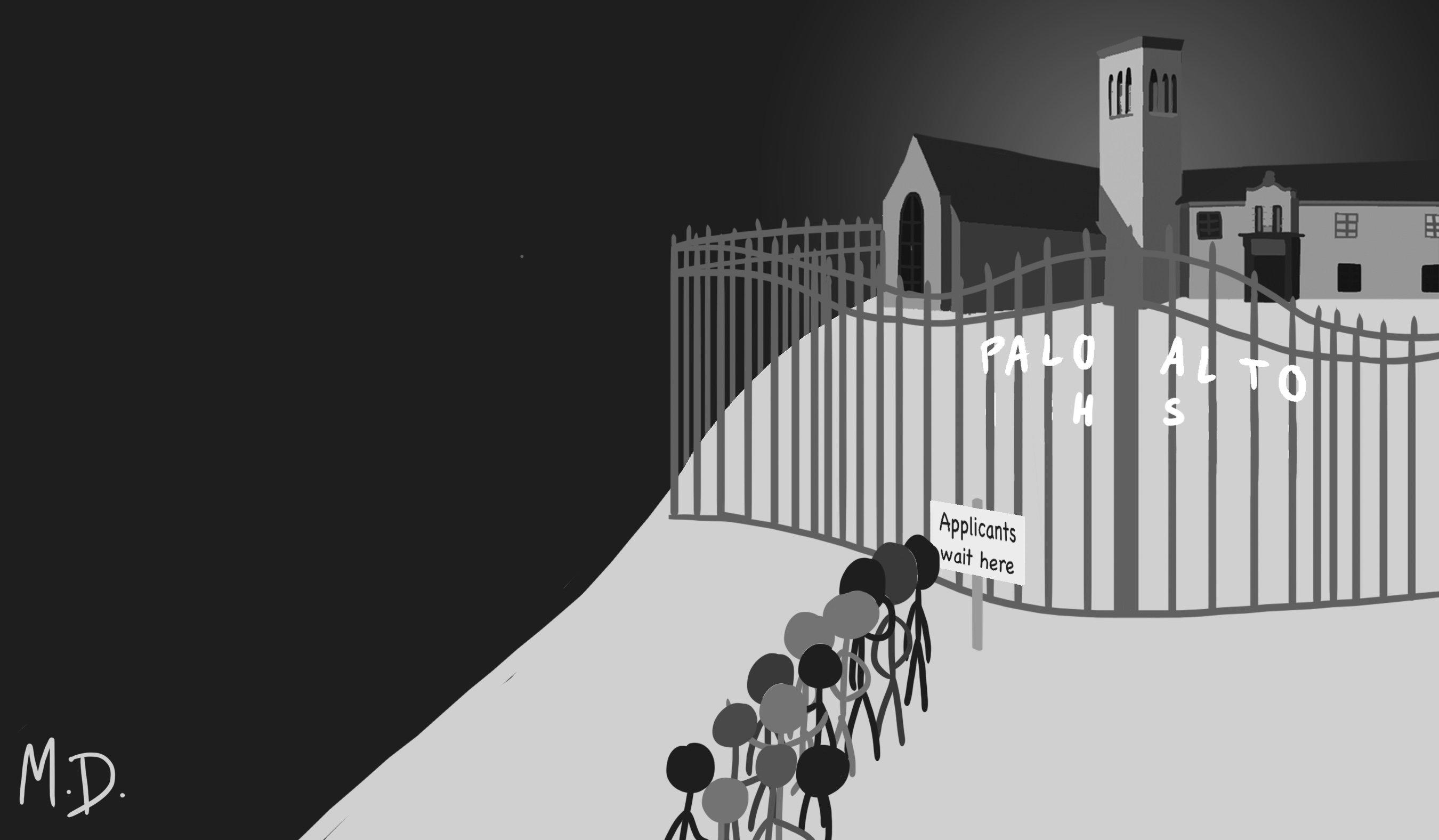 Paly should welcome more students from nearby cities

As one of the most fortunate high schools in the country, with extensive resources including vast funding and rigorous academics, Paly has a lot to offer. It should be open to sharing the qualities that make it such a prestigious school with residents of neighboring cities,  who otherwise are unable to access such opportunities.

Demographically, Paly is poorly integrated, and the issue is incredibly visible. According to a report published by the District regarding Paly’s demographics, our student body was merely 3.1 percent black and just 10.2 percent Hispanic or Latino during the 2016-17 school year, while 32.8 percent of Paly was Asian and 46.5 percent of Paly was white.

The fact that it took a 10-year lawsuit to allow students from neighboring cities like East Palo Alto to attend school in our district.

The fact the end result, known formally as the “Tinsley Voluntary Transfer Program” (VTP), is considered a “settlement” is appalling. It is seen as a compromise that was made because the push for the program was one-sided.

AP teachers must implement more preparatory work that is suggested by the College Board.

The lawsuit, filed by parents in 1976, claimed that elementary students in the South County area school districts were unable to obtain equal educational opportunities because of the confinement of racial minorities in the Ravenswood City School District, according to the San Mateo County Office of Education.

The lawsuit was settled in 1986 when the school districts entered a settlement order intended to reduce racial isolation.

A major perk of the settlement order is the VTP, which allows minority students in the Ravenswood City School District to transfer to one of seven districts included in the plan, one of which is Palo Alto Unified School District (PAUSD).

Surprisingly, the VTP students at Paly make up a great majority of the black, Hispanic and Latino population at our school.

The massive disparity between populations of Asian and white students and black, Hispanic and Latino students illustrates there are not enough students from neighboring cities being given the opportunity to attend Paly.

“I don’t necessarily know, unless I look up their address, which students are part of the [VTP]. I know people who are in the [VTP]. They’re not all underrepresented minorities, but absolutely the majority of them are.” said Social Justice Pathway teacher Eric Bloom. Furthermore, the VTP has many benefits to Paly in addition to diversifying a majority Caucasian and Asian school.

However, the most notable perk of this program is that it gives students who otherwise would not have the chance to attend such an illustrious school get the chance to do so.

“There are more opportunities and higher chances to succeed [at Paly]. Also, the funding is better at Paly which helps the students. I used to have straight Fs and Ds in middle school, but going to school in Palo Alto has helped me succeed in school with programs like AVID (Advancement Via Individual Determination), free tutoring and technology that is needed for school work. I feel like Paly should allow more students to come so there can be an equal chance for students to be able to get the chances that are not given at other schools.” said junior Chris Martinez, who attended elementary and a portion of middle school in East Palo Alto.

The VTP is a voluntary program in which parents and their children make the decision to get the possible opportunity to attend a Palo Alto school. They come here for a reason.  Therefore, there is no reason why a VTP or a transferred student would intentionally underachieve.

Yet many students still struggle academically, creating a large achievement gap between demographic groups at Paly. The idea of “stereotype threat,” popularized by University of California, Berkeley executive vice-chancellor and provost Claude Steele, is the idea that people in a minority group feel the need to conform to the mainstream stereotypes of their social group.

“Stereotype threat generally is this idea that if you’re a super-minority, meaning that you’re the only one in the room or one of three in the room. Anytime you talk about slavery, people look at you, or anytime you talk about Mexicans, they’re looking at you, and then you become the symbol but also the example of ‘that kind of student that’s a ton of psychological pressure and that’s been shown through research that it actually causes achievement to fall.” Bloom said.

While some VTP students are certainly able to assimilate the intense and competitive nature of Paly into their lives well and thrive when given the opportunity to attend our school, it has still become evident that many of these students suffer the fate of stereotype threat.

Therefore, by decreasing the extreme demographic gap here at Paly, we could decrease the achievement gap as well because minority groups would be better represented in the school and not face possible stereotype threats.

Though the District does work towards helping a fraction of disadvantaged students from neighboring cities, more can certainly be done to allow more students in greater numbers to attend our amazing school.

“The Tinsley Program is a gift to PAUSD. We are honored that so many families and students from East Palo Alto choose to embrace the opportunity to learn here and honor the commitment they make to their education.” interim Superintendent Karen Hendricks said.

If the District is truly so honored, it should expand the program and benefit the entire school in doing so.