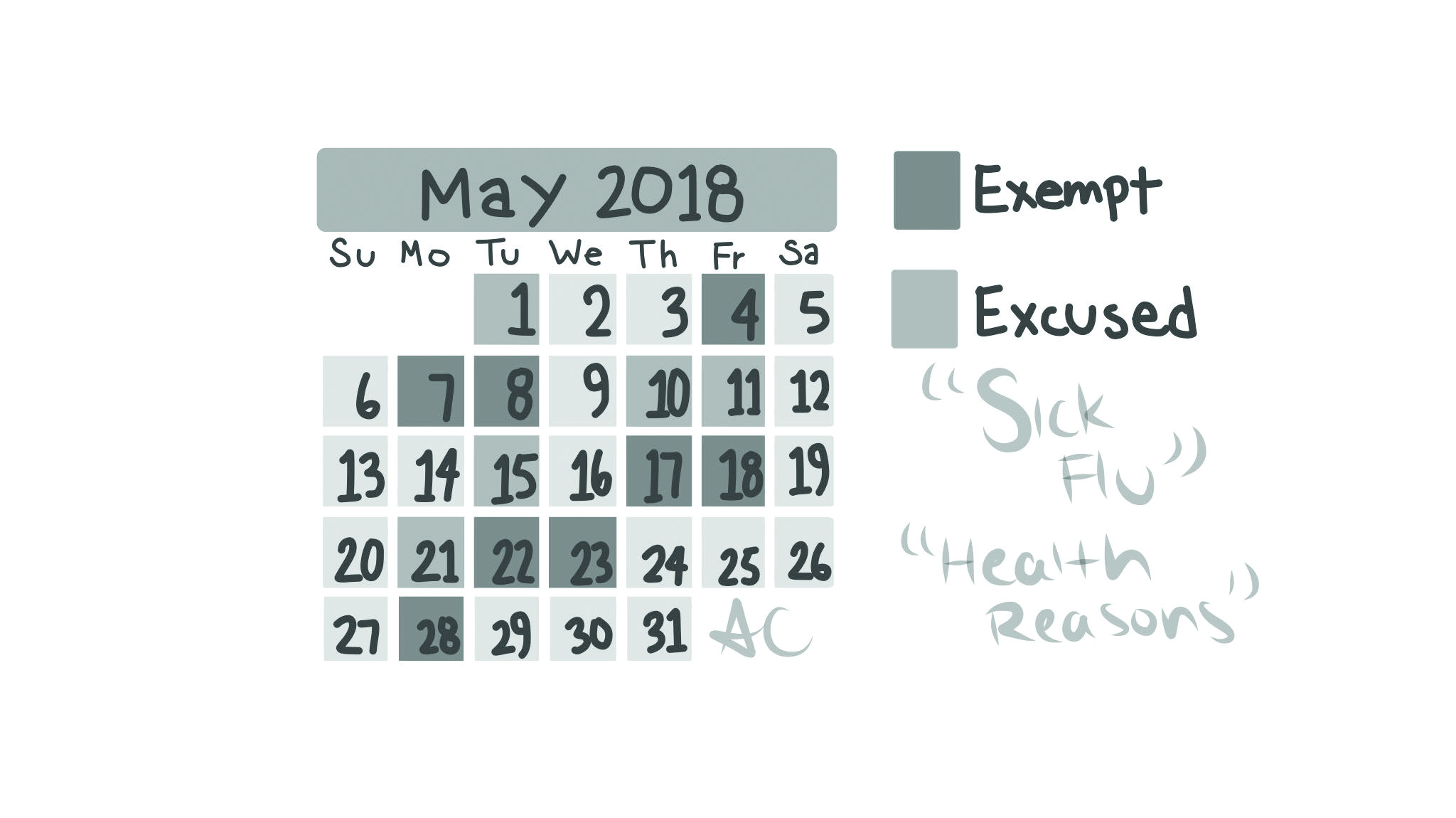 In a community where the pressures of competition are keenly felt, some students become desperate to boost their class standing and willing to sacrifice their morals for academic success.

Public school districts across the country face the problem of chronic student absenteeism, and top-ranked schools in Silicon Valley are no exception to this worrisome trend. However, Paly emerges as an anomaly compared to the rest of the nation. While chronic absenteeism is largely believed to be linked to low academic achievement, and accurately so, a growing demographic of frequently absent students have demonstrated quite the opposite.

Doctor’s appointments and sick days are common reasons students give to teachers for missing class; however, when a peculiar pattern emerges from students’ attendance records, these absences may suggest something more than annual hospital visits and flu season.

Despite the correlation found in school absences to high school dropout rates and course failures, absences here are often from students who load their plates with so much they have to skip class to catch up on other classes.

The habit of strategic cutting is common among many high-achieving students who are overwhelmed by their commitments, leading them to struggle with meeting test deadlines. These students often have parents willing to call them out of class on the day of high-stakes tests. Since public high schools, under law, cannot question the legitimacy of the “health reasons” parents present excusing their child from class, many students are able to skip a due date or exam they are not ready for.

This practice of dishonesty largely stems from the obsession both students and parents have about academic success.

However, as one of the many consequences of parents enabling their students, these students learn they can choose to not face their problems. Not only is this ideology potentially harmful to students’ post-high school lives, but it also takes advantage of other students who may have the same stacked test dates but do not have the luxury of parents who are willing to excuse them from class.

Student’s anxieties about maximizing their class ranking, not to their own satisfaction but relative to those around them, have also been heightened by the growing pressure to stay “competitive.” The PAUSD’s decision to implement weighted grades contributes too, creating a greater incentive for students to pack their schedule with honors and AP classes.

Some students are so fixated by their stats they have gone to the lengths of abusing mental health diagnosis to advance their own academic agendas. As an advocate of mental health, it is never my intention to put mental health on a lower pedestal than physical health. However, when the “fever” excuse doesn’t slide anymore, some students see mental health as something they  can use to their advantage.

By having a simple meeting with the guidance counselor, followed by filling out a brief assessment questionnaire, students can complete a request for a 504 plan, which provides qualified students with certain accommodations to ensure their academic success and access to learning.

These accommodations can range from prioritized seating in the front of the class for students with ADHD to extended time on tests for students with slow processing speed. Other factors used to help determine a student’s personal 504 plan are social or emotional issues such as panic attacks and anxiety.

Although the majority of students on 504 plans have legitimate needs and use the program respectfully, I know of a growing number of students applying for 504s with less honest intentions. Knowing that a 504 can offer extended time for due dates and exams, some students nominate themselves and manipulate their responses to the questionnaire to receive these accommodations.

This practice of dishonesty goes against every stereotype mental health advocates have worked so hard to dispel, and perpetuates the misconception that mental illness is an all-encompassing scapegoat.

The misuse of 504 plans is not only unjust but also jeopardizes the utility of a 504 plan, as students who actually need accommodations may have a harder time getting them now.

As much as I would like to conclude with a panacea for the fundamental flaw in the district’s climate, this culture of dishonesty is a systematic problem that may not see a solution in our lifetime. However, the first steps we must take is to talk about these acts of dishonesty that many are reluctant to admit exist, and confront the reality of the culture we have cultivated. It’s been nearly four years since I moved into the PAUSD and if there’s one thing I’ve learned, it’s learning to play the game because everyone else seems to be.