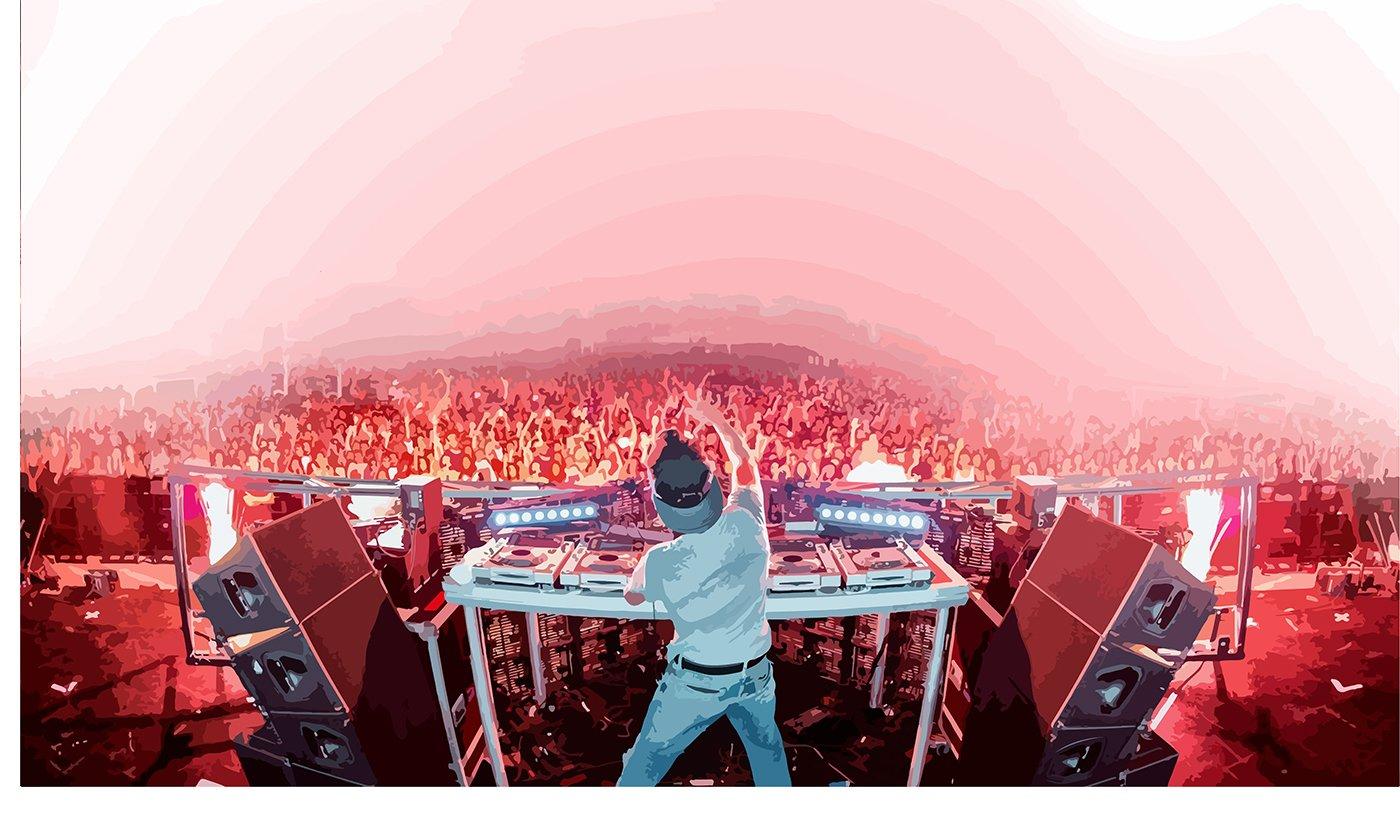 The Legacy of Avicii

With his right arm raised high and a pair of headphones around his neck, Tim Bergling, also known as Avicii, entered the stage with the sound of  thousands of screaming fans at his last concert on Aug. 28, 2016 in Ibiza, Spain.

To the outside world, the Swedish DJ looked to be living a god-like life, but, unknown to all, on the inside, Bergling was on the brink of destruction.

“The first four, five years, everything was awesome because you get a kick out of it. [It felt] as if you were jumping out of a plane; you are playing with the feeling of almost dying.”

Avicii, in a 2017 interview for his documentary “Avicii: True Stories”

Bergling grew up in Stockholm, the capital of Sweden. He lived and went to school within the same five-block radius until the age of 19.

From an early age, Bergling said he knew when he grew up, he wanted to make a living doing something creative.

Bergling’s life changed forever the day his childhood friend showed him a simple production application named “FL Studios.” He began to produce beats together with his friends in his small Stockholm apartment.

“We always met around noon,” said DJ Otto Knows, Avicii’s now-famous childhood friend. “Then, when I would look at the clock, it would be 1 a.m. I would say, ‘Maybe we should see each other again tomorrow and continue.’ But then, he would say, ‘What? No, it’s better to finish this song now and write another one tomorrow.’”

Even at a young age, Bergling had an incredibly strong work ethic. He would grind out song after song and send his material to various blogs, asking to be featured.

“He worked during the night, basically,” Knows said. “Then, when he had to sleep, he often walked up to the roof and slept in the sun. And he was like, ‘Yeah, it’s so smart, because now I get to sleep and I get a tan at the same time.’  Then, he would go back to work.”

In May 2008, Avicii was approached by promoter Ash Pournouri. The two started working together, and Pournouri took on the role of Avicii’s manager.

After several remixes of famous songs, Bergling started to break out within the electronic dance music (EDM) community.

His first show was in Miami at Laidback Luke’s Super You & Me party. Laidback Luke describes him as being a “shy, laidback kid who was so nervous.” He opened the night for three people, but by the end of the night he attracted plenty of attention. Avicii continued playing at small clubs until his early songs “Alcoholic” and “Bromance” started garnering commercial attention.

His breakout hit, “Levels,” spread into the mainstream in 2013. This marked the beginning of Avicii as a cultural force. He started getting recognized at shows, and Avicii remembered hearing the crowd sing along to all his songs for the very first time.

“With ‘Levels,’ everything just kind of took off,” Avicii said. “We  [Avicii and his team] got these opportunities that we had never been presented with before. [For example,] headlining Ultra [a music festival] was a dream come true.”

At his first ever headliner, a surprise guest showed up. Madonna, the “Queen of Pop,” sharing the stage with a DJ at an EDM festival was unprecedented.

The following years of Avicii’s career went by in a blur. Between 2008 and 2012, he played a staggering 550 shows. “Wake Me Up” was Avicii’s next worldwide hit. He was now becoming a star of astronomical magnitude. However, the young Swede was still dealing with his shyness and had difficulty performing in front of a live crowd.

“I realized how stiff I was,” Avicii said. “I found the magical cure: just having a couple of drinks before com[ing] on the stage. “That’s what helped me do all of those shows without becoming completely exhausted.”

Avicii’s new habits didn’t come without side effects. In 2013, Avicii had to cancel several shows in Australia due to stomach complications. The DJ was hospitalized and diagnosed with pancreatitis.

“It is the worst stomach cramp you can imagine,” Avicii said. “It feels like someone is stabbing you in the stomach and the back simultaneously. For me, [it was] definitely the most pain I have been in. You can’t really do anything about it; you just need to not drink water and not eat.”

Still Avicii felt forced to attend promotions and continue with his heavy touring schedule. At the end of 2013, he had played at 657 shows since 2008.

Despite all the pressure, the one thing that brought Avicii true happiness was creating music. He continued working hard in the studio and collaborated with different artists from around the world.

“Tim, similar to Michael Jackson, had the actual symphony living in his entire head,” said rapper Wyclef Jean in an interview about working with Avicii. “He is doing this as Bach did what he did. I do think that there is something that we are missing. The fact that we are making a separation between DJs and musicians. [To me], Tim is a hard-core music theorist, and that’s what makes a great composer.”

Avicii went on to win the American Music Award (AMA) in 2013 for favorite EDM artist, and for a short time he felt as if he had recovered from his illness. He stopped taking all pain medications and flew to Miami to perform at the Ultra Festival.

However, while in Miami, he ruptured his appendix and gallbladder, and his doctors urged him to try even heavier pain medication. Bergling questioned if it was necessary to try medication like Percocet, but he succumbed to the pressure of the doctors and his team.

In a radio interview conducted around that time, Bergling was asked about what it is like to be Avicii. He responded by saying, “It’s weird. I mean, obviously I am Avicii, but then, at the same time, people’s perception about who Avicii is isn’t who Tim is. I am a little bit shy, [and I] don’t like to be at the center of attention.”

Despite not ever wanting to be the “center of attention,” Avicii had become one of the world’s biggest stars. He saw other artists managing the lifestyle, but, despite seemingly having all the boxes checked, he wasn’t happy.

Instead of taking a few months off and recovering, Avicii kept going. At the end of 2014, Avicii had played at 725 shows.

“Time went on, and I didn’t feel better,” Avicii said. “[Shows] kept happening, even though I went into periods where I was taking care of myself. There was never an end of shows.”

Even though he played at hundreds of concerts, Avicii still felt stressed and anxious every night before coming on the stage. In 2016, Avicii finally listened to his own body and decided to quit touring, writing a statement that he planned to release to his fans.

Avicii desperately wanted to release the statement, but those around him told him that it might not be the right time. In the end, Avicii finally got what he wanted and announced that he would stop touring.

“I felt s—–,” Bergling said. “I felt terrible because I saw how happy all the fans are, [but] I don’t f—— like it. I am standing up there and I have to pretend that I like something that I don’t like doing. After that I said ‘f— I’m gonna quit.’”

Despite officially quitting touring and desperately wanting to rest, Bergling still had to finish the rest of the tours in 2016.

Although he stopped touring nearly two years before his death, Bergling was never able to find the true happiness that he was looking for.

He needed to find himself again, but the pressure that he had been put under by so many around him during the eight years when he was touring had been too much to handle for someone who never wanted to be the center of attention in the first place.

Nevertheless, Avicii’s legacy spans well beyond his 11 billion online streams. He was a pioneer of EDM and brought it into mainstream culture like no one before him ever could.

He was an inspiration to young people all over the world, showing that those who are willing to work for their goals can achieve anything, and is one of Sweden’s greatest musicians. What will ultimately define Bergling’s legacy is his genuine, kind-hearted personality. His sincere intentions of producing music in order to provide an outlet for his creativity led to his immense success. His music will continue to live on long after him, and we are lucky to have experienced his musical genius while he was still creating his art.