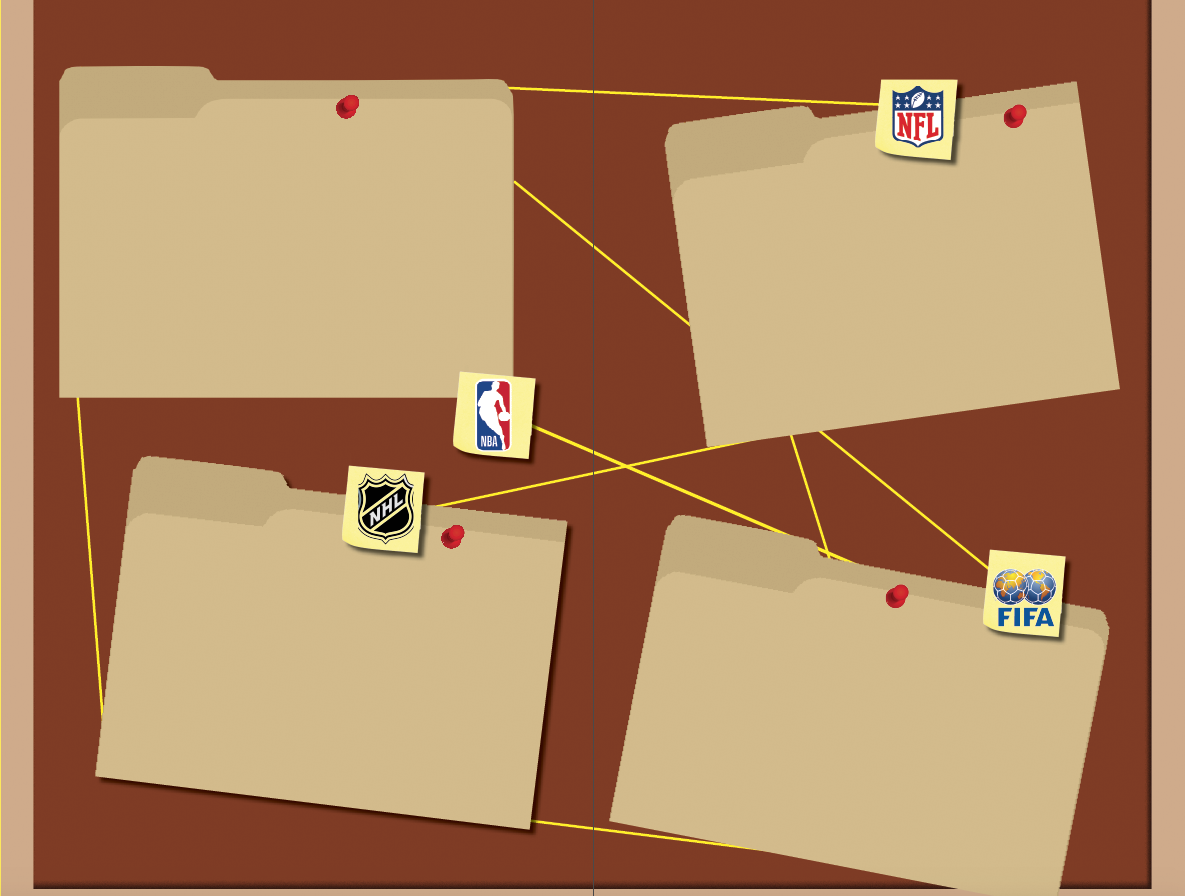 The Fraudulent Files: Unraveling the biggest conspiracies in sports

It’s spring of 2002, and the National Basketball Association (NBA) playoffs have yet to begin, but the tension of postseason basketball has started. Seemingly forgetting his position as commissioner, the head of the NBA at the time, of the NBA David Stern declared his dream NBA final as “the [Los Angeles] Lakers vs the [Los Angeles] Lakers.” His comments were initially brushed off, but just a few weeks laters, fans were forced to ponder the legitimacy of the NBA in what remains one of the biggest conspiracies in not only basketball but sports in general.

The 2002 Lakers vs Sacramento Kings Western Conference finals series was quite possibly one of the greatest postseason series of the century. The storyline of stars Kobe Bryant and Shaquille O’Neal repeating as champions dominated headlines, while fans and media wondered whether the Sacramento Kings, led by Chris Webber, deserved the two seed.

The teams battled for a place in the coveted NBA Finals and the first five games were, quite simply, a dog-fight. Neither team dominated, and instead the winning team had to capitalize on the small mistakes of their opponent and convert shots late in the game to emerge victorious. After the first five games, the Sacramento Kings had worked their way to a narrow 3-2 series lead, needing just one win in the remaining two games to compete in the championship.

With nothing to lose in this specific game but the game itself, the Kings came out as a fierce, strong and cohesive unit. Throughout the first three quarters, they dominated the game and many thought they were well on their way to upsetting the Lakers and knocking  superstars Bryant and O’Neal out of the playoffs.

Media and fans across the world accused the NBA of being rigged. Former playoff referee Tim Donaghy blamed the NBA in a scathing report, pointing out evidence for match fixing. Apart from the vast disparity at the free throw line, Donaghy noticed that the Lakers winning would help the NBA’s business; the series advancing to a Game 7 would get better television ratings and make the NBA more money. Donaghy, an insider on the NBA’s relationship with referees, also asserted that the NBA would tell referees to put the league’s best interest as a top priority, furthering the case that the league fixed Game 6 to get the Lakers to the final.

A series eventually convoluted by bad officiating and a belief that the NBA was rigged, the Sacramento Kings vs L.A. Lakers historical seven games are a fundamental argument as to why sports are rigged, a discussion basketball aficionados are still having. One must ask oneself whether the NBA is truly a sport for the fans or a business organization willing to compromise the integrity of the game for money?

During the turn of the century, the Oakland Raiders were America’s team. After a long stint in Los Angeles, the team had come back to its city of origin, revitalizing the team’s former “bad boy” image in the 1970s and 1980s. In contrast to the neighboring football team San Francisco 49ers, the Raiders aligned themselves with Oakland’s working-class and underdog mentality, while also maintaining popularity in Southern California.

In 2001, the Raiders were en route to winning their fourth championship in franchise history, having just acquired Hall of Fame receiver Jerry Rice in the offseason. During the American Football Conference Divisional Playoff Game, the Raiders faced the New England Patriots, a team that usually dominated the regular season, but were without starting quarterback Drew Bledsoe.

The game was played in heavy snowfall in Foxborough Stadium, a dated arena that was soon abandoned. Both teams struggled under the rough conditions and therefore both were unable to scored effectively. With 110 seconds left in the game, the Raiders were up 16-13 and were poised to punch their ticket to the Superbowl.

In the Patriot’s next possession, cornerback Charles Woodson hit back up quarterback Tom Brady, leading him to lose control of the ball. However, instead of a fumble, the call was ruled an incomplete pass, as Brady “tucked” the ball into his body before dropping it. The Patriots later tied the game through a field goal on the same drive and won the game in overtime. This call was eventually formalized by the league, dubbed the “Tuck Rule,” has generated extensive controversy due to the nature of its creation and quickly became one of the most hotly debated topic in professional sports. The Patriots eventually won the Superbowl in 2001, starting one of the greatest dynasties in football.

As with many sports controversies, many believe this call was made for gambling reasons or the referees were paid by the Patriots franchise. Pundits also believe that this call was also made for by other teams in the NFL in fear that with another Superbowl title, the Raiders would eclipse the popularity of every other franchise, especially the Dallas Cowboys, a team that gained national fame during its 1990s championship runs.

The Pittsburgh Penguins have been one of the most storied franchises in all of professional sports for the past decade, but it wasn’t too long ago when the Penguins were among the laughing stock of the National Hockey League (NHL). After all-time-great Mario Lemieux retired, the Penguins suffered the worst attendance in the league due to lackluster teams and threatened to move to another city.

The franchise has always suffered a myriad of financial problems and owed $90 million to various creditors due to irresponsible spending in the 1990s, leading the Penguins to file for bankruptcy in 2000. On top of this, its abysmal record made the team unappealing to fans, and its history of not paying players has harmed the team in free agency.

The 2004-2005 NHL lockout magnified each the Penguin’s financial troubles as players began to reinvigorate their dispute about their wages. The Penguins threatened to move away from Pittsburgh despite their long history and past success as they simply could not afford to stay in their original city.

Enter Sidney Crosby: one of the most hyped up prospects ever and dubbed “The Next One” despite never playing a second of professional hockey. His pre-draft accolades were astounding: he dominated a 17-year-old league despite being 13-years-old and led the Quebec  Major Hockey League (QMJHL) in points during both years he played in the league. The 2005 draft was collectively regarded as the Sidney Crosby sweepstakes, as the winner of the  first pick of the draft was able to walk away with a generational talent.

On most drafts, teams are able to draft in an order opposite to their league record. However, due to the lockout, there was no record to base this order on. In accordance, the NHL set up a lottery based on each team’s performance on the past few years to determine a draft order.

The first overall pick ended up in the Pittsburgh Penguins’ hands and the team immediately climbed its way out of obscurity, eventually winning a league best four championships in the next 12 years and becoming the most successful hockey team of the past decade.

Many speculate the NHL rigged the draft in order to keep the Penguins in Pittsburgh. With a generational talent like Crosby, the NHL was not only able to keep the team in their city of origin, but also propel the team into financial security due to rapidly increasing popularity and jersey sales. Without the NHL’s assistance, the Penguins might have moved by the end of 2005, and another team, that would have been able to draft Crosby, would experience the copious amounts of success instead of the Penguins.

Soccer, often referred to as “the world’s most beautiful game,” is widely known as the people’s sport. Every day, millions around the world play and watch the game and look to professionals as idols. They wait for the weekend and wake up early in the morning to watch their favorite teams compete on the pitch.

Yet, with multiple scandals in the head governing body of soccer, Fédération Internationale de Football Association (FIFA), it seems as if the sport may be one of the biggest examples of match-fixing ever.

In 2015, questions of corruption and match fixing surrounded the organization, putting the governing body in a crisis. Through an investigation by the Federal Bureau of Investigation (FBI) on the possible corruption of American banks, the U.S. was able to indict 30 FIFA officials on charges of corruption. Among these charges were embezzling money from the organization into personal bank accounts, rampant bribery and fraudulent payments to governing officials.

These allegations come on top of claims against FIFA for bribery during the World Cup bidding, which determines which country hosts the competition. When Qatar, a country not heavily involved in the soccer world, was chosen for the 2022 World Cup, further questions about FIFA’s corruption were raised. In fact, a German newspaper found a report which officially found Qatar and an unnamed FIFA official of bribery to the amount of $2 million to the official’s 10-year-old daughter.

FIFA’s corruption happens both on and off the pitch, even at the highest level. In Seria A, the elite Italian soccer league, powerhouses Juventus, Lazio, Milan, Fiorentina and midtier club Reggina were found to be match fixing. Instead of allowing fair play throughout the 2005-2006 league campaign, the head of the Italian soccer organization discovered that the teams were hiring referees that would favor them over their opponents.

The teams were punished the following season, with Juventus relegated to the second league, while Milan started the next season down 30 points from other Italian teams in Serie A and Reginna and Fiorentina not allowed to play in European games. Despite being punished, the match fixing in the Italian league illustrates the severity and corruption in FIFA and sports as a whole.