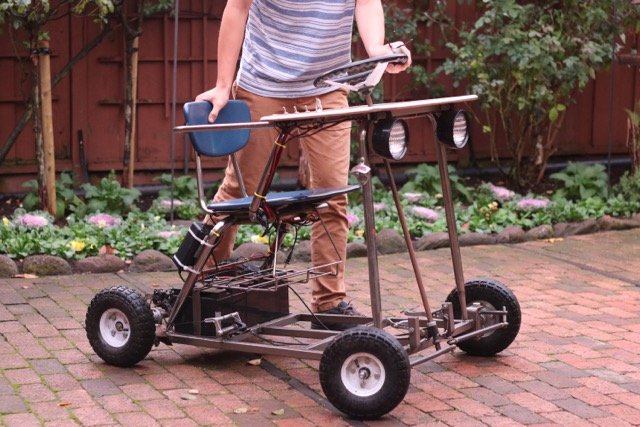 Several Paly student Makers will exhibit their creations at the annual Maker Faire at the San Mateo County Events Center from May 18 through May 20. The Paly Robotics team will also demonstrate the robot it built for its past season at the event.

Maker Faire is a conglomerate of aspects of both science and county fairs — a showcase of invention, creativity and resourcefulness. Thousands of people attend this celebration of the Maker Movement, a do-it-yourself community influenced by technology. Ranging from science enthusiasts to food artisans, participants share their knowledge and inspire each other.

Paly sophomore Lawrence Chang and juniors Peter Martin and Nathan Kim, the leaders of the Paly Electric Vehicles Club, are demonstrating the vehicles they have built and modified over the past couple of years. All three are passionate and experienced Makers who express themselves through their projects.

“I find that making [projects] gives me a lot of freedom; freedom to manipulate and do interesting things in the physical world,” Chang said. “Using [my] hands to do stuff at a young age was always quite intuitive. As I learned more, met more people and gained access to more resources, my interest and capacity to make things grew as well.”

Chang, Kim and Martin are demonstrating their homemade vehicles and models — including a desk go-kart and an electric bike — at their “Student Drivers” booth, located in Zone 9 Eastside at the Faire.

“We [were] all inspired by our laziness and reluctance to spend effort when commuting to school,” Chang said.

This proved an effective and motivating method for the Makers to begin planning their project.

“The idea came up to make the desk kart freshman year one day as a joke,” Kim said. “It was crazy enough to be interesting, so Peter and I spent some time thinking of theoretical designs and parts lists. After giving the concept a little more thought, we determined it to be a feasible idea, so we went out and built it.”

According to Martin, the project took roughly a semester’s worth of weekends during their freshman year to complete. The desk go-kart was built by welding a steel frame onto an old desk, as well as attaching an axle, wheels, an electric motor and batteries.

On the other hand, Chang began working on his mid-drive electric bike last summer with only a completely 3D-printed motor mount, batteries and a motor controller.

“The benefits of rapid prototyping and the ability to make complex parts, like the motor mount for the bike, was indispensable for this process,” Chang said.

However, as the mount later started to fail due to wear and tear, Chang decided to make custom battery packs, a project he is still iterating on.

Throughout the process of creating their vehicles, Chang, Kim and Martin were all faced with various obstacles and challenges they had to overcome, including aspects regarding funding and time.

“The most challenging part of the process … in my opinion, is time,” Kim said. “Being busy [as] a high schooler, it was, and still is, difficult to find enough time to execute the project.”

Mapping out the project from start to finish, especially considering capabilities, materials and knowledge also proved to be difficult.

Initially, Chang struggled with wrapping his mind around the whole concept.

“That is always the biggest hurdle for anything I do — just formulating an achievable goal and mapping out an achievable plan,” Chang said. “There are always hurdles and unforeseen things that need to be worked out — that’s inevitable — but it’s the things you already see coming and [the process of] trying figure out how to get around those things … that is the most taxing for me.”

Despite the numerous challenges, months of effort and iterations each project took before arriving at a final product, Chang, Kim and Martin learned invaluable skills throughout their journeys.

“For any project, you learn so much more than what it appears to be [on] the surface,” Chang said. “You learn to talk to people, negotiate with companies, ask for advice, work with people, bargain for prices, source parts from manufacturers, sell goods on eBay to fund your projects and lead other people who are also enthusiastic about these [projects], all while expanding [your] technical knowledge.”

In addition to these three Paly Makers, Paly Robotics will also be demonstrating their robot at Maker Faire.

The team participates in the For Inspiration and Recognition of Science and Technology (FIRST) Robotics Competition (FRC), and has six weeks each year to design and build a game-playing robot.

This year’s game challenge, “FIRST Power Up,” involved three teams forming an alliance and competing against other alliances to place cubes on teeter-totter structures and climb on a rung to score points. Paly Robotics’ robot focused on placing cubes on the six foot tall “scale,” with a multi-stage elevator mechanism. The team plans on coordinating a mini-version of this game with other robotics teams attending Maker Faire.

“Building the robot this year was definitely a challenge for the whole team as we decided to pursue a multitude of new [mechanisms]. The process of ideating, creating and iterating throughout the whole build and competition seasons was tough, [especially for] the elevator, but utilizing knowledge and experience from past years, along with research, has allowed the robot and team to be highly regarded by many world-class teams.”

Sophomore Nicole Lavosky, a member of Paly Robotics, is organizing the team’s demonstration at Maker Faire this year.

“[I thought] it would be cool to demo our robot [at the Maker Faire] because a lot of tech enthusiasts go there so it’s a relevant audience,” Lazovsky said. “The people that attend the Faire share a particular interest in STEAM [Science, Technology, Engineering, Art and Math] and creation, which connects to our mission as a team — to enrich the educational experiences of our community by spreading STEAM through outreach and FIRST programs.”