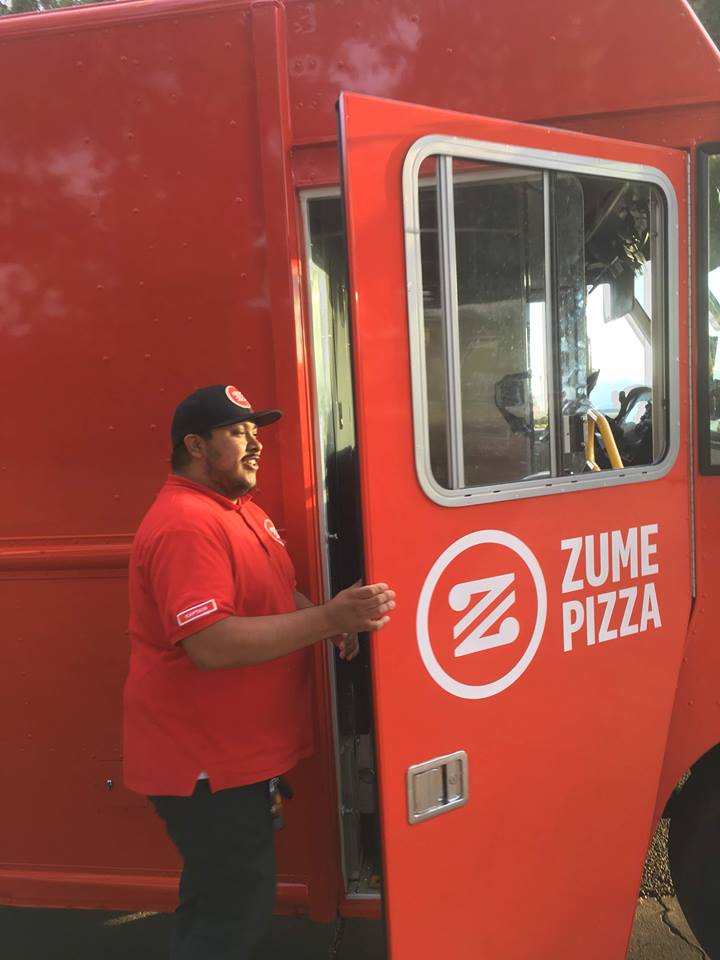 Amid the numerous RVs lined up on El Camino Real near the school, there is one truck that stands out above the other grey and brown vehicles: the red Zume Pizza truck.

While this red truck may appear as another big vehicle Palo Alto’s parents enjoy complaining about, this particular truck is the home of Zume Pizza and has a much greater backstory.

Alex Garden and Julia Collins opened Zume Pizza in 2016 in Mountain View to create high quality food to deliver to customers while piloting the latest technology in the restaurant business.

“At our base [restaurant], we have two robots named Bruno and Martha,” said José Gonzalez, an employee at the Palo Alto mobile truck. “They work with our kitchen staff to prepare the pizza for the next day. Martha is in charge of saucing the pizzas, and Bruno is in charge of putting the pizzas in the oven.”

Robots Bruno and Martha prepare the pizzas the night before at the base restaurant in Menlo Park, and the mobile kitchen staff heat up the pizza pies in the truck the next day. Gonzalez works the pizza truck right outside the Paly parking lot.

“I’m the [mobile kitchen manager] here, so I manage the truck, and I’m in charge of cooking all of the pies, and [I] make sure that all the orders go out correctly with the [vehicles] and everything,” Gonzalez said. “I just ensure that everything goes out smoothly.”

For efficiency, Zume Pizza uses robots, scooters and Fiats with the company logo on them for delivery. Other than its advanced ways of creating and delivering pizzas, Zume has also changed the way of packaging delivery pizzas which they call pods.

According to its website, “The pod your Zume Pizza arrives in is patented for good reason. Your pizza arrives warmer, crispier and tasting more like pizza, not a cardboard box. It’s 100 percent sugarcane fiber, leeches nothing into your pizza and when you’re done eating, you can feed it to Mother Earth.”

Employees and robots alike all work towards advanced pizza technology. In terms of pricing and efficiency, the robots have immensely helped the up and coming business.

“At Zume Pizza we’re based on working with robots that prepare the pizzas, and pizzas that are on the go,” Gonzalez said. “Our trucks are equipped with a high standard of ovens that can prepare the pizza under three and a half minutes.”

In addition to its Palo Alto location, Zume Pizza has opened  mobile locations all over the Bay Area.

“Right now we have three [trucks] in the area,” Gonzalez said. “One in Sunnyvale which we just launched last month, and [the Palo Alto location] which was the first one. We just originally moved from the kitchen to the trucks and now we’re running three. Pretty soon, we’re going to launch one in Santa Clara and Fremont as well.”