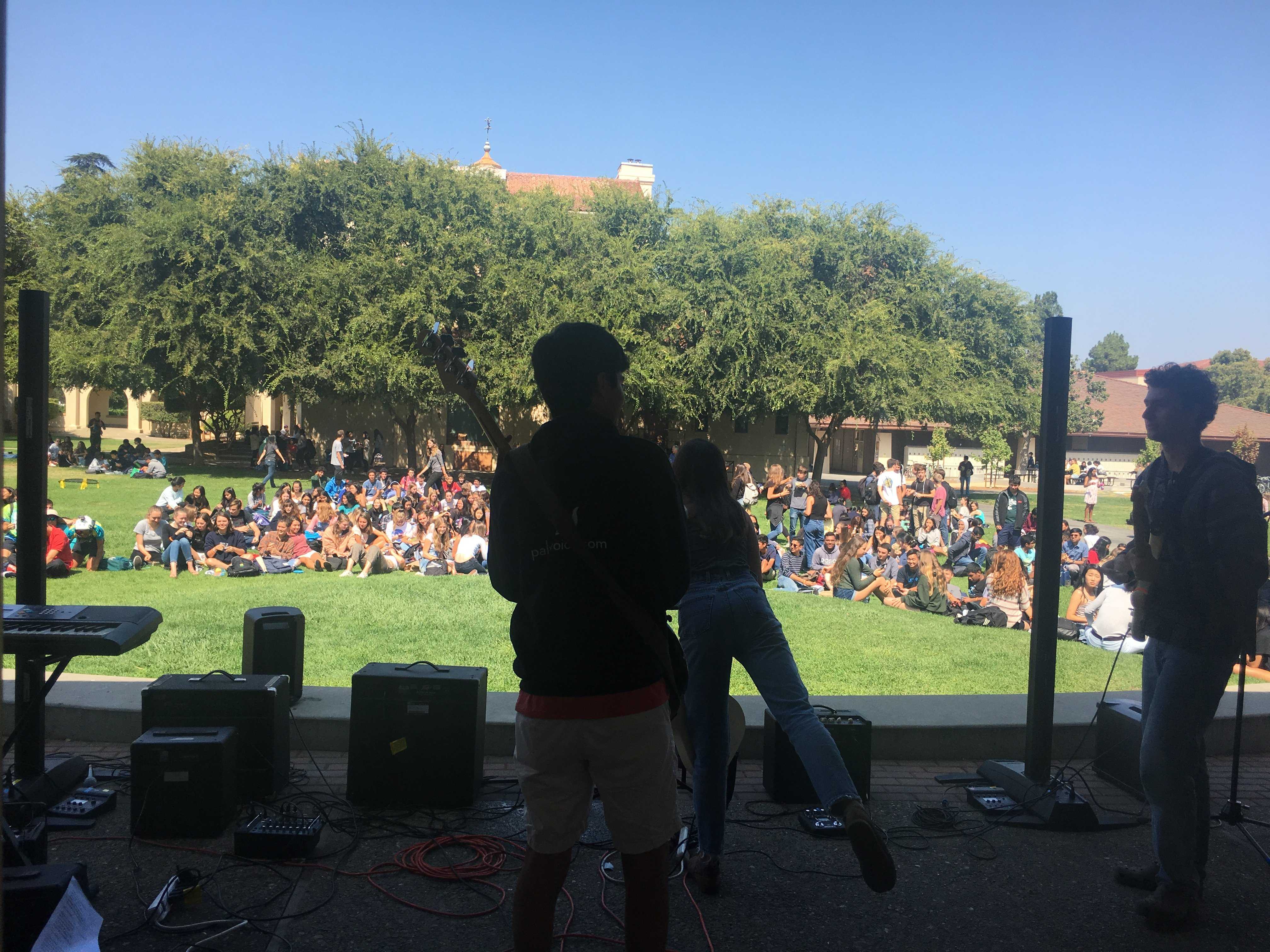 “The last couple of [performances] have been super fun, and we had a huge turnout so it was good,” Garage Mahal drummer Miles Schulman said. “I’m stoked to play.”

With the loss of regular groups such as Oscar’s Band and Romaine that were largely comprised of members of the class of 2018, a new group has emerged: Oscar’s Band Tribute Band.

“We were all big fans of Oscar’s band, who performed the last two [events], and now that he’s off hiking the [Pacific Crest Trail] (PCT) and [he’s] out of high school, we had to bring it back by tributing him,” senior band member Zach Weitzman said.

To finish off the opening day, Junior Ellie Walsh will perform alongside Junior, Amalia Larios. The duo have been practicing on their ukuleles at every chance they get in preparation for their upcoming performance.

“This year, I’m really excited about Quadside Lands,” Walsh said. “I remember Quadchella being really fun last year, but the only difference is that I didn’t perform last time. It’ll be a new experience. I’m a little nervous but not more than usual.”

Like Oscar’s Band Tribute Band, most of this year’s lineup consists of first time performers. On Wednesday, there will be a performance by seniors Olivia Brown, Anoushka Sharma and Caity Berry. Following the trio will be two solo acts: True LJ and Pierce.

“I wanted to sign up because I have a bit of a fear of public speaking, so I’m trying the exposure tactic by performing as much as possible. Also, I think it could be really fun to perform with two of my good friends.”

Although Brown has yet to perform on the quad, she has previously performed at the Palo Alto Teen Arts Council Open Mic alongside the Paly Ukulele Club.

On Thursday, audiences can expect to see the K-pop Club performance that continues to impress the crowd at every event. Following the K-pop club’s performance will be iSing, a Bay Area all-girl choir group.The final day will feature performers Drass drum/Bass, and the Improvsters.

The iSing girls will be covering various indie pop songs from bands such as Echosmith and Oh Wonder. Like many of the groups signed up for Quadsidelands, iSing is new to the Quad scene.

“We’re pretty excited and a little nervous of what people will think of us,” sophomore Emma Wu said. “I think we chose some good songs and hope people enjoy them [because] we spent a lot of time on them.”