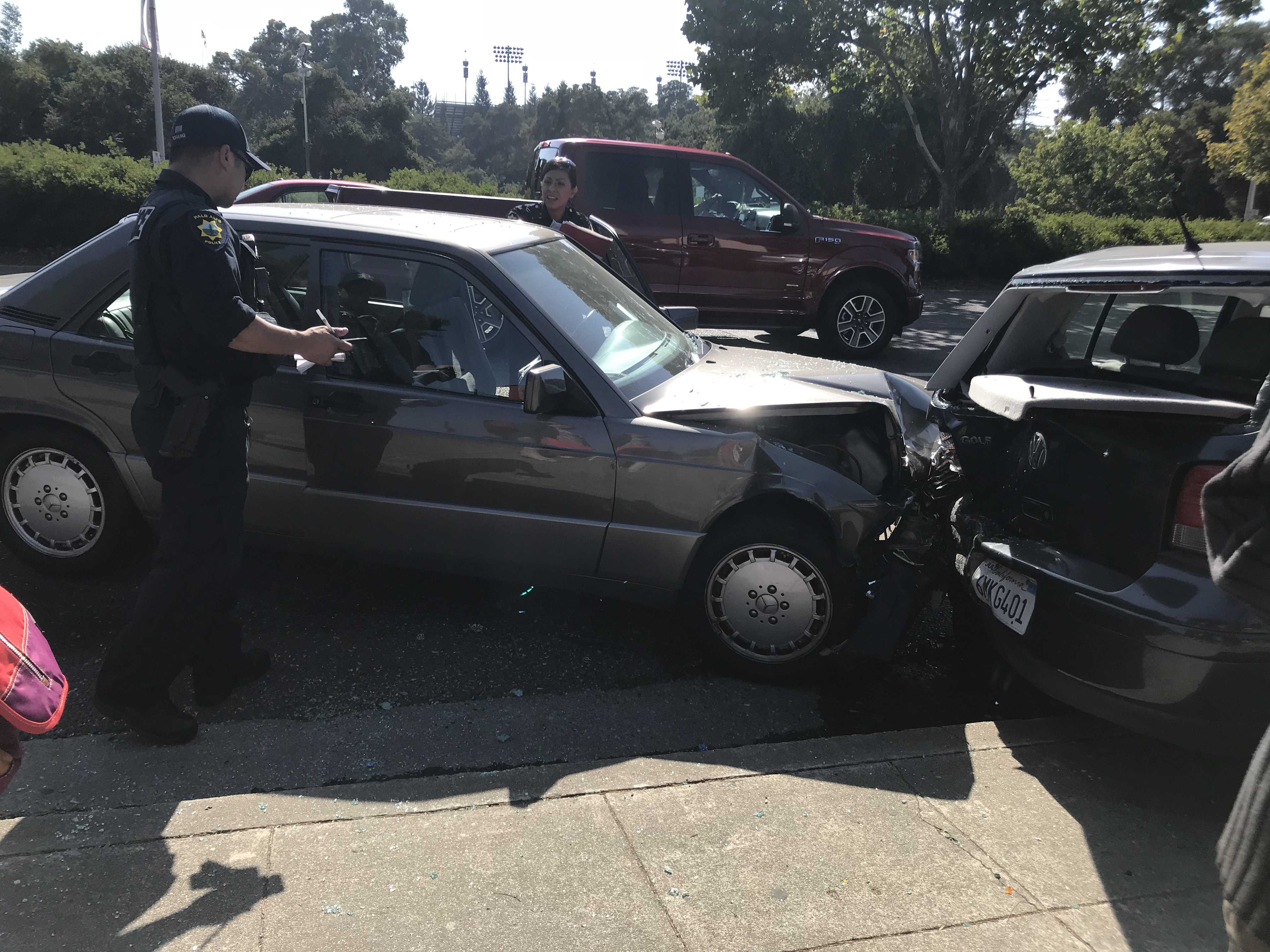 Four-car accident piles up in front of Paly

An elderly woman is currently at the hospital after triggering a chain reaction car accident on El Camino Real around 3:30 p.m. Sept. 5 at Paly’s Embarcadero parking lot.

While driving north on El Camino Real, the woman swerved and hit a parked car, reporting that she did not feel well, according to Assistant Principal Jerry Berkson. The crash subsequently hit the next two cars that were parked, damaging a total of four parked cars.

Both the Palo Alto Fire Department and the Palo Alto Police Department showed up after 10 minutes, according to Vallen Queen, Paly’s secretary to the assistant principal. Officers on the scene said that as far as they knew, there were no injuries.

Queen said she had been  sitting in the front office when the incident took place.

“I heard a crunch, there’s nothing like that sound…and I saw the smoke go up and I came out. [Campus Supervisor] Ernesto [Cruz] told me [the woman] wasn’t feeling very well and swerved; she [looked] a little disoriented.”

Queen said the woman had gotten out of her car before Queen got to the scene, but the woman was not hurt, and the parked cars were all empty.

While two of the cars are owned by Paly faculty,  one belonging to special education teacher Donna Alkadri and the other the property of a Paly administrator, the third car in the chain belongs to a student.

The Campanile Lifestyle Editor and senior Leela Srinivasan, whose Volkswagen Jetta was involved in the crash, was not informed of the crash right away. Srinivasan made her way to the scene a bit later after a small crowd had formed.

“My friend called me and told me my car might have been hit, so I came out to the parking lot, when I walked around to the front, I saw that the front was smashed as well. The front hood is jammed shut, so I couldn’t open it to look at the damage inside. ”

The tow truck arrived on the scene soon after and towed the first two cars away from the curb. Srinivasan, however, discovered that her car was driveable.

Srinivasan said, “Nothing happened when I pulled forward to make room for the tow truck, so I decided it would be safe enough to drive the car home.”