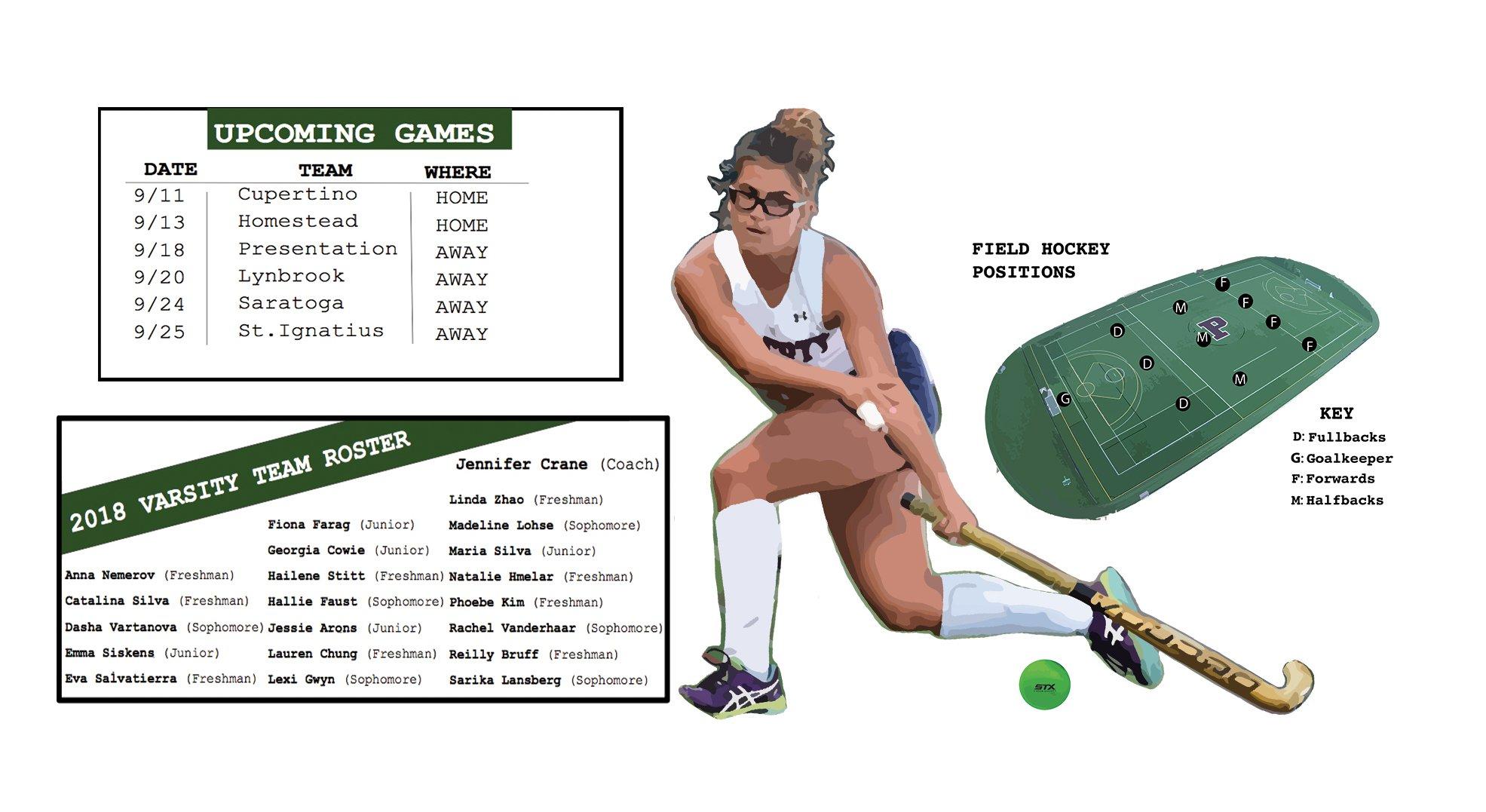 The Start of Girls Field Hockey

Gwyn first began playing the sport in Australia, where she was born and where field hockey is very popular. She went on to play for her school team in third grade and later started playing for a junior club, the University of New South Wales Sydney Hockey Club.

Gwyn moved to the U.S. as a seventh grader and knew that field hockey would be less popular, but was particularly disappointed to find out that Paly was one of the few schools in the Santa Clara Valley Athletic League that didn’t have a girls field hockey team.

“I knew other high schools in this area had field hockey but our [high school] didn’t,” Gwyn said.

“It’s really neat to be at Paly and start a program, because when I first started working here five years ago, I was very surprised they didn’t have a field hockey team just because of the community and the fact that they’re right across from Stanford, which is one of four Division One schools west of the Mississippi. It’s something that I wish was here earlier.”

When Gwyn got to Paly, she started a field hockey club as a freshman, and once a week about 12 girls would come to the lunch meetings.

Gwyn began asking girls if they would want to play for a field hockey team at Paly and got 49 signatures of support.

“That showed that there were a lot of people that were interested,” Gwyn said.

Last year, the boys’ volleyball team competed in its first season. According to Athletic Director Therren Wilburn, there needed to be an equal number of girls’ sports teams as boys’ sports teams, and in order to stay in accordance with Title IX, they began to plan and recruit for a girls’ field hockey team to start this year.

Gwyn and her mom found Jennifer Crane, who teaches Special Education at Paly, to coach for the team. Crane started playing field hockey for her high school team.

“I started playing field hockey when I was a freshman in high school as well and felt very awkward, but then I ended up getting a scholarship to play field hockey at Cal (University of California, Berkeley),” Crane said.

Crane’s senior year at UC Berkeley she was elected team captain, trained at the regional site in California and even got to play with some of the Olympic players in Virginia Beach.

“We asked her if she would be interested and at first she said no since she hadn’t been working here long and school work was hard to balance, but she later said yes,” Gwyn said.

Viking fans may not be prepared to cheer on a game they don’t understand. Essentially, there are four groups of field hockey players: halfbacks, fullbacks, forwards and goalies.

The three halfbacks are the players that usually get the most cardio in running across the field and serving as a link between offense and defense. There are three full on the field at a time and they act as the defenders. Keep an eye out for forwards since they are players that are on the offensive and mainly attack and score goals. Lastly, the goalies can use their bodies to play the ball if they’re inside the goal-circle, otherwise they can only play the ball with their stick.

“I’m looking forward to bringing people out to games,” De Martel said. “Even though I’ve never watched a field hockey game, every sport deserves publicity and support from the Sixth Man.”

Unlike most other teams, according to Crane, 90 percent of the girls on the varsity field hockey team are new to the sport.

“It is challenging,” Crane said. “To me these skills seem second nature. Field hockey in general is a very unintuitive, so it was challenging for me to bring myself back to that stage in my career and going back to the fundamentals.”

According to Gwyn, although there are some girls who have attended field hockey clinics, or played ice hockey, everyone is learning and improving together.

“Having everyone be new is really good because we can all learn off each other,” Gwyn said.

Junior Emma Siskens, is one of the 20 girls on the varsity team and is among those with little experience but a lot of interest in the sport. Siskens became interested in playing for the Paly field hockey team since both her parents played in Sweden.

“I’ve had a lot of good experiences with Paly sports,” Siskens said. “I’ve made a lot of new friends. In the end, I decided to tryout [for field hockey] because I honestly feel more efficient when I’m doing a sport.”

Siskens also echoes the sentiment that although the team is mostly new to the sport, they are ready to experiment.

“Everyone is athletic and willing to try new stuff. Even when people don’t succeed or can’t get a move down right away they don’t give up that easily. It’s a very accepting atmosphere. Whenever someone makes a mistake, people always say, ‘everything is fine’ or ‘ you got it.’”

According to Gwyn, most of the team are underclassmen, so there is plenty of room to improve the program throughout the years and develop the skills of the players.

“I think this year there should be less about winning, and more about the sport, gaining skills and getting people beyond the team interested in the sport,” Gwyn said.

Since only 29 girls tried out for field hockey, Crane was only able to field one varsity team. Instead of hosting 18 girls, the traditional amount for a team, 20 girls made the team. The girls have been practicing and scrimmaging each other for the past three weeks.

“Some teams have had programs for 15 plus years, so my goal is to grow as a team,” Crane said. “One thing I made clear to them at the beginning of the year is that I want them to be hard workers, aggressive and intense.”

“Other than being new at the sport, the team all seems to really love it and they all seem passionate about it,” Gwyn said. “That’s all you really need. Skills will come later.”